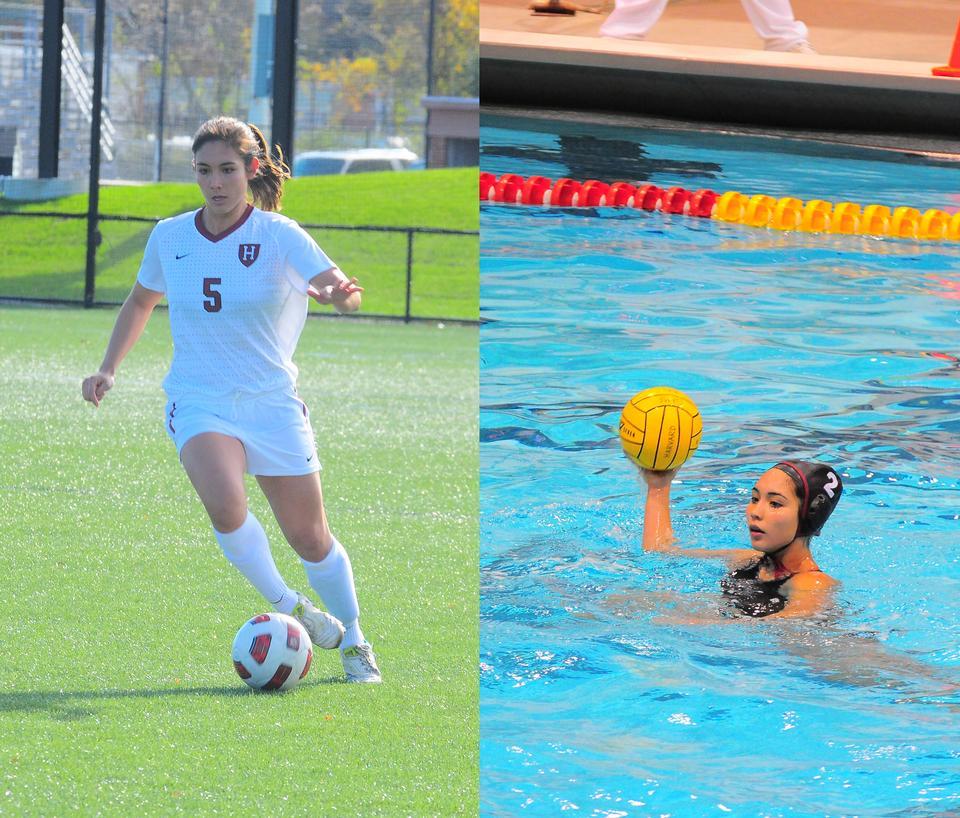 Harvard students are innately busy people. Whether it is involvement in research or drama or a varsity sport, students at the College invariably have numerous commitments. Many students play varsity sports, committing seasons or years to one game or race they love.

For a few Harvard students, though, one sport is not enough. A select few multi-sport athletes, like senior Aisha Price, who plays water polo and soccer, and junior Damani Wilson, who plays football and runs track, have chosen to juggle their time and extend their talents to two arenas.

They would have it no other way.

“It is all I have ever known,” Wilson says. “From the time I was nine years old, track season was football’s offseason and vice versa.”

Even though Harvard sports can fly under the national radar, every sport competes at or near the highest level, often playing the top schools across the country.

Most sports require commitments on six, even seven days a week throughout their seasons. In addition, athletes train multiple times per week through the offseason, with some days requiring multiple training sessions.

“Sometimes I end up making three trips across the river in a single day,” Wilson says. “During the week things can get really hectic sometimes when you combine two sports with my academic responsibilities. ”

In order to compete in two sports, these athletes must give up on the offseason time, sometimes jumping right into the next season.

“Soccer is in the fall and water polo is in the spring,” Price says. “I have that winter season to train for water polo again. Then in the summer I prepare for soccer.”

Certain sports, such as girl’s lacrosse and field hockey, are conducive to dual athletes. Junior Jen Hatfield currently plays goalie on both squads.

Track and field, a year-round sport, has multiple dual-sport athletes other than Wilson. Junior Andrew Ezekoye is also a member of the track and football teams. One of their teammates, junior Connor McCarthy, is also a forward on the soccer team.

While players like Price enjoy a few months of offseason prep, other two-sporters have no lag time at all. Wilson, for example, jumps right from football into track, a year-long commitment.

Conflicts sometimes arise when the sports are training simultaneously, as athletes must decide where to devote their limited time.

“I committed to Harvard to be a football player only, so when there is a conflict between the two I make sure to be at all football events,” Wilson says. “The coaches of both programs are clear and understanding about this.”

Wilson’s decision to join the track team did not come until his sophomore year.

“[Coming out of high school] I was open to doing either sport or even both in college but I assumed that at one point I would specialize in only one sport,” Wilson says. “When I committed to Harvard, I had only been in contact with the football program so I came in as a football player only. But after my sophomore football season, I had a few conversations with different coaches and it was eventually decided that participating in track was an opportunity I would be able to pursue. Shortly after that I decided to join the track team.”

The journey to being a two-sport athlete at Harvard is different for each athlete. While Wilson came to Harvard exclusively as a football player, Price arrived on campus with the intention of playing both water polo and soccer.

“Soccer recruiting begins early, so I got a likely to Harvard for that,” Price says. “Then I talked to the water polo coach and she wanted me as well. It’s only at Ivy League schools that you have the potential to do both.”

Both athletes pointed to their coaches as integral parts of their success.

“It was only having great coaches here at Harvard that allowed me to do this,” Price says.

For all the challenges, both Price and Wilson seem to agree that the crowded schedules have been well worth it. Price, who is in the midst of her final season as a Crimson athlete, fondly talks of the overlapping friendships on both teams.

“I think one thing that is nice is that the soccer team will support the water polo events and (vice versa),” Price says. “It is nice that both of them have been able to become friends.”

“The only time I ever was hesitant or skeptical about my decision to play two sports was during the decision-making process,” Wilson says. “Once I decided to join the track team, I never looked back. I would never give up the friendships Harvard football has afforded me.”

Not only are the student-athletes happy, but they have also succeeded at both sports. Price was a contributor throughout her career for the women’s soccer team. This spring, she is a co-captain for the water polo team.

Wilson has had an illustrious career of his own. Last year, he won two Ivy League championships in the span of three months. The football team took the Ivy League title, and Wilson individually won the 60-meter dash Ivy League Championship.

“That was very exciting, given all the work that went into it,” he says.

—Staff writer Jacob W. Lynch can be reached at jacoblynch@college.harvard.edu.