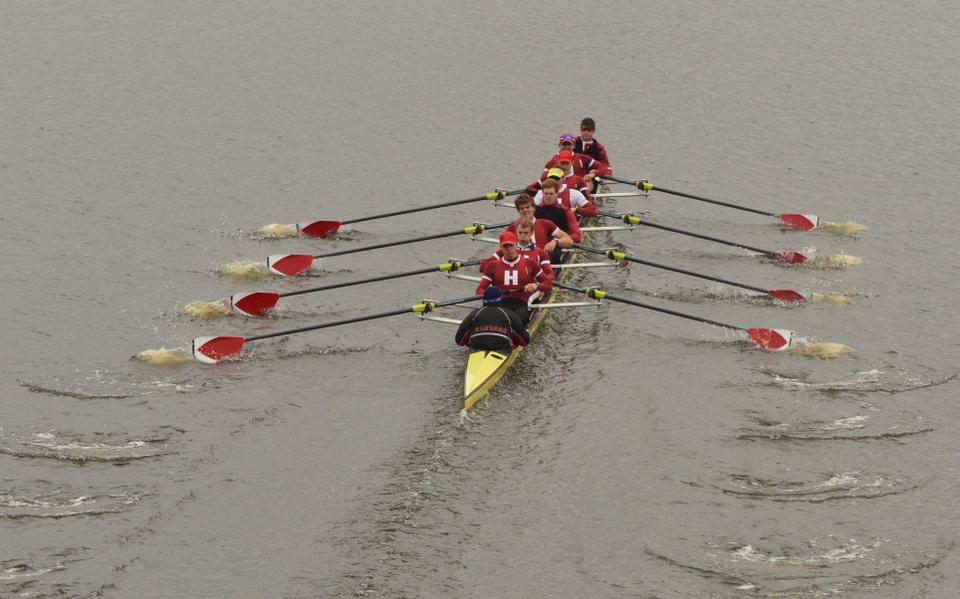 For the fourteenth time in Harvard history, both the Crimson heavyweight and lightweight crews achieved first-place finishes in the first varsity event at the 2013 EARC Sprints. The competition took place on Sunday on Lake Quinsigamond in Worcester, Massachusetts.

The Harvard heavyweights had a strong performance across the board, earning them their fourth straight Rowe Cup for best team results. With a win in the second freshmen race on top of the first varsity win, the Harvard lightweights took second place in the Jope Cup for overall team performance.

The Harvard heavyweights showed their dominance by taking both the first varsity and first freshmen races at the competition on Sunday. The Crimson’s first varsity was determined to reclaim its spot at the top after Brown had edged out Harvard by less than a second at last year’s Sprints.

“I thought that as a whole our squad had a really fantastic day,” senior Justin Mundt said. “The freshmen had a really great come-from-behind victory over Brown in their final. The first varsity had an outstanding race. It is very rare that you see a boat win the grand final of the Eastern Sprints by open water and they did so. It was a very impressive row for them.”

The Crimson faced tough competition in the second varsity race; the Harvard boat finished just behind the Tigers to take the third spot.

“In the second varsity, we faltered a little bit off the starting line,” Mundt said. “Then once we were able to get things together, we had a pretty good second half of the race. We weren’t quite able to catch up to Princeton for second place, but I thought we put in a really strong row, especially in the second half.”

“The Rowe Cup is huge for us,” Mundt said. “The senior class has now won the Row Cup all four of our years and that is something that is really special to us. That shows a commitment to creating fast boats at every level, and it only works if everyone on the team, from the top guys to the guys a bit further down, are showing up every day and putting in their best effort.”

The Harvard heavyweights will compete in IRA National Championships on May 31 and the 148th Harvard-Yale Regatta on June 9.

After taking first place in a preliminary heat, the Crimson first varsity lightweight eight bested the competition to win a gold medal in the grand final for the third straight year. Harvard finished the course in 6:03.6, defeating second-place Yale by about four seconds. Dartmouth placed third with a time of 6:09.8.

“[Sunday’s race] was the best race we’ve had all year,” senior Matt O’Leary said. “We finally put all of the pieces together that we’ve been working on from the start.”

The Crimson’s second freshmen boat was the other gold medal winner of the day, defeating Penn with an open water margin. The closest contest for Harvard was in the second varsity race, where the Crimson fought Cornell down to the finish. Both crews thought they were victorious as the race came to a close, but a photo finish revealed that the Big Red had in fact defeated Harvard by 0.67 seconds. Due to this tough loss to Cornell, the Crimson placed second in the Jope Cup for overall team performance.

“We were disappointed to lose the Jope because that is always the signifier of team depth, which this team always usually has, and which we have this year,” senior Austin Meyer said. “We had first and second boats go undefeated all year.”

The Crimson third varsity eight achieved a third-place finish in its race, coming in behind Navy and Cornell. Harvard also faced tough competition in the first freshmen race. The Crimson finished sixth in 6:39.8 with Yale, Cornell, and Penn taking the top three spots.

The Harvard lightweights will conclude their spring season by competing at IRA National Championships on May 31.