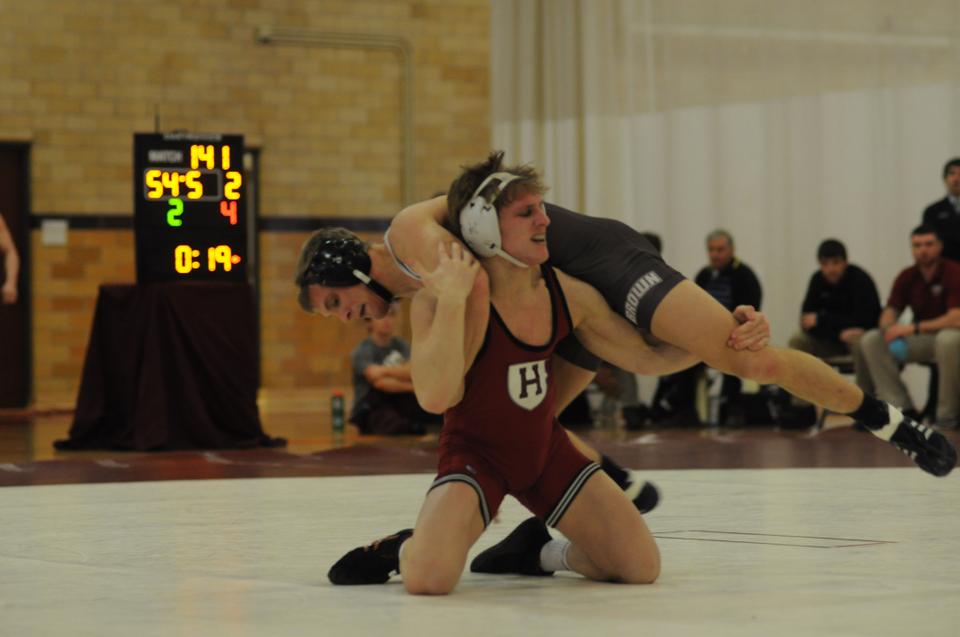 Senior Steven Keith joined Walter Peppelman in the 100-win club as the wrestling team posted a winning season that included an upset over No. 14 Lehigh and individual successes at the EIWA tournament.
By Hope Schwartz, Crimson Staff Writer

In his decorated career with the Harvard wrestling team, co-captain Walter Peppelman was twice named an All-American, placed second in the EIWA Championships after defeating the nation’s third-ranked wrestler, and won over 100 matches.

But the team was more than just Peppelman. No Crimson wrestling team in over a decade had achieved what Harvard did this season.

For the first time since the 2000-2001 season, the Crimson finished with a winning conference and overall record. Harvard, which wrapped up its regular season with an 18-16 win over Columbia, finished 8-5 overall and 6-4 in the EIWA.

Behind Peppelman and co-captain Steven Keith—also a member of the 100-win club—the Crimson ended the season on a 5-0 run going into EIWA Championships, including an upset over No. 14 Lehigh. In the Crimson’s first ever victory over the Mountain Hawks in Bethlehem, Penn., sophomore James Fox notched a key victory to put Harvard ahead, and the Crimson never relinquished the lead.

“It’s a great atmosphere to wrestle in,” Harvard coach Jay Weiss said. “We said we were going to have to go in there and have no fear and just take it to them. ”

The Lehigh match proved to be only one of many times that underclassmen would step up in key moments for Harvard. The Crimson’s 28-man roster contained eight freshmen and four that started consistently. Though only Jeffery Ott finished with a winning record, the rookies played key roles in several close matches throughout the season.

At 125 pounds, Ott went 21-15—including an 8-5 dual meet record—and was one win shy of making NCAA Championships, finishing fifth at the EIWA Championships. Classmate Devon Gobbo placed seventh in the same tournament in the 165-pound division. The freshmen were two of eight Crimson wrestlers to place at the event, the most since 2001.

“Confidence is a huge thing in any sport, and you’ve got to develop that confidence in the freshmen,” Weiss said. “They came from some of the top high school careers in the country, and in six months they’re wrestling at the Division I level. ”

After individual success at the EIWA tournament, Peppelman, Keith, and Fox earned bids to the NCAA Tournament in Iowa. Peppelman went in as the No. 11 seed but fell in the first round. Keith fared better in the first round, winning his match, but ultimately lost to the top seed in the next round. Fox lost both of his matches and was eliminated in his second tournament appearance in as many years.

Stepping off the mat for the last time in Des Moines, the seniors capped two of the most accomplished careers in Harvard history. Peppelman finished with 111 wins—good for fifth in program history. Keith’s 107 wins moved him into seventh.

Though Peppelman competed in his third straight NCAA Tournament, he was not named an All-American as a senior.

“I came up short at the end of the season, and that was painful, but those are the experiences that you learn and grow from,” Peppelman said. “I’m happy for what I have, and even though it didn’t end the way I wanted, my career is something I will cherish forever.”

The Crimson opened its dual meet season with a win over Rider at home but dropped five of its next seven matches. Harvard fell to Penn, 24-6, on Feb. 9 after losing a number of close matches but rebounded the next day to cruise to a 27-6 victory at Princeton.

After defeating the Tigers, the Crimson wouldn’t lose again. Closing out the season, Harvard outscored its opponents 120-54 down the stretch, including a close 16-15 victory over Columbia at the Malkin Athletic Center.

Keith and Peppelman both notched victories in the final conference matches of their careers, while Ott and fellow freshman Nick Gajdzik also picked up wins at 125 pounds and heavyweight, respectively. The Crimson came back from a 15-9 deficit after Fox soundly defeated his opponent in the 195-pound match.

Gajdzik rode Fox’s momentum and clinched the win for Harvard with a 2-0 victory to move to 7-9 on the season.

“The freshman class really pulled together from the start of the season,” Weiss said. “There is a real strong character on the team right now. It has been a lot of fun to coach, and it’s going to take us places in the future.”