With a planned move to Allston, SEAS will have to grapple with maintaining integrated in the liberal arts education 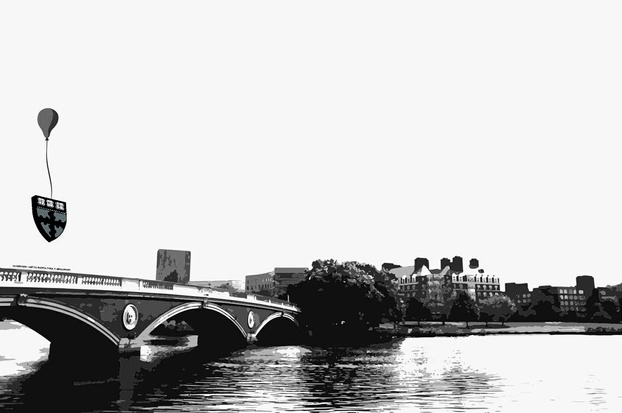 The decision to move SEAS to Allston has some faculty and students worried that physical distance will hinder the school's mission of integrating engineering and applied sciences with the liberal arts.
By Jessica A. Barzilay and Sabrina A. Mohamed, Crimson Staff Writers

In the spring of 2008, 15 undergraduates presented their final project for Engineering Sciences 96: “Engineering Problem Solving and Design Project” on “Bridging the Gap: Connecting Harvard’s Allston and Cambridge Communities.” The topic was particularly relevant at the time, with planning for the Allston Science Complex well under way, but it would lose valence just a few months later, when the financial crisis pummeled Harvard’s endowment and halted all construction indefinitely.

Now the report is newly salient: this February, University President Drew G. Faust announced that the School of Engineering and Applied Sciences will almost entirely relocate to Allston as development across the river resumes. The move, whose announcement was called the “Allston bomb” by one faculty member because of its abrupt timing, has nonetheless been heralded as an opportunity for much-needed expansion as SEAS continues to see its concentration numbers—and the external demand for engineers—balloon.

Still, the move will physically distance the engineering school from the undergraduate heart of Harvard’s Cambridge campus. And though facilities in Allston will not be ready until at least 2017-18, faculty members and students alike have already begun expressing concern regarding SEAS’ ability to remain integrated in a liberal arts education from its future home across the river.

With a recent upswing in professional positions that prize engineering skills, the growth of SEAS has been catalyzed by a global interest in engineering and the applied sciences. Data collected by the National Science Foundation in 2010, for example, suggests that individuals with advanced degrees in engineering have higher employment rates.

“In recent years, there has been a greater emphasis on STEM [science, technology, engineering and math] subjects in the K-12 system, and more high-achieving college-bound students see engineering and applied sciences as viable and desirable career paths,” wrote SEAS Dean Cherry A. Murray in an email to The Crimson.

For many Harvard undergraduates, interest in engineering has pivoted around the field of computer science, which students see as a stepping stone to both startup work and conventional programming careers.

Having nearly doubled in size over the last two years, computer science is Harvard’s fastest-growing concentration. Its reach has stretched beyond the traditional engineer in large part because of Computer Science 50: “Introduction to Computer Science,” which has expanded under lecturer David J. Malan ’99 to enroll more undergraduates than any class except Economics 10: “Principles of Economics.”

“I think there’s a new entrepreneurial spirit amongst the students,” said J. Gregory Morrisett, a computer science professor. “They’ve seen the success of things like Facebook and realize they could do it too.”

In addition, professors said that an increasing demand for technological gadgets and medical devices may necessitate a generation of Americans capable of domestic engineering production. Engineering Sciences 50: “Introduction to Electrical Engineering,” the electric and mechanical engineering equivalent of CS50, has grown from 19 to 164 students in just five years, and the overall number of concentrators in SEAS has increased from 291 to 678 since the school was founded in 2007.

“We’re trying to show students and get them excited not just about writing programs, but also playing with the hardware, building things, electrical devices,” said electrical engineering professor Marko Loncar.

Professional opportunities have not only increased the appeal of SEAS but also generated new possibilities for entrepreneurship through collaboration with the Graduate School of Design and Harvard Business School.

“We’re trying to design even more classes along these boundaries and make additional bridges with disciplines not traditionally connected to engineering,” explained Loncar.

As the global desire for engineering skills and tools has bolstered interest in the field, SEAS has promoted its own growth through internal efforts such as the restructuring of introductory classes, the implementation of innovative teaching methods, and an emphasis on hands-on design.

Murray has echoed the importance of integration between engineering and the liberal arts and has repeatedly stated her objective that “all graduates, whatever their field, leave [Harvard] with a well-developed literacy in technology.”

Morrisett, who teaches Computer Science 51: “Introduction to Computer Science II,” said that the broad appeal of these courses attracts a community of students who might not intuitively consider themselves engineers.

“In CS50 and CS51, we try to draw on domains that aren’t just for nerds; 51 has problem sets that deal with music or 50 has problem sets that deal with photography and imagery,” Morrisett said. “Once you have a good cohort of students that aren’t just engineers, it becomes a lot easier for students to team up and take those kinds of classes together.”

Thanks to its rapid growth and industrial connections, SEAS has continued to receive generous funding despite the economic decline and funding cuts to research across the nation.

“There’s a big pool of money that’s partly driving the expansion of the faculty,” said David D. Cox ’00, an associate professor in molecular and cellular biology and computer science, explaining that this support is not as reliable in other parts of the University.

In addition to planning new facilities in Allston, Loncar said the University has accommodated alternative formats of learning and teaching through expanded budgets for classroom ventures. In Loncar’s class ES50, for example, each student group received around $100 to build a final project.

“When we actually introduced the final project component where students build hardware and design cool stuff instead of the final exam, enrollment skyrocketed,” Loncar said.

When archaeologists embarked on a mission to save the Dead Sea Scrolls—a collection of 2,000-year-old documents that contain the earliest known copies of the Hebrew Bible—they enlisted SEAS’ help. A room full of computer scientists and engineers discussed ways to determine rates of decay while historians worried whether the documents could survive another two millennia of natural decline.

This interdisciplinary partnership, orchestrated by the Harvard Initiative for the Science of the Human Past, is part of the newly emerging field of digital humanities.

“[The project] just evinces this sort of breadth of reach of engineering and computer science into just about everything,” said Cox, who was among the SEAS faculty consulted for the initiative.

Engineering tools can shape the way humanities are studied, but the study of engineering itself also overlaps substantively with a wide range of fields. Administrators said that SEAS especially hopes to capitalize on these connections by integrating an engineering mindset into other divisions on campus.

“Atmospheric research will continue to intersect with earth science; bioengineering will always learn from OEB and genetics; data privacy crosses over with the social sciences and law; and applied mathematics frequently lends insights to economics,” wrote Murray. “The reality is that across Harvard, we all benefit from our strengths in diverse fields.”

Executive Dean for Education and Research Fawwaz Habbal confirmed that the SEAS mission is inextricable from Harvard’s broader commitment to providing students with a strong liberal arts foundation.

“We don’t feel that our mission will be fulfilled without liberal arts. We have no intention to become a mini-MIT, a mini-Georgia Tech,” he said. “We are inside Harvard for a function.”

Some professors fear, however, that a geographical separation between SEAS in Allston and the rest of the FAS in Cambridge could hinder important elements of SEAS’ mission—widening the scope of engineering to non-concentrators and producing engineers who understand the humanistic context of their work.

The distance could, some professors argue, sever student interaction and strain professors with joint appointments, who would have to meet teaching and research obligations in both locations.

SEAS professors and classes are currently housed across eight buildings, all located on the north end of the Cambridge campus. Current physical separations do not obstruct collaboration, Habbal said, adding that he is confident that the move to Allston will allow for the creation of common spaces that encourage faculty bonds and “provide a green field for new ideas.”

“We are not living under one roof but we found a way to create a connection,” Habbal said.

Proponents of the move highlight not only SEAS’ desperate need for more space but also the proximity of the Harvard Innovation Lab and the Business School in Allston as assets that will foster an entrepreneurial culture and new spaces for creative programming.

Still, whether the advantages outweigh the physical effects of distance is a “non-stop topic of conversation” for SEAS faculty, according to Cox.

“I know the Business School is excited about having SEAS next door because of the obvious entrepreneurial connections,” he said. “I’m not sure that the SEAS faculty is outrageously excited about that necessarily when balanced with all the collaborations that will be harder to have on the main campus.”

Students, too, have expressed reservations about the effects of the impending move on their academic experience.

On its online fact page, SEAS specifically highlights its proximity to five FAS departments. For a school that prides itself on its connections with neighboring disciplines, the loss of those neighbors could have long-term implications for its interdisciplinary focus.