Team of the Year: Men's Basketball 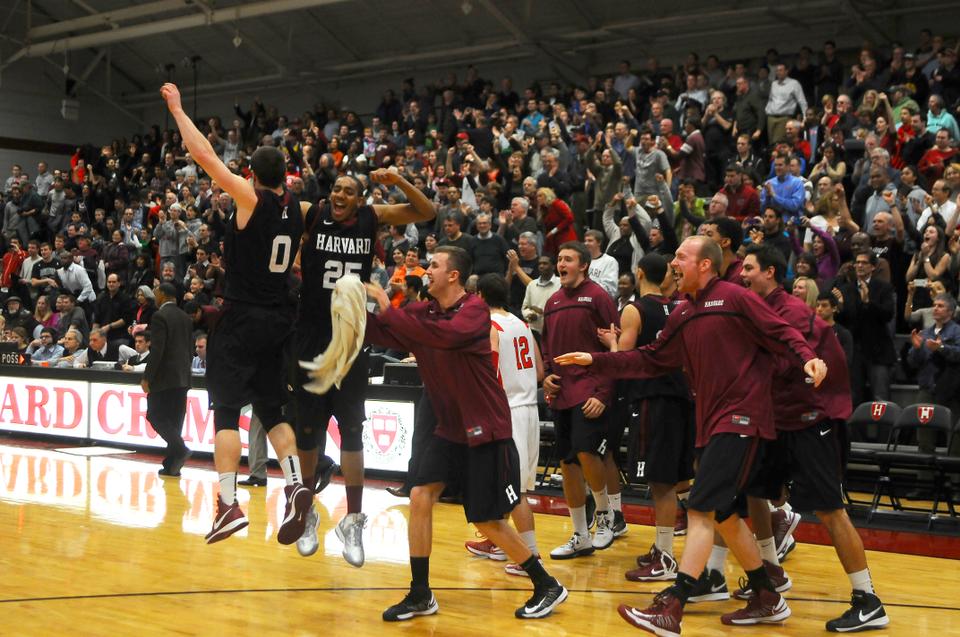 After making its first NCAA tournament in decades last season, the men’s basketball team took another step forward this season. The team captured an Ivy title in the season’s final weekend and then took down heavily favored New Mexico, 68-62, in the second round of the NCAA tournament.
By Scott A. Sherman, Crimson Staff Writer

Entering the 2012-13 season, there were few things the Harvard men’s basketball program had yet to accomplish.

Coming into this season, only one significant unchecked box remained on the team’s list of goals—winning a game in March Madness.

But on March 21, that milestone was finally reached when the Crimson stunned the college basketball world with a 68-62 win over New Mexico. The victory over the third-seeded Lobos turned the No. 14 Crimson into an early tournament Cinderella and marked the squad’s first-ever victory over a team ranked in the Associated Press Top 10.

“This is the type of thing you dream about in your backyard,” sophomore Wesley Saunders said after the contest. “For it to actually happen now is incredible.”

At the beginning of the season, few gave the Crimson a chance of achieving that goal.

Before the squad had even played its first game, the team’s co-captains, seniors Kyle Casey and Brandyn Curry, left the College after being implicated in the Government 1310 cheating scandal.

Their departures cost Harvard its leading scorer and a first-team All-Ivy forward in Casey and its floor general and assists and steals leader in Curry. Only a trio of inexperienced sophomores—Kenyatta Smith, Steve Moundou-Missi, and Jonah Travis—remained at the forward position, while rookie Siyani Chambers was the best remaining option at point guard.

But despite the voids left by the departure of his two stars, Amaker told his team that it still had enough talent to compete.

“We might not have what we had, but we have enough,” Amaker repeatedly said, and the squad, picked in the preseason to finish second behind Princeton in the conference, took that message to heart as a number of players elevated their games in the absence of their two talented teammates.

Chambers ran the offense like a seasoned veteran and surpassed all expectations, leading the nation’s freshmen in assists and minutes per game. The rookie point guard scored 21 points in Harvard’s fifth-straight win over Boston College, hit a game-winning jumper with four seconds remaining against Boston University, and poured in 22 to rally the Crimson to a road win at Dartmouth in its first league contest.

“It was beautiful to see how he was able to perform,” Amaker said. “Being a first-year kid, the impact he had was off the charts.”

Saunders improved his scoring output from 3.3 points per game as a freshman to an Ivy League-best 16.2 as a sophomore, tallying double-figures in every regular season contest while defending the opponent’s best perimeter scorer.

“We leaned on him so much,” Amaker said. “He was the best all-around player in our league.”

The young pair were both chosen to the All-Ivy League first team, with Chambers becoming the first freshman to ever receive that honor. Despite a grueling schedule, the duo helped Harvard go 8-6 during non-conference play, highlighted by a 67-62 road upset of California on Jan. 29.

The Crimson also received key contributions from co-captains Laurent Rivard, the junior who broke the program’s single-season three-point record, and Christian Webster, who provided valuable leadership as the team’s lone senior. Webster contributed some magical moments as well, most memorably when he hit three consecutive three-pointers to spark Harvard—down 10 with 93 seconds to go—to a dramatic overtime win over Dartmouth on Jan. 26.

But it was the late-season emergence of Smith, the talented sophomore center, which changed the entire dynamic of the squad. After getting benched following a slew of early-season turnovers, the former top recruit won his starting job back before a Feb. 15 home contest versus Penn. Against the Quakers, Smith delivered a stellar performance, registering a near-triple double with 20 points, a program-record 10 blocks, and nine rebounds. From there, the center never looked back, providing the team with the two-way interior presence it had lacked to that point.

Yet despite all the individual successes, a February loss at Columbia and a road sweep at the hands of Princeton and Penn in the season’s penultimate weekend meant the team still needed help to win its third-straight Ivy League title as it prepared for its final two games against Columbia and Cornell at Lavietes Pavilion.

The Crimson took care of business at home, storming back to beat the Lions, 56-51, and then knocking off the Big Red, 65-54, the following night.

Thanks to a Princeton loss to Yale the previous evening, the latter victory gave Harvard a share of the league championship, and within moments, when the Tigers were defeated again—this time by Brown—the Crimson had won the title outright and was headed to March Madness for the second consecutive year.

In Salt Lake City, behind 18 points from Saunders and 17 from Rivard, Harvard pulled the upset nobody saw coming. Though the Crimson had blown late second-half leads against the University of Massachusetts, Saint Mary’s, and Memphis during the regular season, the squad refused to back down against the Lobos, as it withstood a New Mexico run to take a one-point lead with six and a half minutes to play, answered right back, and closed down the stretch to earn the win.

Though Harvard was overmatched in its third-round contest, falling to sixth-seeded Arizona by a score of 74-51, its season as a whole, against all odds, was once again marked by the accomplishment of another major program first.

“It was a significant moment and achievement,” Amaker said. “[It’s] something that I’m incredibly proud of our kids for accomplishing.”