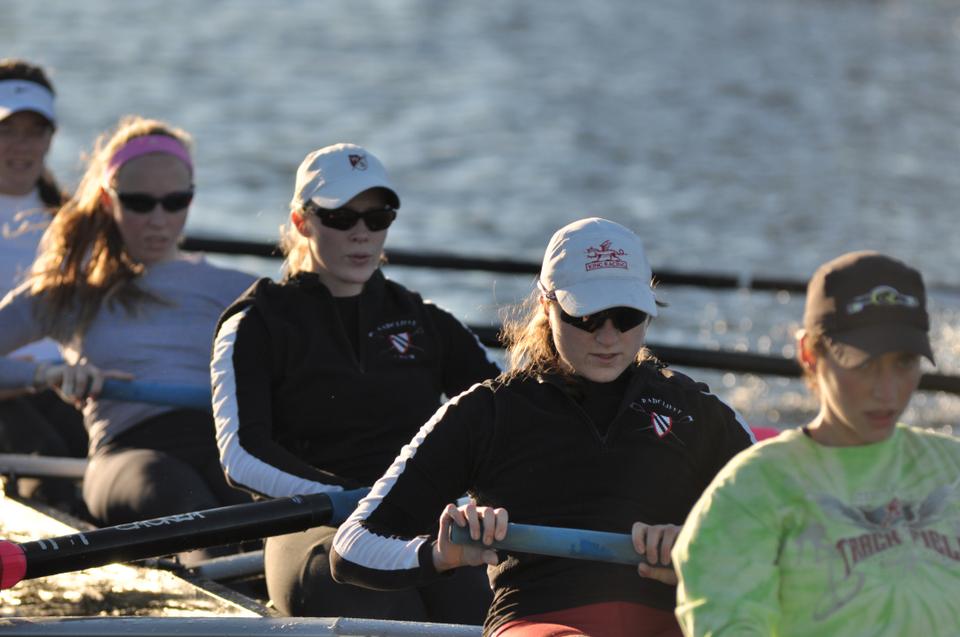 Although the season is not yet over, the Radcliffe lightweight team has already made history. The team’s victory at the Head of the Charles was the squad’s first ever win in the event.
By Samantha Lin

With the NCAA Championships at the end of May, the Radcliffe heavyweight crews will row with something to prove.

“We had a really strong performance in all three events, the 1V8, 2V8 and varsity four [at Ivy League Championships],” heavyweight coach Liz O’Leary said. “In a conference where we’re competitive, that bodes well for us. You don’t ever want to jinx yourself, but I’m optimistic.”

After losing to Brown to start the spring season, the Black and White bounced back by taking down fifth-ranked Princeton and Cornell to claim the Class of 1975 Cup, showing that its crews could compete with the best in the nation.

But then Radcliffe hit a snag in its dual meet with Yale and Northeastern. A clashing of oars in the 1V8 race between the Black and White and the Bulldogs led to a controversial result. However, in the end, the officials upheld the original outcome, where the Yale boat edged the Radcliffe crew by 1.6 seconds.

Radcliffe’s second-ranked 2V8 crew suffered its only loss against the Tigers before the Black and White took on Ohio State. The Buckeyes’ top-ranked 2V8 crew handed Radcliffe’s 2V8 its second loss of the season before that boat, with a few lineup changes, claimed the silver medal at Ivy League Championships.

Although none of the boats entered in the Ivy Championships would come home carrying the gold medal, all six boats qualified for finals from the heats, and five of the six boats medaled in their final races, good enough for a second-place team finish behind Princeton.

“The heats are important because you want to be in the A final and also because anybody could qualify in any given event, so you have to be on your A game even for the morning heats, so I was happy that all of our boats did qualify,” O’Leary said. “Only four of the eight Ivies got all of their boats into the A finals, so that was the first level of success.”

Despite not repeating as Ivy champions, O’Leary is optimistic about the team’s chances at NCAA Championships after solid performances throughout the year.

“Over the course of the season, everybody figured out what it is to be competitive, nationally competitive, and worked hard to make changes,” O’Leary said. “I think one of our goals for the year was to have a strong team in all categories, and I feel very strongly that this team has risen to the occasion and done a good job all year long in training and training with that goal in mind.”

After taking bronze at the Eastern Sprints in each of the last three years, the Radcliffe first varsity boat was ready for a change this season. A year after the second varsity boat took the first gold medal ever for the Black and White at Sprints, the top boat appeared to be ready to break to the top of the podium with its first undefeated season in over five years.

“You never know how fast your competitors are going to be, but within our own program, it was just a lot of hard work from sticking to the training plan we worked on last year that definitely got us faster,” said Emma Lukasiewicz, sixth seat of the 1V boat. “We won our first sprints medal in the [second] varsity eight last year, and it was really building off of that and getting a lot more base fitness and improving technique throughout the year that really got us where we ended up.”

Radcliffe entered the regatta ranked first in the nation and did not disappoint, outpacing second-place Princeton by over eight seconds in the varsity eight grand final to take home its first gold medal of the season in the title race. But the 1V’s gold medal was just the beginning of the hardware—both the 2V and 3V boats crossed the finish line first to sweep all of the varsity events.

“With rowing, it’s just a lot of hard work, and it’s really neat that it paid off for us, especially across all levels of the program, to have our novices have a good dual season and our three varsity boats winning Sprints,” Lukasiewicz said. “It was really neat to have that depth.”

The lightweights kicked off their year with an unprecedented start, winning the Head of the Charles for the first time ever. Later in the year, the crews picked up in the spring season right where they left off, dominating the Beanpot to begin the spring and continuing with a win over Georgetown.

The Black and White got the chance to showcase its speed at the Charles River Lightweight Invite, where then-No. 2 Radcliffe took on top-ranked Stanford. The 1V boat created an open-water lead over Stanford during the third 500 and held on to topple the reigning national champion and enter Eastern Sprints as the top-ranked crew.

Though the school year may be over, the Radcliffe lightweights have not yet finished their season. The crews head to Sacramento, Calif., on Friday to take on the Stanford Cardinals once again, this time with the rankings swapped, at the IRA National Championships.

“We knew that we had to stay focused because there’s a lot of good competition out there,” Lukasiewicz said. “We didn’t race against Stanford in Sprints, and they’re a really fast program. I think it’s a matter of staying focused and not getting complacent. Everyone’s definitely really excited, but it’s going to be a lot of work, and we’re looking forward to it.”