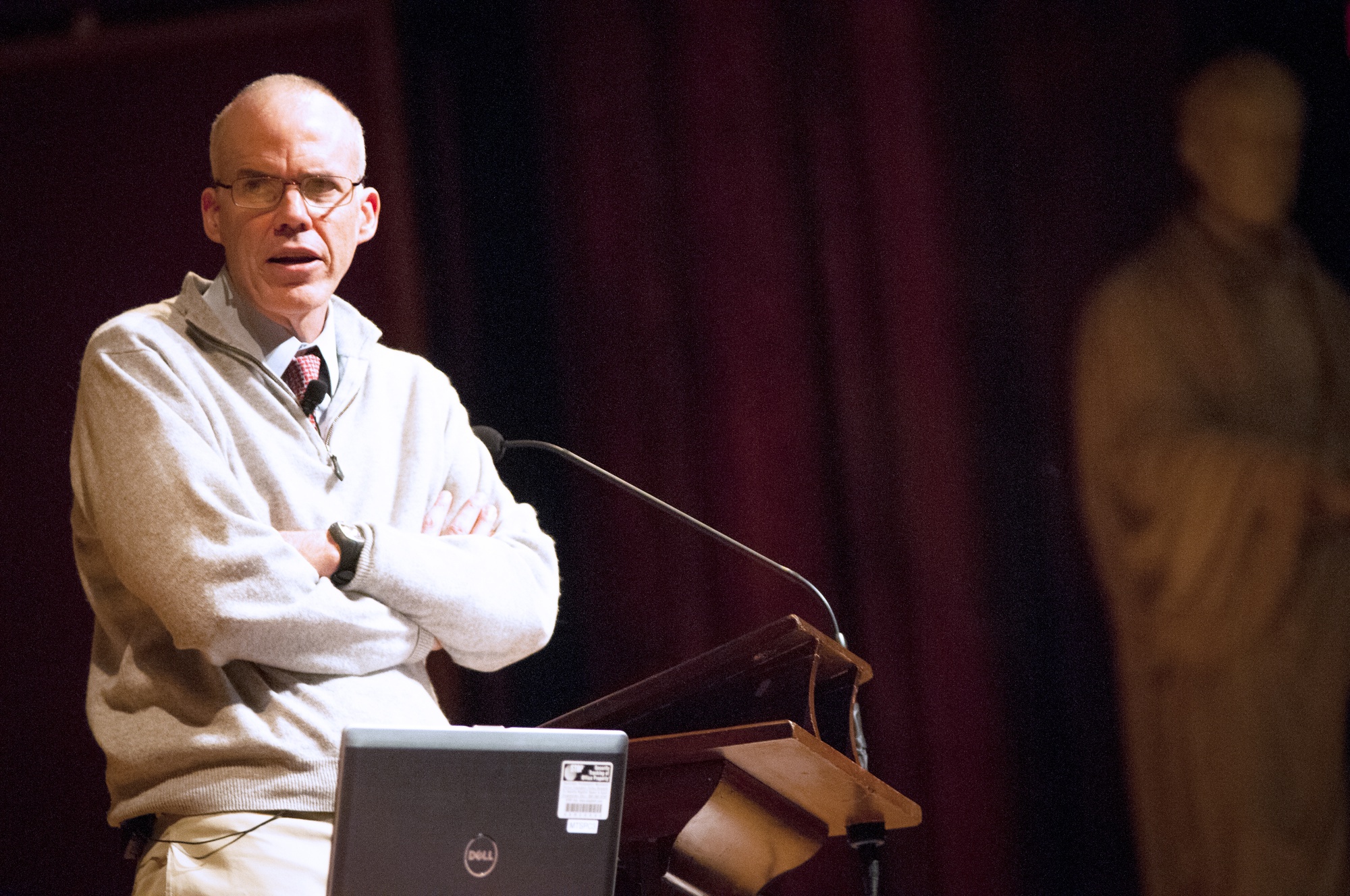 Bill E. McKibben ’82, environmentalist and author of “The End of Nature,” conducts a lecture on climate change and fossil fuel divestment at Sanders Theatre on Tuesday afternoon.
By Meg P. Bernhard, Contributing Writer

Environmental activist Bill E. McKibben ’82 called on hundreds of audience members in Sanders Theater to join “the fight” against the fossil fuel industry on Tuesday.

“You all will spend the rest of your lives dealing with the effects of climate change,” McKibben told the audience. “There’s a real stake in acting now.”

McKibben, who in 2007 founded a grassroots environmental organization with seven Middlebury undergraduates, argued that everyone can take action to create political change. In the lecture, he especially targeted large fossil fuel companies like ExxonMobil.

“Learning isn’t sufficient,” said McKibben, a former Crimson president. “We’ve won the argument scientifically. This can’t actually be solved by one light bulb at a time.”

McKibben said he knew his organization did not have the resources or financial power to outspend powerful companies, but it could still weaken them by encouraging institutions to divest.

350.org, McKibben’s organization, has coordinated 20,000 demonstrations in more than 180 countries. The organization draws its name from a statement that NASA’s James Hansen made in 2007, which said that 350 parts per million is the threshold for safe quantities of carbon dioxide in the atmosphere.

“I thought environmentalism was something rich white people do,” McKibben said, sharing photographic images of 350.org’s diverse global campaign. Instead, McKibben said people across the world—from Afghanistan to the Congo—have vested environmental interests.

McKibben’s stature among environmental activists stems from his 1989 book entitled “The End of Nature.” He described it as “the first book for a general audience about climate change.” His interest in divestment draws inspiration from similar efforts that encouraged American institutions to stop investing in South Africa in the mid-1980s.

According to McKibben, today the stakes are high.

“Physics is well ahead of us,” he said.

McKibben noted that in the past 40 years, 80 percent of the ice in the world’s oceans has melted. He also pointed to current events, such as the record-breaking rainfall in Colorado last week and the recent typhoon in Japan, to illustrate the consequences of climate change.

Audience member Jean Bonney said she and her husband agreed “one hundred and fifty thousand percent” with McKibben.

The lecture, titled “Oil and Honey” after his latest book, was hosted by the Harvard Institute of Learning in Retirement.