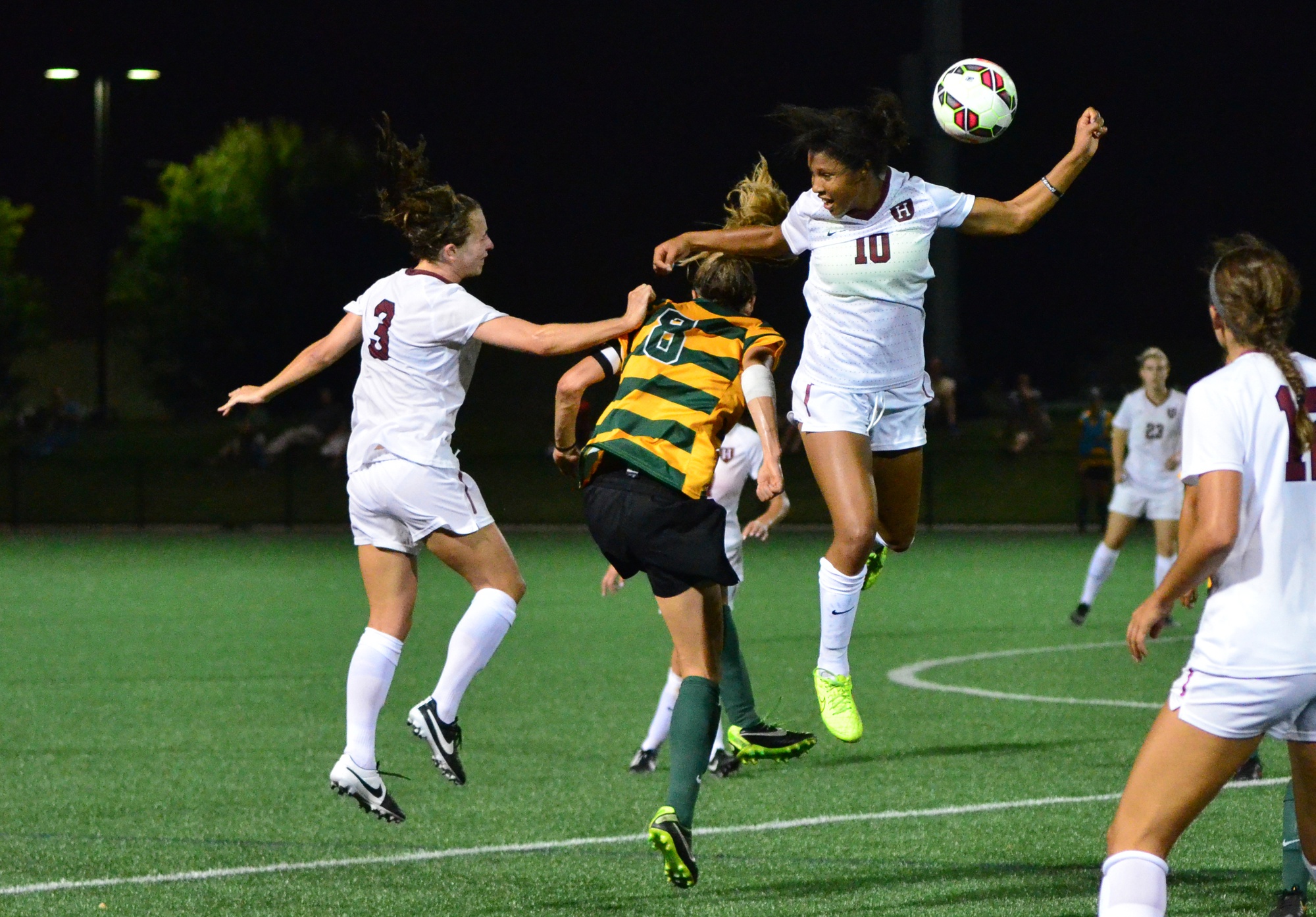 With the score knotted at 4-4 in the 81st minute, sophomore forward Midge Purce converted a penalty kick for what ultimately proved the winning goal as the women’s soccer team outlasted Princeton, 5-4, in a wild back-and-forth game on Saturday at Stevenson Field.

The victory keeps Harvard (9-3-2, 4-0-1) atop the conference standings and extends the Crimson’s Ivy League unbeaten streak to 13 games.

The Tigers (5-5-3, 2-2-1) appeared poised from the opening whistle to hand the Crimson its first league loss since 2012. Sophomore forward Tyler Lussi scored on the first shot of the contest just over a minute in to put Princeton ahead.

The tally put Harvard in an unfamiliar position, as it marked the first goal surrendered by the Crimson in Ivy League play this year.

For most of the half, Princeton clamped down and Harvard could not produce an equalizer against the physical Tiger defense. Princeton harassed the Harvard forwards and midfielders, specifically targeting Purce. The Crimson drew eight fouls in the period, and it was the final one of the frame that ended up getting Harvard back in the contest. Freshman midfielder Dani Stollar put home the free kick from senior Bethany Kanten with just three seconds left in the half to tie the game, 1-1.

“We played quite poorly in the first half,” Harvard coach Ray Leone said. “We just weren’t matching the intensity of Princeton, weren’t first to any balls. We were just kinda hanging on, and just getting that goal with three seconds left in the half really changed everything.

Kanten, a former full-time goalkeeper who started one game in cage this season while also transitioning to midfield, had a career game for the Crimson. Less than three minutes into the second half, she found the back of the net on a free kick from 25 yards out to give Harvard a 2-1 lead and start an offensive flurry that saw both teams combine for five goals in 17 minutes.

“[Kanten] just needed more experience and more opportunities, and that’s what she’s gotten this year,” Leone said. “[Saturday] was a special day for her, because we were struggling and we were just looking for a spark. The combination of the fouls and her specialty of being an incredible set-play taker, it was a good combination for us.”

After Kanten’s tally, Princeton responded with a run of its own as Lussi scored her second goal of the game in the 53rd minute to even the score again. Just eight minutes later, Lussi completed her hat trick as the Tigers regained the lead.

While it took the Crimson almost an entire half to equalize after Princeton’s opening goal, the Crimson needed just 32 seconds after the Tigers’ third marker to knot the score at 3-3 on a tally by sophomore forward Joan Fleischman.

Harvard took its first lead of the second half on the second goal of the game for Kanten, this one a corner kick that curled into the net to put the Crimson ahead, 4-3.

After a deflected Princeton corner kick found goal to tie the game at four, the two squads entered the final ten minutes of the game with first place in the Ivy League still in the balance.

In keeping with the major theme of the game, the outcome was ultimately decided by a Tigers’ foul. The foul occurred in the box, resulting in the penalty kick by Purce that gave the Crimson the win.

Ultimately, Princeton’s strategy of limiting Purce and the rest of the Harvard offense through physicality seemed to backfire, as three of the Crimson’s goal came directly off free kicks and penalty kicks.

“Princeton definitely played physical, but we expected that just because every Ivy League game is a battle and we were ready for it.” Harvard co-captain Marie Margolius said. “We just tried not to let it rattle us and no matter what happened, we continued to play our game.”