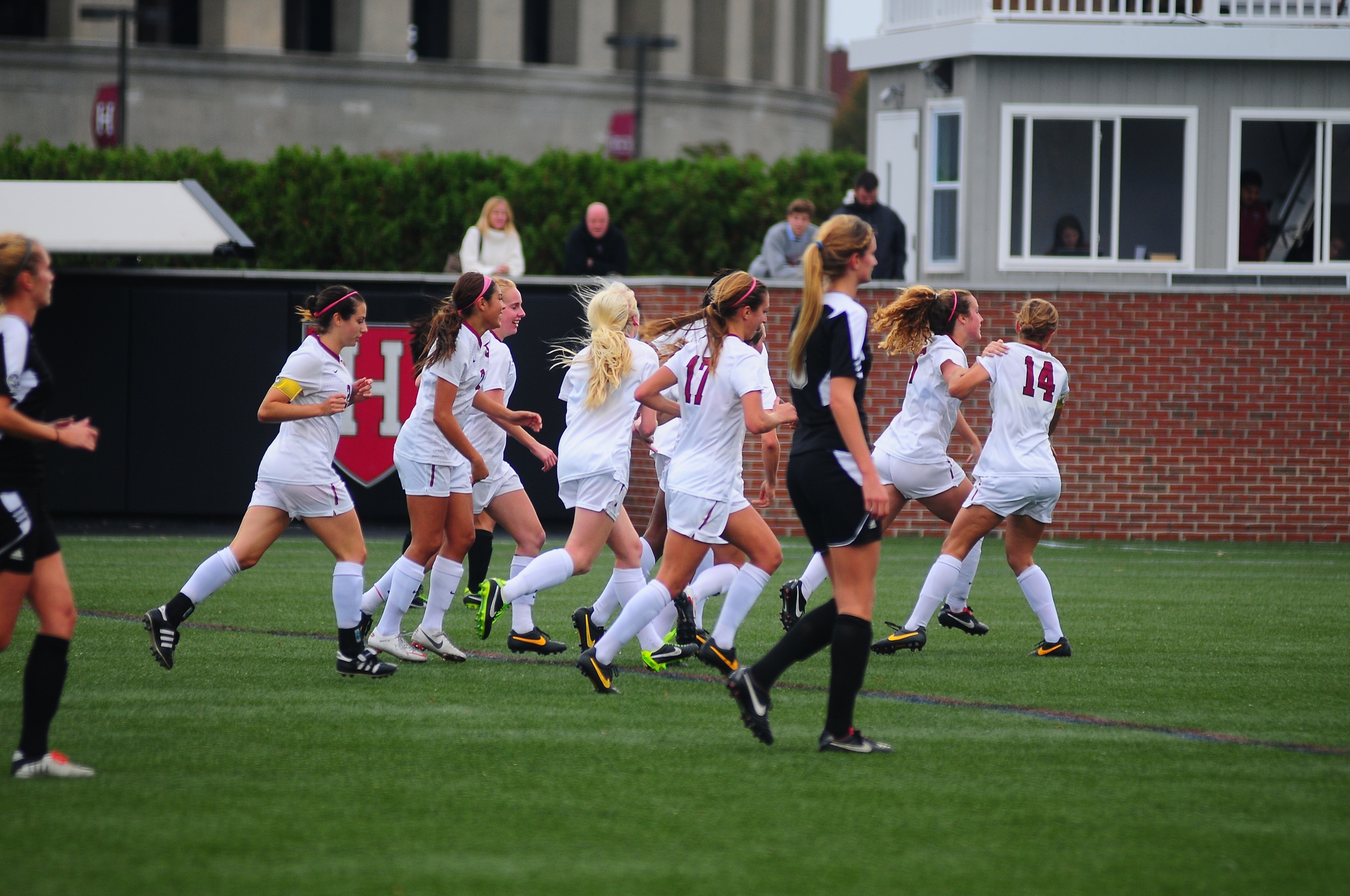 The women's soccer team took down CCSU, 6-0, in the first round of the NCAA Tournament.
By Phil Delamater, Crimson Staff Writer

The women’s soccer program headed to Hanover, N.H. last week in firm control of first place in the Ivy League, needing just a draw to clinch its second straight league title and the Crimson’s fifth in seven years.

Instead, the squad left with a tough 2-0 loss to Dartmouth that snapped the Crimson’s 13 game conference unbeaten streak and brought the Big Green within one point of Harvard in the conference standings.

With only its final regular season game remaining, the Crimson (9-4-2, 4-1-1 Ivy) will have to win the league the hard way. The team still controls its own destiny, as a victory against Columbia (7-3-6, 2-2-2) on Saturday would guarantee a first-place Ivy finish.

A draw or a loss, on the other hand, would leave Harvard’s fate in Dartmouth’s hands, bad news for the Crimson—the Big Green is riding a seven-game conference unbeaten streak of its own and faces off against cellar-dwelling Cornell to close its season.

The match-up with the Lions will be emotional and intense for Harvard, as the Crimson not only will be vying for a championship but will also honor its seven seniors prior to the last home game of their collegiate careers.

“I think it’s exciting that there’s something on the line for senior day,” co-captain Marie Margolius said. “That’s the way it usually is in the Ivy League...so this is what we were expecting all along.”

Despite coming off a loss, Harvard can take heart in its historical dominance over Columbia going into Saturday’s contest. The Crimson has a 24-3-1 record all-time against the Lions and has won the last six meetings between the two squads. Harvard also has not lost back-to-back conference games since 2007.

Although Harvard has dominated the Lions in recent years, Columbia has been extremely difficult to beat this season. The Lions have only three losses on the year, and all of them have come by just one goal. Much of this ability to stay in games can be attributed to the team’s stingy defense, which has allowed only 0.56 goals per game on an average of 8.6 shots per contest.

“We’ve gotta be sharper...sharper with [our] passes, sharper with [our] defending,” Harvard coach Ray Leone said. “[We] need to really focus on that part of the game—sharper possession—because that leads to good attacking opportunities.”

As a result, the Ivy League title likely rests on which version of the Crimson offense shows up on Saturday. Harvard has been feast or famine offensively all year, averaging nearly three goals per game in wins and scoring just once in its other six games combined. With an average of 13.8 shots per game, the Crimson can create scoring opportunities in bunches, but finishing those chances has been the difference between winning and losing for Harvard.

Sophomore forward Midge Purce has drawn most of the defensive attention throughout the season after scoring 11 goals during her rookie campaign. She leads the team again with six goals and has been the Crimson’s chief playmaker but is far from its only option.

Six other Harvard players have scored multiple goals this season, with junior forward Emily Mosbacher second on the team with four tallies. Co-captain Meg Casscells-Hamby has also been an integral creator for the Crimson, as she has dished out a team-leading four assists to go along with three goals.

“If you had to say at the beginning of the season, you’re gonna...have one final game to decide [the Ivy League title], anyone would take that shot.” Leone said. “So I’m excited for the opportunity.”