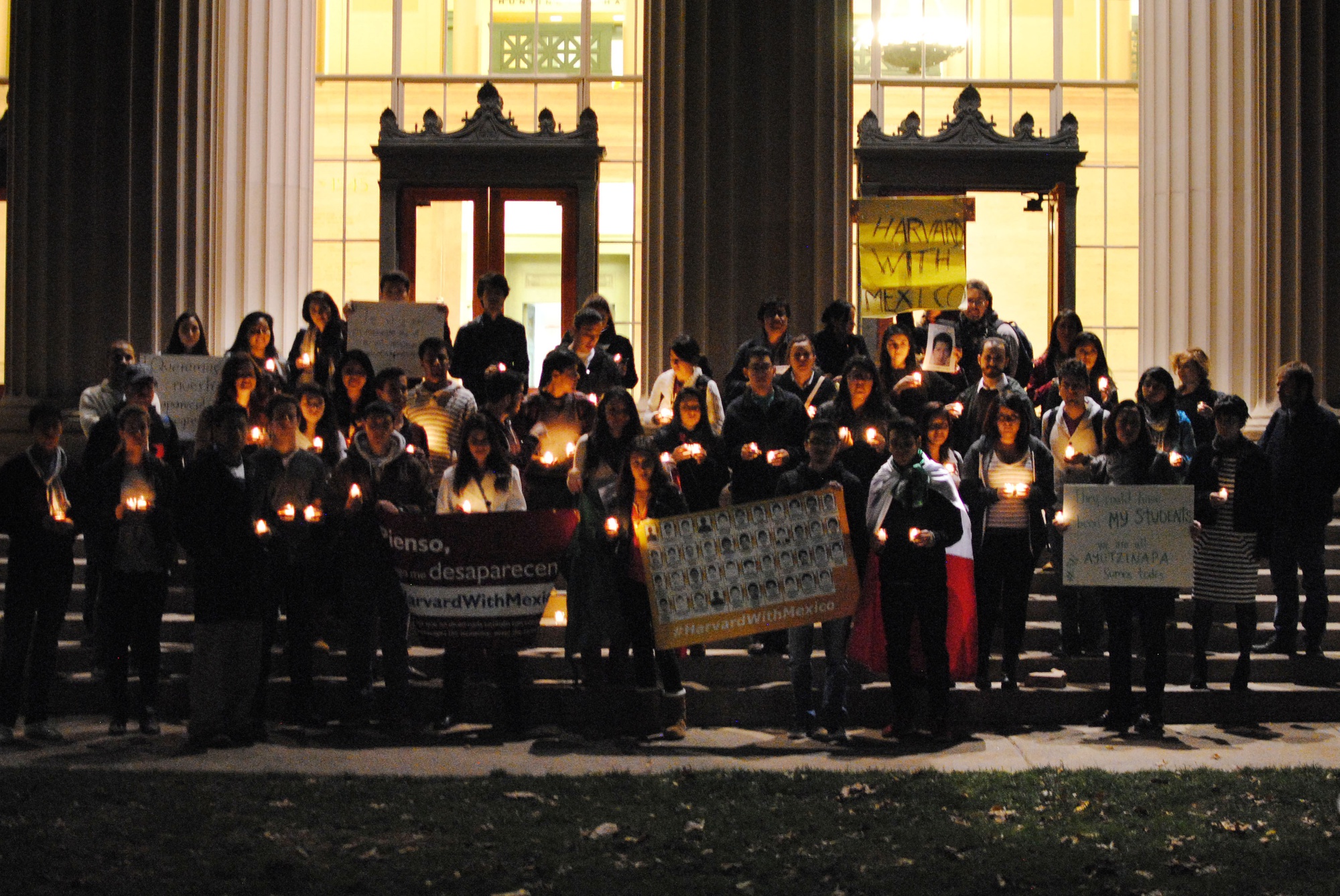 College students from schools throughout the greater Boston area gather in Killian Court at MIT Wednesday evening to peacefully protest against the kidnapping of 43 students, six of whom have been found dead, from the Ayotzinapa Normal School in Mexico. The group condemned the government's failure to address the situation. In solidarity, they lit 43 and walked from MIT to the Mexican Consulate.
By Brooke A. Bourgeois and Jessica Kim, Contributing Writers

By the light of 43 candles, students from the Boston area gathered after dusk on the steps of MIT’s Killian Court Wednesday to begin a march in protest of political injustice in Mexico.

According to the students, the demonstration was an opportunity to demand justice for 43 missing Mexican students from the Ayotzinapa Rural Normal School, kidnapped in Iguala, Mexico, this September. The Mexican students had been planning to organize a peaceful protest against unfair hiring and funding practices in the government when they were halted by the municipal police, believed to be following the mayor’s orders. There is still no word of the students' whereabouts.

“These are college students. These are kids our age,” said Ariana Campos ’16, vice president of RAZA, one of the major Latino clubs on Harvard’s Campus, referring to the missing 43. Although there was a recent march about the missing Ayotzinapa students held in New York City, Campos said, “I would like to see a stronger reaction from Harvard.” 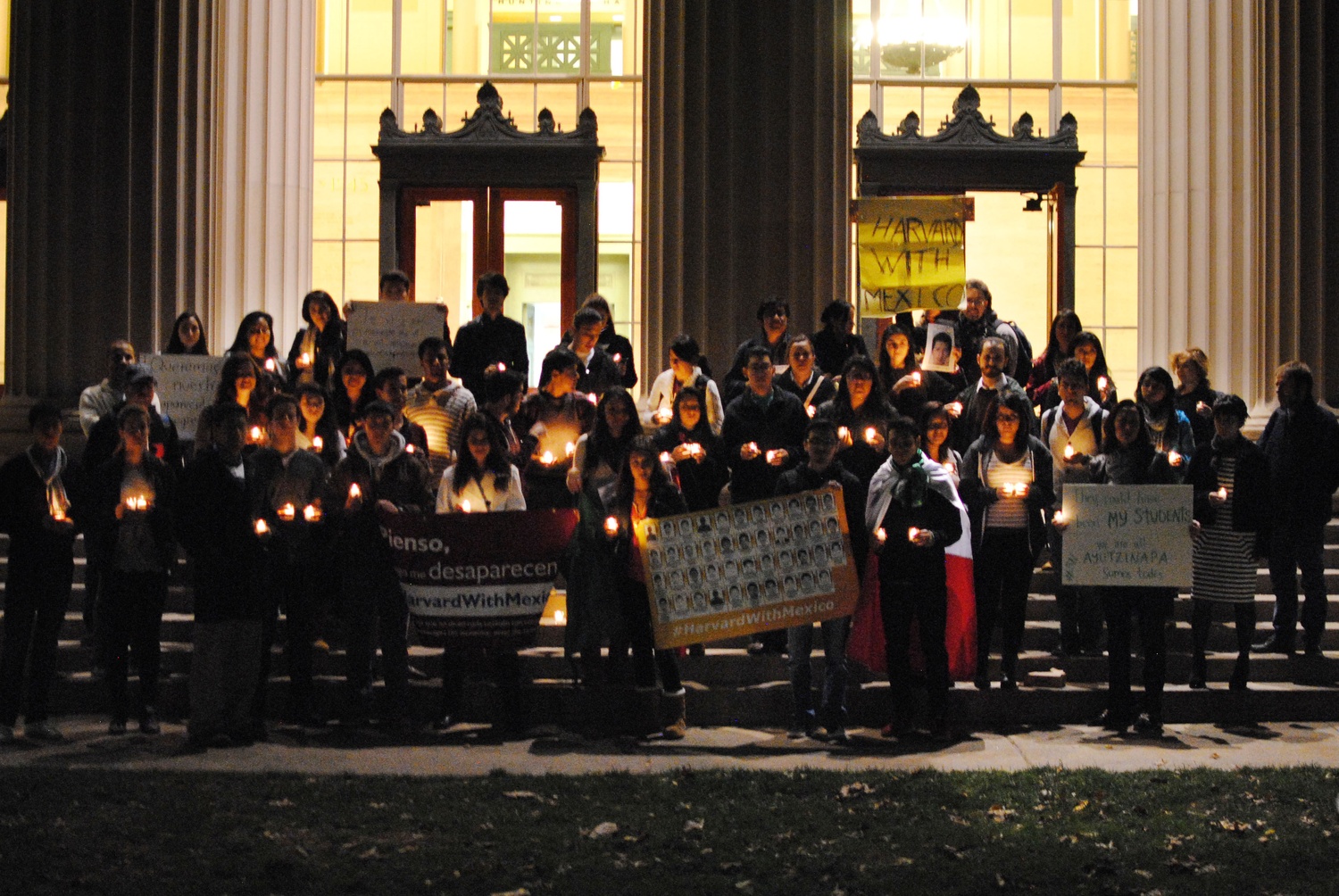 College students from schools throughout the greater Boston area gather in Killian Court at MIT Wednesday evening to peacefully protest against the kidnapping of 43 students, six of whom have been found dead, from the Ayotzinapa Normal School in Mexico. The group condemned the government's failure to address the situation. In solidarity, they lit 43 and walked from MIT to the Mexican Consulate. By Tiana A Abdulmassih

Nathan Goldberg ’18 said he was so outraged by what he called government-organized crime in his country that he was motivated to organize Wednesday’s march. The march started from MIT and ended at the Mexican Consulate in Boston, involving undergraduates and graduates from several colleges in Boston, including MIT, Harvard, and Tufts University.

Marleen Sanchez ’17 said that the march was “a sign to show that we are demanding some action, even here.” Goldberg echoed the same sentiment.

According to Goldberg, the day was designated by a student in Mexico to be a Global Day of Action, which led to university students in Mexico going on strike and protesting.

“We’re trying to do the same thing, show solidarity for the cause, and even if we can’t do much, this is the most we can do here,” Goldberg said.

He mentioned the importance of student activism in light of the kidnappings.

“In Mexico, we look at the news every morning, and see another kidnapping, another murder, another two people, three people, and we’ve almost become numb—it’s an everyday thing,” Goldberg said. “I think this [issue] is big enough that it’s kind of snapped us out of it. It’s not okay for even one person to be murdered or kidnapped.”

After two hours of walking, the group reached the Mexican Consulate, only to have the vast majority turned away by police. According to the Harvard students, officials at the consulate were willing to come out of the building in order to communicate with the group, but the police maintained that they did not have the manpower to control the crowd if something went awry and would not permit entry for the majority of students.

Two students from the protest were allowed entry into the consulate. The others involved stayed outside and, while still holding candles, held a two-minute moment of silence.