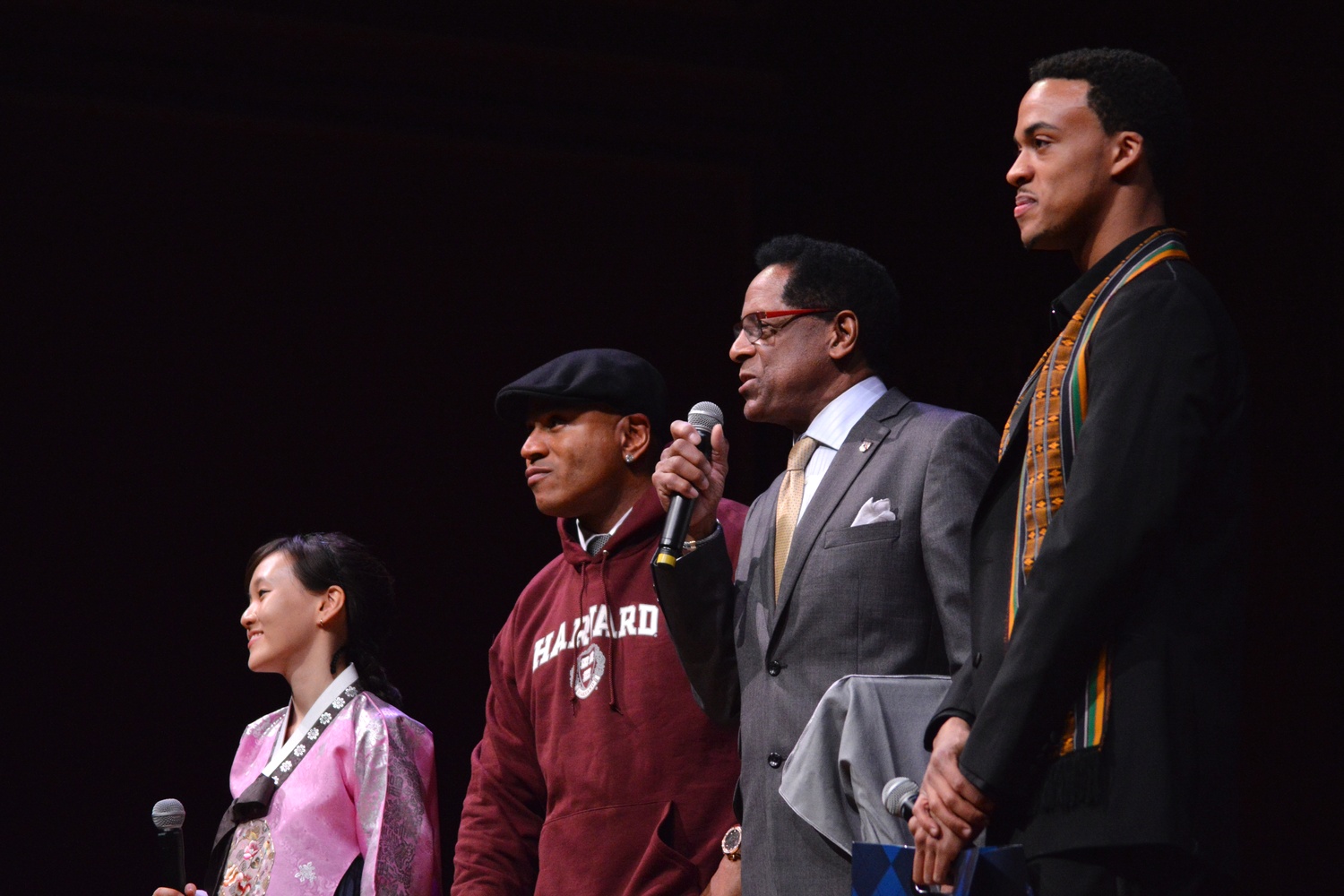 Donning his trademark hat and a velvet suit, LL Cool J said that receiving the Harvard Foundation’s Artist of the Year award at the 2014 Cultural Rhythms celebration should be a good omen for the rest of the year.

The Grammy Award-winning rapper, star of “NCIS: Los Angeles,” and champion of youth education was honored at Saturday’s festival by directors Aubrey J. Walker ’15 and Soyoung Kim ’14, as well as Neurology professor and Director of the Harvard Foundation S. Allen Counter, who was leading the ceremony for the 29th time.

“Each year we select, by student suggestion and vote and recommendation, a person to be honored as Artist of the Year, and this year, we’ve made a great choice,” Counter said.

LL Cool J took the stage amid cheers and applause from the packed audience in Sanders Theatre, gathered for a day-long celebration of diversity at Harvard. He told the crowd that he aimed to inspire students with lessons from his own journey. 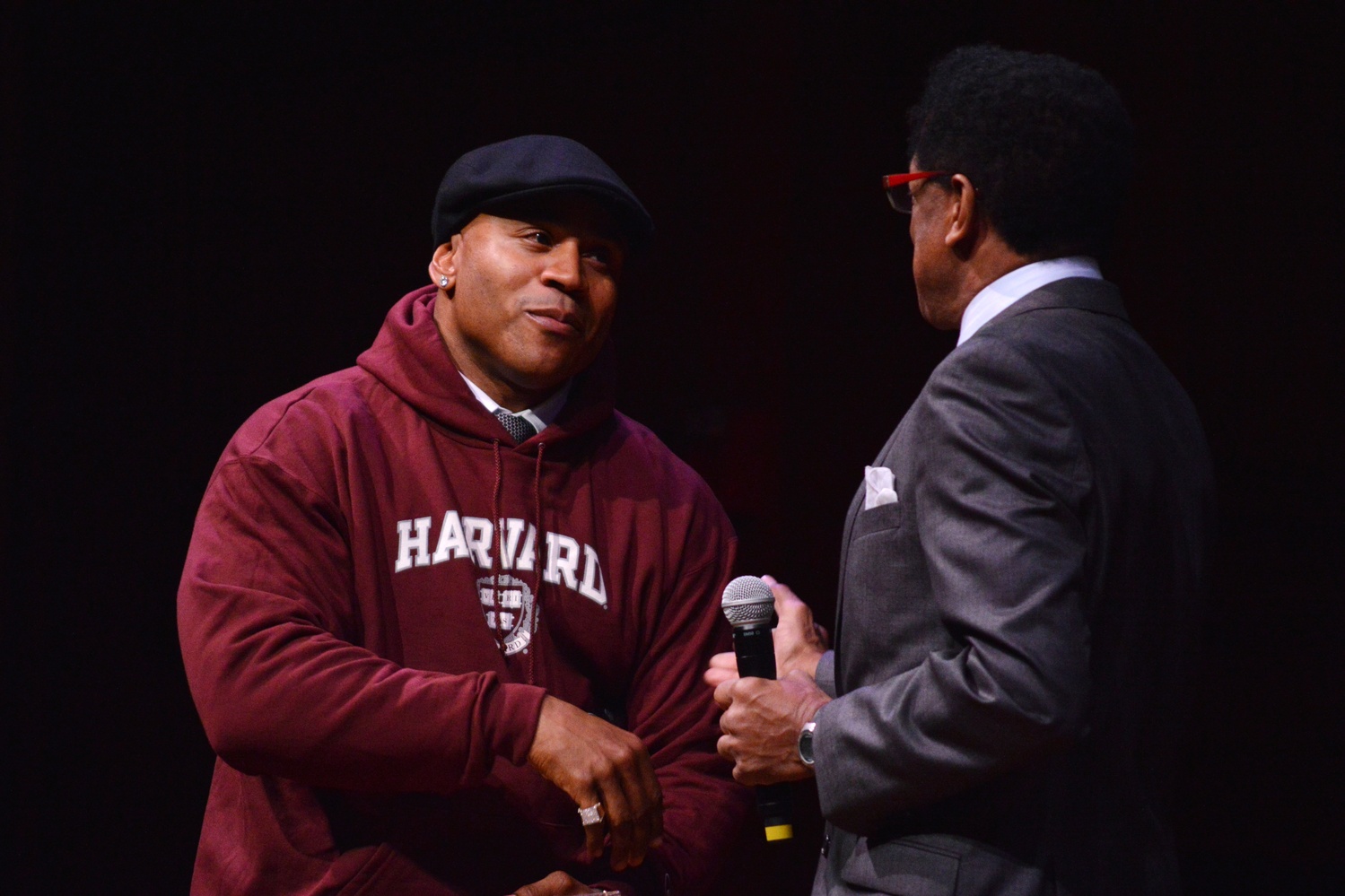 Harvard Foundation Director S. Allen Counter presents the Artist of the Year award to LL Cool J, who remained on stage as various cultural groups from the University performed during Cultural Rhythms. By Y. Kit Wu

“Me being here is representative of something truly magnificent about our country,” he said. “We have our disagreements, we have our problems...but ultimately, this is proof that if you have faith, if you work hard, if you believe, if you are determined, if you are adventurous, if you dedicate your life to being creative, if you truly have faith...you can become anything you want to become.”

He also stressed the importance of creativity, not only academically or artistically but also in creating “a great life.”

“You’re the architect of your fortune, so make sure the blueprint is right and build well,” he said.

LL Cool J emceed the afternoon’s festivities, and interviewed members of each ensemble after their performances, joking with students as he asked about their interests and the origins of each group—a role he likened to “the David Letterman of Harvard.”

During the show’s second act, LL Cool J donned a Harvard sweatshirt given to him by Walker and Kim. 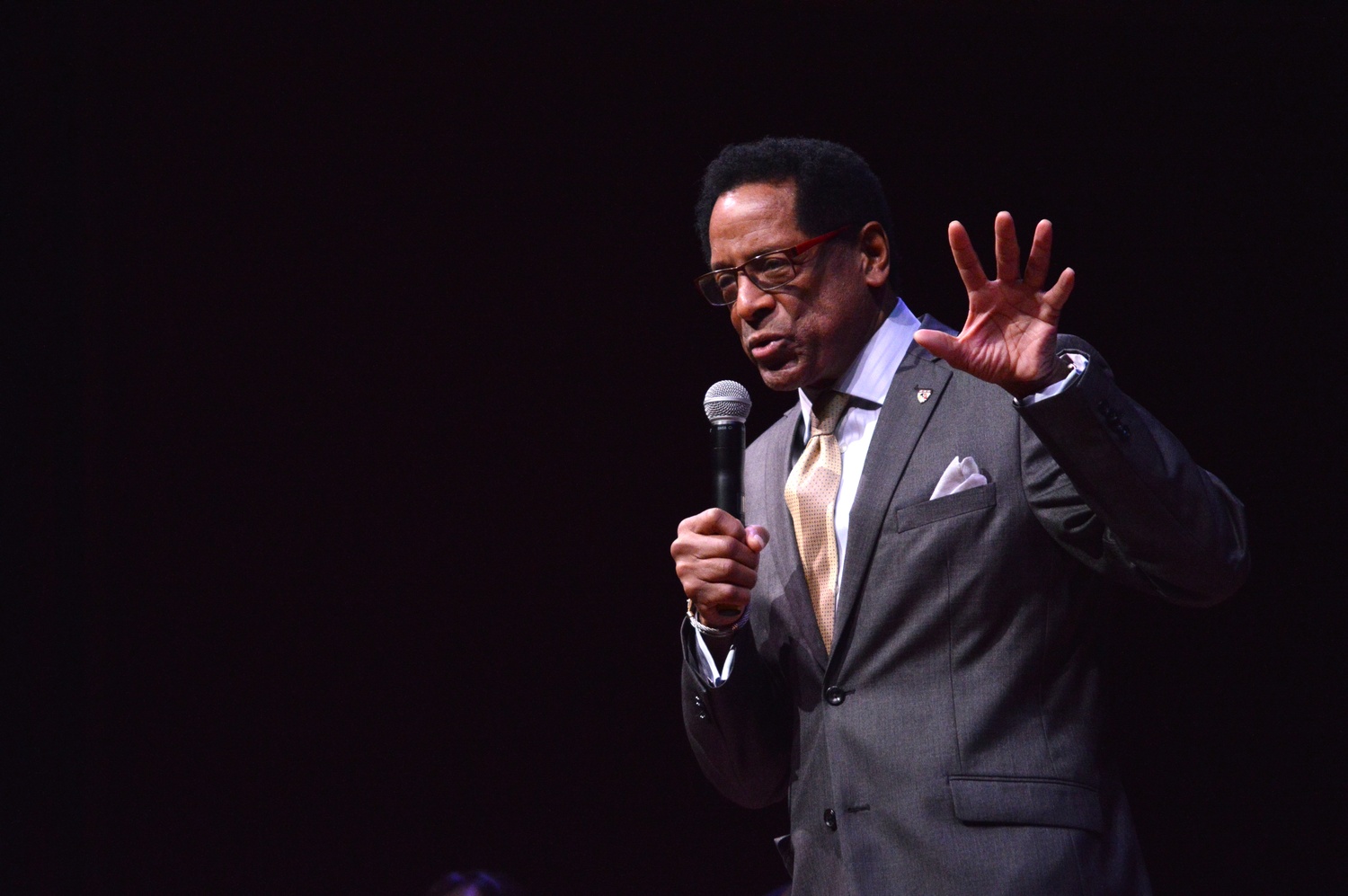 Harvard Foundation Director S. Allen Counter speaks to the crowd before the arrival of LL Cool J at the 2014 Cultural Rhythms event. By Y. Kit Wu

Amid the audience’s laughter, LL Cool J said, “I love the sweatshirt. I can’t wait to rock it in a video.”

Counter presented him with the Artist of the Year plaque and praised the honoree as “an outstanding role model and symbol of excellence” in his commitment to educating young people.

Earlier in the day, LL Cool J had been toasted at a lunch in Kirkland House and the subject of a roast by the Immediate Gratification Players. The annual Cultural Rhythms Food Festival in the Science Center followed the Sanders program and showcased a variety of ethnic cuisines.

At the press event after the show, LL Cool J remarked that he was unprepared for the level of enthusiasm and talent Harvard brought to the stage.

“I didn’t expect to come and be inspired,” he said. “I feel inspired.”

LL Cool J joins the likes of Will Smith, Halle Berry, Matt Damon, and Shakira to have received the honor.