“I, Too, Am Harvard” Draws National Attention, Promotes Discussion 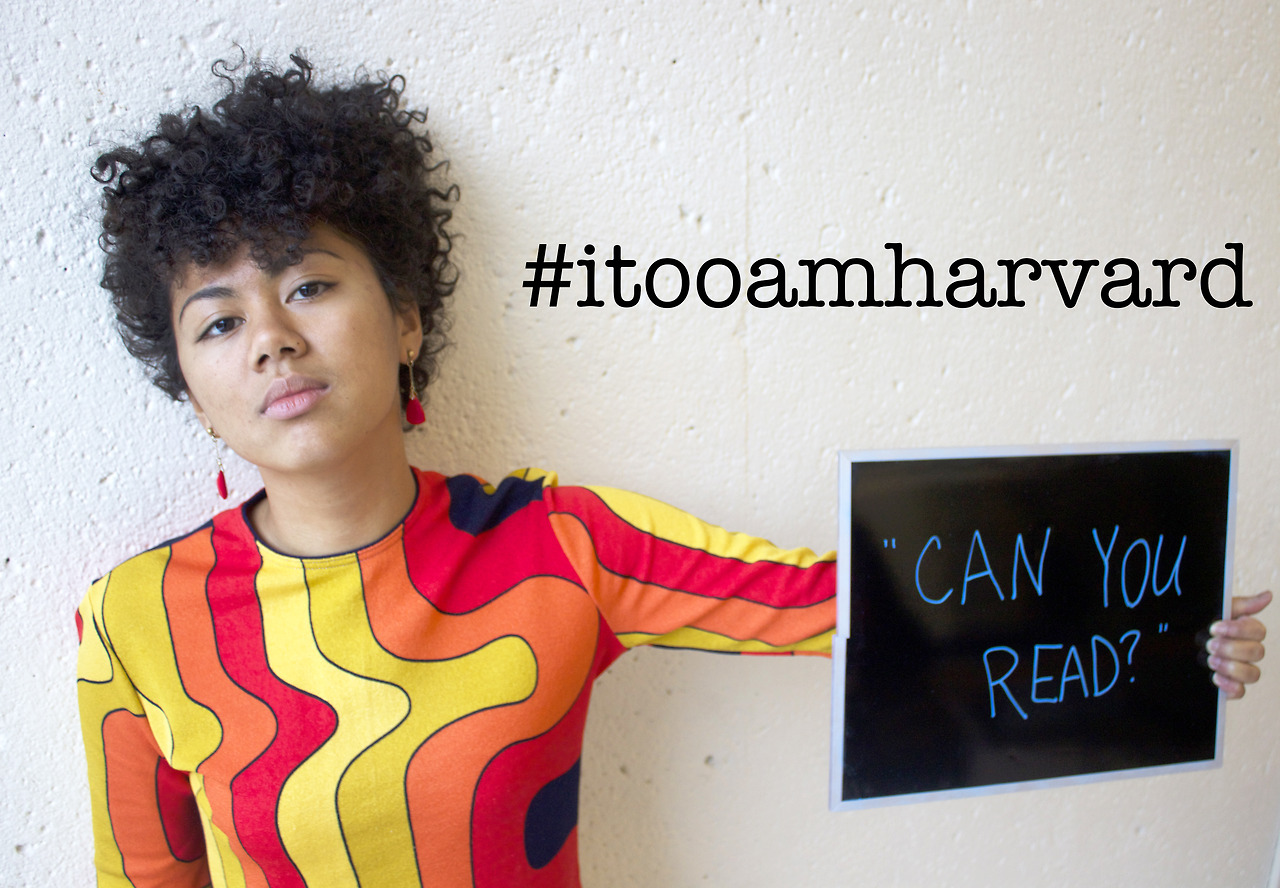 Kimiko Matsuda-Lawrence ‘16 created the I, Too, Am Harvard photo project in order to explore and expose the issues black students face on the Harvard campus.
By Meg P. Bernhard and Theodore R. Delwiche, Crimson Staff Writers

Kimiko Matsuda-Lawrence ‘16 created the I, Too, Am Harvard photo project in order to explore and expose the issues black students face on the Harvard campus. By Courtesy of Carol Powell

Launched last Friday, the Kuumba Singer’s multimedia campaign “I, Too, Am Harvard” has drawn hundreds of thousands of internet views from around the world in an effort to open a dialogue about racial inclusion at Harvard.

The project, which will be performed on-stage as the opening production of Kuumba’s sixteenth-annual Black Arts Festival, began last spring in the wake of discussions about affirmative action and evolved into an online collection of testimonies from black students about their varying experiences being a minority on campus.

“We’re starting to have a cross-cultural dialogue between different races, where black people are coming out and speaking about our campaign, for things we weren't able to talk about before,” said Kimiko M. Matsuda-Lawrence ’16, Kuumba’s recording secretary.

Last semester, Matsuda-Lawrence enrolled in an independent study course in order to conduct interviews with black students about identity, microaggression, and racism on Harvard’s campus. These interviews, about 40 in total, became the basis for the “I, Too, Am Harvard” play, which will be performed on Friday.

In addition to the original 40 interviews, Kuumba launched a multimedia campaign, which has been profiled by news outlets like BuzzFeed and the Huffington Post. The project features more than 60 black students voicing their concerns about marginalization and stereotypes in their lives.

Responding to these concerns, members of the Harvard community expressed eagerness to listen to the messages of “I, Too, Am Harvard.”

“I think there is always room for more dialogue, and if some people in their class don't feel that this is their Harvard, then I think that is really regrettable,” Dean of Freshmen Thomas A. Dingman ’67 said. “We need to open our ears and open our hearts and listen to what can contribute to our campus.”

Creators of “I, Too, Am Harvard” said they hope that the campaign provides a platform for ongoing discussions at the University.

Monica A. Ukah ’16, who was photographed for the campaign, said that “I, Too, Am Harvard” offered her an outlet to speak about her experience with racism and on campus.

“The campaign is a great venue to speak about things that aren’t normally spoken about here,” Ukah said. “Here, there isn’t much of a way to fight back.”

President of Kuumba Lauren E. Fields ’14 agreed that students do not spend enough time meaningfully reflecting on issues of diversity at Harvard.

“A lot of times when people talk about diversity on campus it seems to be just about the numbers...without actually engaging with that diversity actually means,” Fields said.

Kuumba members said that they hope the stories and concerns in “I, Too, Am Harvard” will outlive the performance on Friday, which sold out almost immediately after the box office opened Tuesday.

“We certainly will be continuing our discussions….We know this movement is too big to stop moving,” said Matthew S. Williams ’14, Vice President of Kuumba.

In addition to the multimedia campaign and the play, some Kuumba members hope to continue to hear feedback from the larger community and add that feedback into their conversations.

“We are hoping by the time the show is performed on Friday, and in the time following that we can get a clear idea of what people are saying on campus, how they feel, and how we can incorporate that into what we hope to bring on campus,” Kuumba member Abigail W.T.A. Mariam ’15 said.