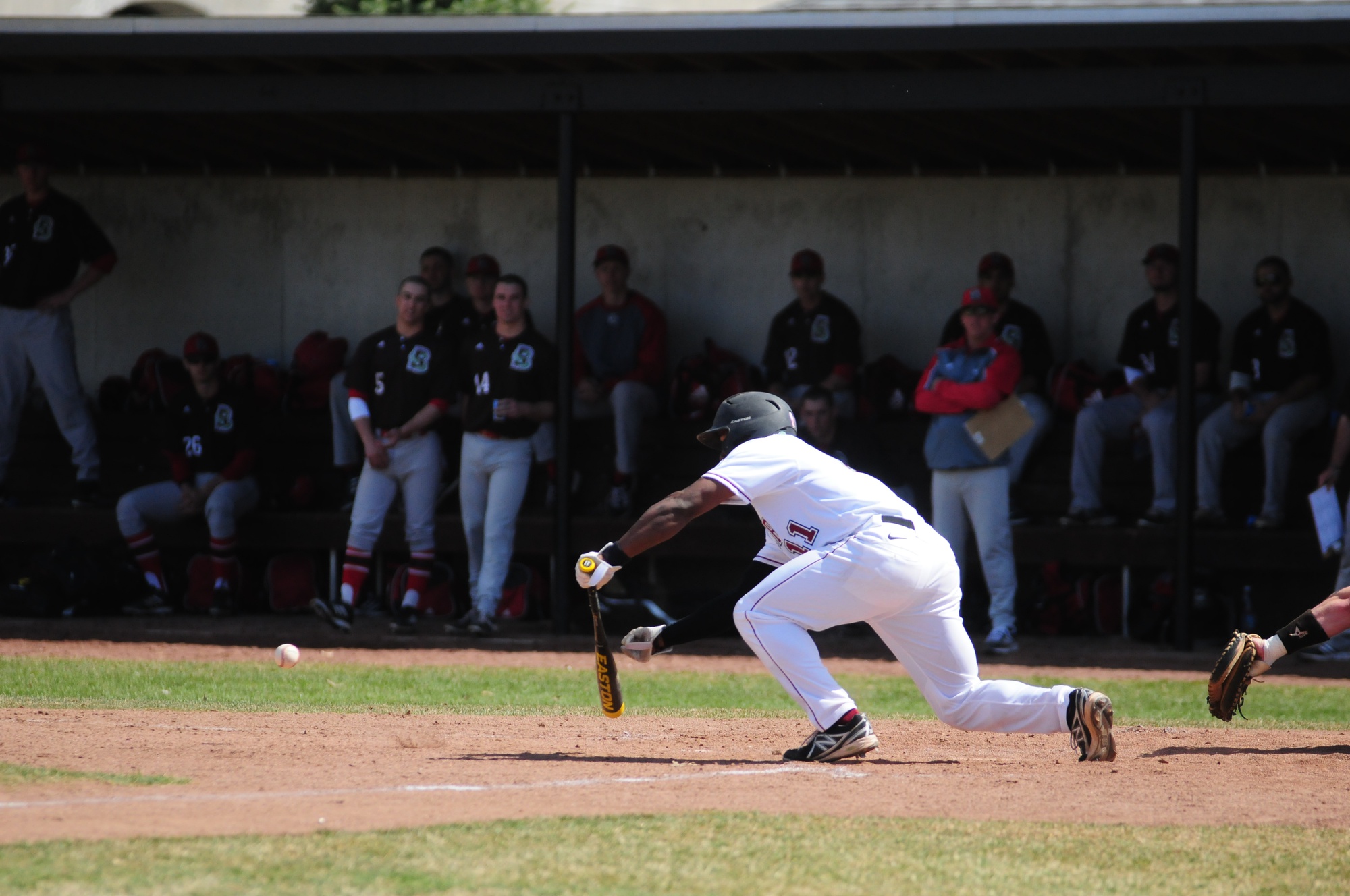 Co-captain utilityman Carlton Bailey, who leads the Crimson with a .317 batting average, added to his mark on Monday against UMass in the championship round of the Beanpot. Bailey went 2-for-3 to help Harvard celebrate Patriots Day with its third all-time Beanpot win, and first since 2005.
By Kelley Guinn McArtor, Crimson Staff Writer

After coming off of a rocky series against Yale, the Harvard baseball team (11-24, 5-11 Ivy) secured the Beanpot Championship against UMass (8-23, 6-9 Atlantic 10) for the first time in nine years.

The Crimson shut out the Minutemen at Northeastern’s Friedman Diamond on Monday afternoon, 3-0.

“It feels awesome to get a win after a tough weekend at Yale,” co-captain utilityman Carlton Bailey said. “I feel the win shows how we, as a team, can bounce back after playing 45 innings the past three days.”

The game was not a contest in which offense was strong, with Harvard and UMass only registering eight and five hits, respectively.  Despite recording a double and a triple amongs their five hits on the day, the Minutemen failed to send a player across home plate.

“I think our biggest strength today was solid defense,” freshman pitcher Greg Coman said. “I trusted the guys behind me to make all the plays, and that’s exactly what they did. In the fourth inning, Carlton Bailey made a great catch that led to an inning ending double play. That got the team pumped up and we scored a run in the bottom of that inning.”

Bailey helped reel in a couple double plays for the Crimson while playing second base. Notably, the senior played in the infield for teammate and senior second baseman Kyle Larrow.

Larrow, who holds a .296 batting average on the season, missed the contest to run in the Boston Marathon. Going 2-for-3 for the day, Bailey also contributed at the plate to help out the offense.

Sophomore infielder Mitch Klug also pegged a significant batting performance against UMass. Klug went 3-for-4 and registered a double, which sent freshman Matt Hink across home plate for a run after the ball bounced over the wall. The double put the team on the board, 1-0.

The sophomore also scored the team’s third run off of a wild pitch at the bottom of the sixth inning. Junior outfielder Mike Martin and Hink both stole bases to send Harvard around the bags.

“I think Mitch Klug, T.J. Laurisch and Carlton bailey all had big games for us today,” Coman said. “Klug was seeing the ball really well…TJ came in relief for me and threw 4 scoreless innings.”

Coman (1-1) was attributed the win on the mound in his first start for the Crimson, pitching the opening five innings and allowing only two Minuteman hits. The freshman also secured four strikeouts.

Beginning in the sixth inning, sophomore pitcher T.J. Laurisch relieved Coman and was credited with the save. Laurisch tossed the final four innings and was effective, sending four UMass players down swinging.

Coman stepped up and carried Harvard in a game with major implications, and was able to keep calm despite it being his first start, according to him.

“I acted like it was just any other game, which is why I think I pitched well,” Coman said. “I just focused on hitting my spots and getting outs. It’s a great feeling to get a win, especially since it was the Beanpot. Holding that trophy after the game was definitely a sweet feeling.”

Bailey also credited the pitching and defense for doing its job and allowing the offense to do its part to win the game.

“Our pitching was outstanding along with solid defense for nine full innings,” Bailey said. “Our consistency through the game gave us the chance to take the win.”

Neither team committed any errors throughout the contest, as both teams were able to turn double plays.

The relatively clean fielding, along with the strong pitching from the Crimson, ensured that it was a low-scoring contest.

“I really didn’t think we had any weaknesses today,” Coman said. “Our situational hitting could’ve been better, but you could say that for every game. A few times we left guys on base without scoring, but when it mattered most we got the clutch hits we needed.”

But while Harvard missed opportunities, leaving ten players on base overall, sending three men across home plate was enough for the Crimson to seal the win and claim the Beanpot Championship.