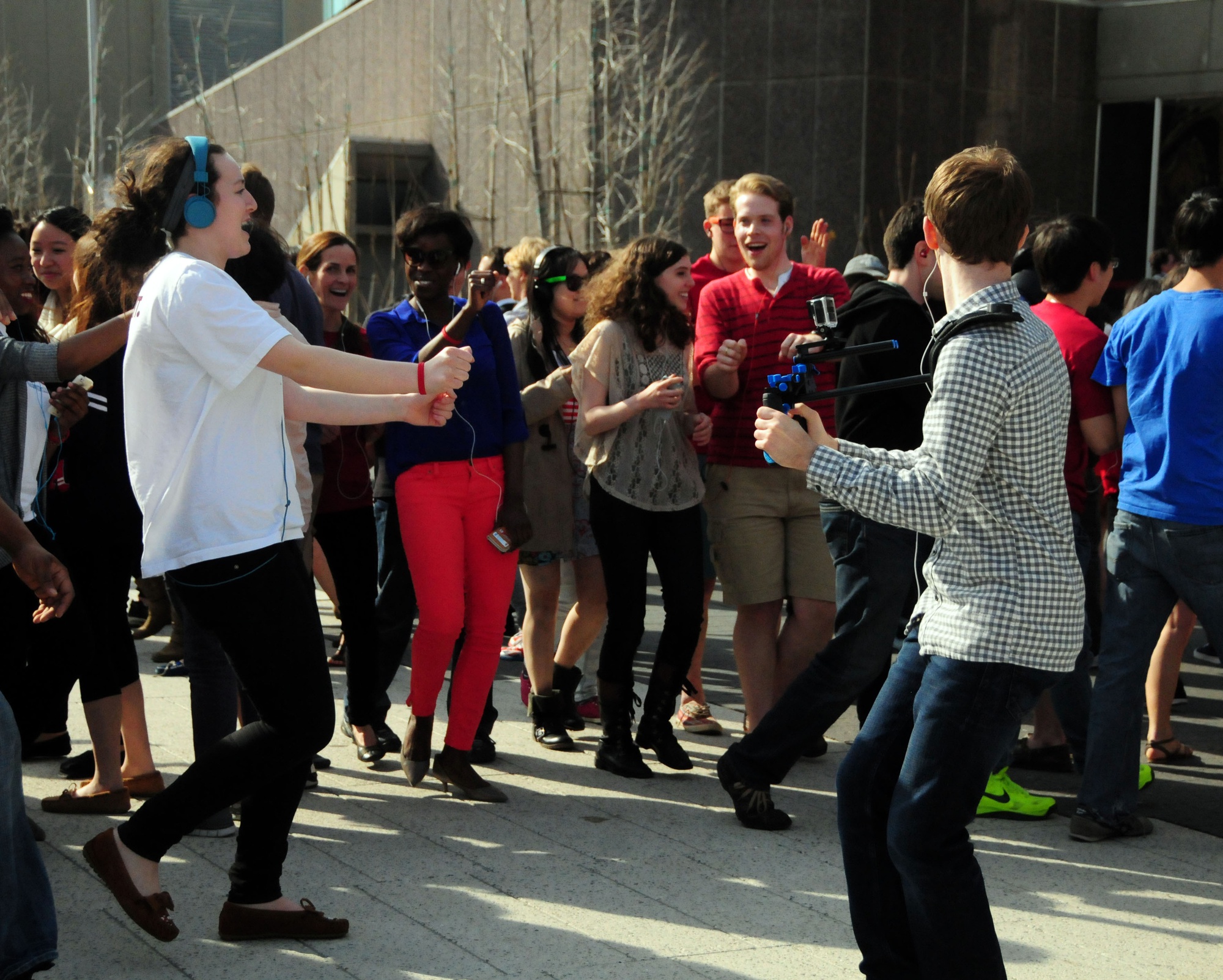 Occupancy at the Science Center Plaza swelled above its usual levels last Friday afternoon when curiously large crowds milled about the tables, benches, and food trucks, poised to take part in a synchronized flash mob to raise awareness of the need to eradicate malaria.

At 4:10 p.m., the sound of a single voice pierced the air through a megaphone—“Ready, set, go!” At this signal, 200 students sprang to their feet and popped in their earphones. Over the next half hour, they fist-pumped, swordfought, and formed a massive human “M,” drawing the attention of passersby.

The flash mob was part of an international campaign to publicize Global Malaria Day. Dyann F. Wirth, director of the Harvard Malaria Initiative and the chair of the Department of Immunology and Infectious Diseases at the Harvard School of Public Health, and the chief of staff for Ray Chambers, the United Nations Special Envoy for Malaria, were present. A total of nearly 350 students participated in similar mobs in Beijing and Harare, Zimbabwe. 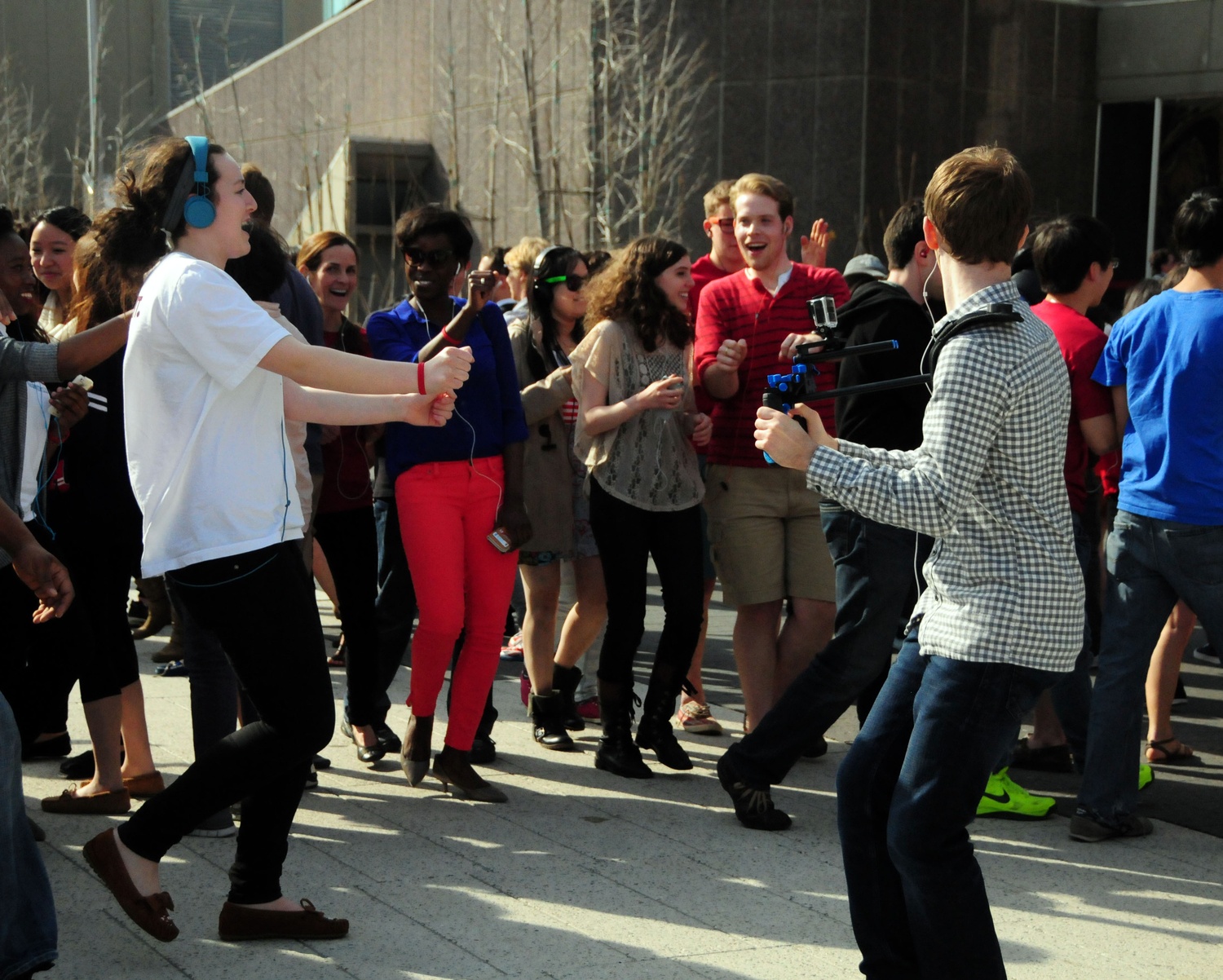 A winning proposal of the Harvard Malaria Competition, Mob Malaria was funded by Chambers, Harvard’s Defeating Malaria initiative, and an organization called Malaria No More.

Mob Malaria co-founders Stephen A. Turban ’17 and Lily H. Zhang ’17 said they wanted to diverge from the sentimental approach of traditional global health campaigns for their malaria awareness project.

“Global health campaigns kind of just miss our generation, because I don’t think they really get at the core of what our culture is,” Turban said. “A lot of them are tragic—drawing on pain to get support and sympathy—but the culture is really about things people can get excited about.”

After meeting several times and considering ideas that ranged from Model United Nations-style conferences to zombie video games, Turban and Zhang decided upon what they called a more “shareable” project—a flash mob.

Various Harvard comedy groups helped Turban and Zhang bring their vision into fruition. Satire V publicized the campaign via social media, while On Harvard Time filmed the event and wrote the script for the audio file that guided the mob.

As they finalized their project, Turban and Zhang said they also decided to scale their efforts up to the international stage.

“Then we realized that the whole point was to involve students. So we ended up connecting with them directly,” Zhang said.

Ultimately, in Zimbabwe, two directors and 30 volunteers enlisted local doctors to speak about malaria, tailoring the event to malaria prevention and other concerns of the local population, Zhang said.

Meanwhile, the director of the mob in Beijing designed a separate T-shirt and other promotional items for the event, which was aired on CCTV. Another group, in Changsha, China, also participated.

Turban and Zhang said they were pleased that their foreign counterparts took the campaign and “made it their own.”

Footage of all three mobs will be compiled into a YouTube video that Turban said will be available for viewing within the next week and a half.

“The success of Mob Malaria would support the idea that ‘fun’ is a great way to approach global health,” Zhang said.

Participants in Mob Malaria said they believed the energy of the mob was contagious and that the event united the community.

Blessing Jee ’17, who took part in the mob, said her experience was “educational” and empowering.”

“They did a great job integrating facts, history, and the sobering impact of malaria on the world with fun. I learned so much about malaria I didn’t know before,” she said.