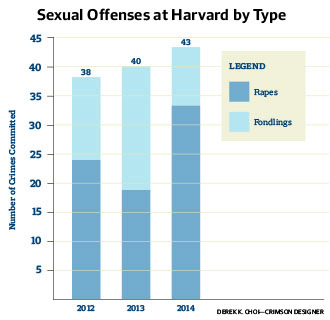 The number of reported rapes on Harvard’s Cambridge campus nearly doubled from 2013 to 2014, according to the Harvard University Police Department's annual security report released Thursday.

Of the 33 reported rapes in 2014, six were classified as “unfounded,” which the report defines as “any report of a crime that is found to be false or baseless” after an investigation by law enforcement. There was one reported rape reported on the Longwood campus.

HUPD Chief Francis D. “Bud” Riley wrote in the report that while crime may be low, Harvard students, faculty, and staff should remain vigilant.

“It is important for students, faculty, staff, and visitors to remember that we are located in an urban setting and must contend with many of the crime and safety issues that exist in any city,” Riley wrote.

The report indicated that the number of disciplinary actions taken for drug infractions in 2014 more than tripled since 2013; the number increased from seven to 22. There were 48 campus liquor law violations in 2014, down from 52 in 2013.

The sexual offense figures are released as the topic of sexual assault and harassment comes to the forefront of campus dialogue. Late last month, Harvard released what University President Drew G. Faust said were “deeply troubling” results of a campus-wide sexual assault climate survey. In particular, the survey found that 31 percent of surveyed senior women at Harvard College reported being victims of some kind of sexual misconduct—what the survey termed “non-consensual sexual contact.”

That survey also revealed students’ lack of confidence in and knowledge of Harvard’s reporting system for cases of sexual harassment and assault. Eighty percent of female College students who reported having experienced nonconsensual penetration by incapacitation, and 69 percent of those who experienced penetration by force, did not file a formal report, according to a report on the survey by former provost Steven E. Hyman.