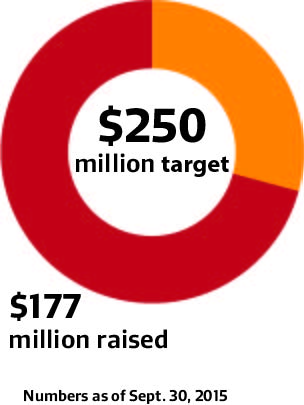 The Graduate School of Education has raised $177 million toward its capital campaign as of Sept. 30, making fiscal year 2015 its most successful fundraising year ever with a record $50 million in donations.

The amount represents significant progress from the $145 million total reported this April.

According to Daphne Layton, the Ed School's senior associate dean for development and alumni relations, the all-time fundraising record comprises of more than 11,200 unique gifts and pledges. The Ed School has achieved nearly 71 percent of its targeted goal of $250 million, a figure Layton said she considered notable since the Ed School’s individual campaign only publicly launched a year ago.

“We feel a tremendous sense of momentum,” Layton said. “We’re very excited with the progress we’ve made so far.”

The Ed School campaign has sparked the inception and development of several up-and-coming initiatives, namely the Harvard Teacher Fellows that underwent more than 10 years of planning and design before recruiting applicants this fall. According to Layton, the program has continued to receive strong support from donors—in addition to two anonymous gifts from last November and financial support from University President Drew G. Faust—and now amounts to $15 million in designated funds.

The Urban Scholars Program, another “seed program” gathering momentum from fundraising, will receive an ongoing pledge from donor David B. Ottaway ’62 to match any new gift to the program up to $500,000, Layton wrote in an emailed statement. The program offers fully-funded tuition to Ed School master’s students who demonstrate a “strong commitment to the betterment of urban education.”

While the scholarship is highly sought by Ed School master’s degree applicants, routinely receiving 300 to 400 applications, the program can only award 12 to 14 scholarships a year at the moment, Layton wrote.

“We would very much like to expand this program, which has helped us attract and enroll some exceptional students from across our master’s programs, who have gone on to lead or establish schools, work as teacher leaders, or take roles in district offices or nonprofit organizations serving urban populations,” Layton wrote.

Other “seed” initiatives gathering specific support include an online professional development program, which combines the efforts of both Ed School and Business School affiliates to train educators outside of Harvard, as well as the Education Redesign Lab led by Ed School professor Paul Reville, Layton said.

“Unrestricted” donations are contributed to the Ed School’s highest internal priorities: a targeted $75 million for financial aid, followed by a targeted $25 million towards funding faculty chairs, according to Layton.

“Those are both critical areas for us,” Layton said, “The way we view the campaign is that ultimately... even if we overshoot our global target, this campaign really won’t be successful unless we have made some pretty great strides in raising more money for those two buckets, because the future of the school depends on them.”

Aligning with Faust’s sentiment in September that the University does not plan to raise its overall capital campaign goal of $6.5 billion, despite $6.1 billion already raised, the Ed School will likewise shift focus to specific areas with fewer funds raised, rather than increase the target, Layton said.

Likewise, at the forefront of the University’s campaign, the Faculty of Arts and Sciences has raised $2.2 billion towards its $2.5 billion goal but is also refocusing on priorities that have garnered less support from donors. Meanwhile, Harvard Law School publicly launched its capital campaign last weekend with $241 million already raised toward its $305 million goal. Harvard Medical School has raised $467 million toward its $750 million goal one year into its own public phase of the campaign.