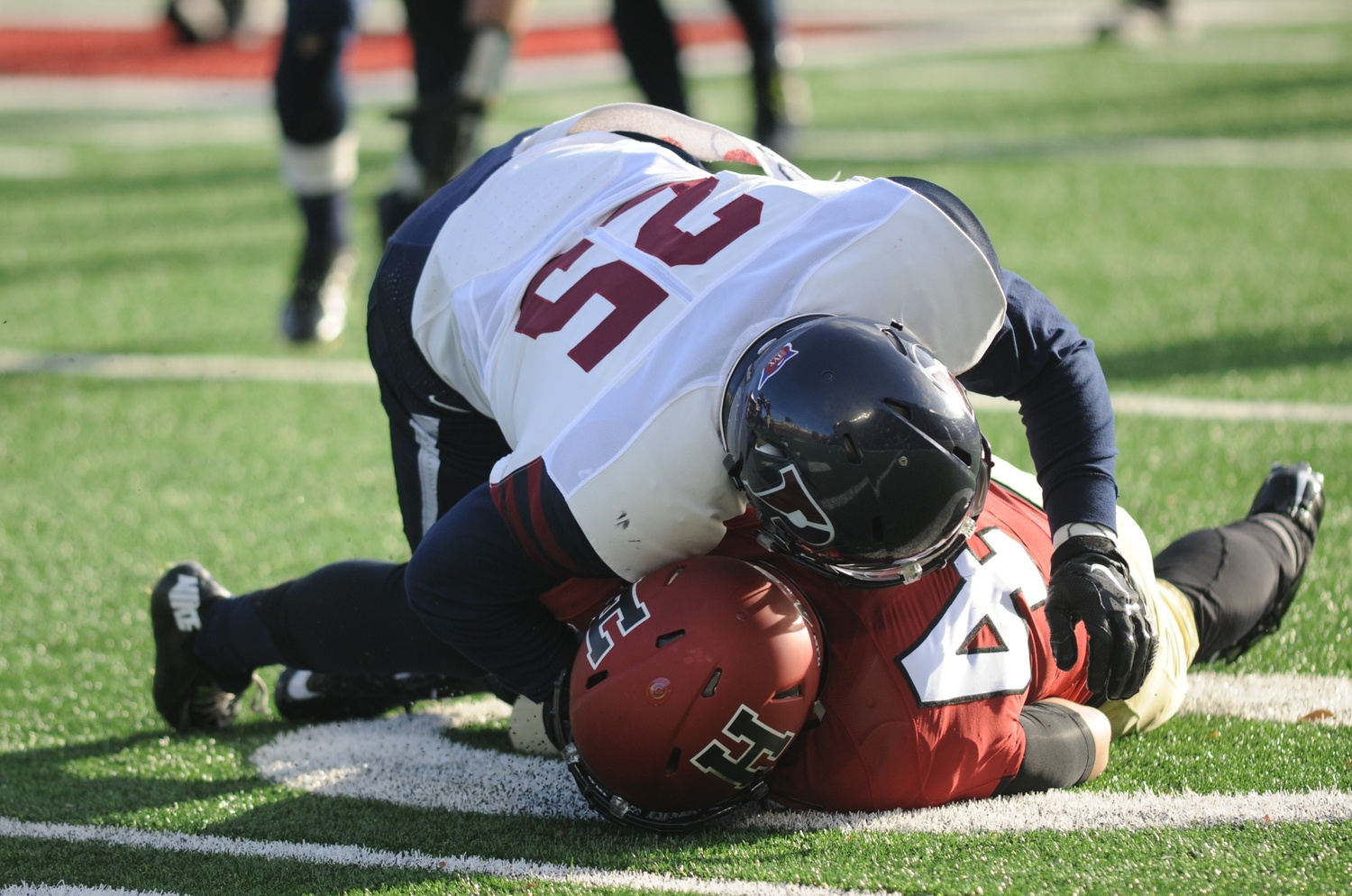 Outscoring Harvard by two touchdowns in the second half, Penn became the first team to beat the Crimson since 2013 on Saturday. By Matthew W DeShaw
By Samantha Lin, Crimson Staff Writer

It was 2012 when the Harvard and Penn football teams last met with an Ivy League title on the line for both sides. When the game ended, it was the Quakers celebrating the championship on Franklin Field.

The location was different on Saturday, and the Ivy title remained up for grabs when the clock expired. But it was still the navy and white jerseys rejoicing at the game’s end.

A number of costly Harvard (8-1, 5-1 Ivy) missteps and a big day from Penn quarterback Alek Torgersen allowed the Quakers (6-3, 5-1) to do what no other opponent has done against Harvard over the last 22 weeks of play—win. 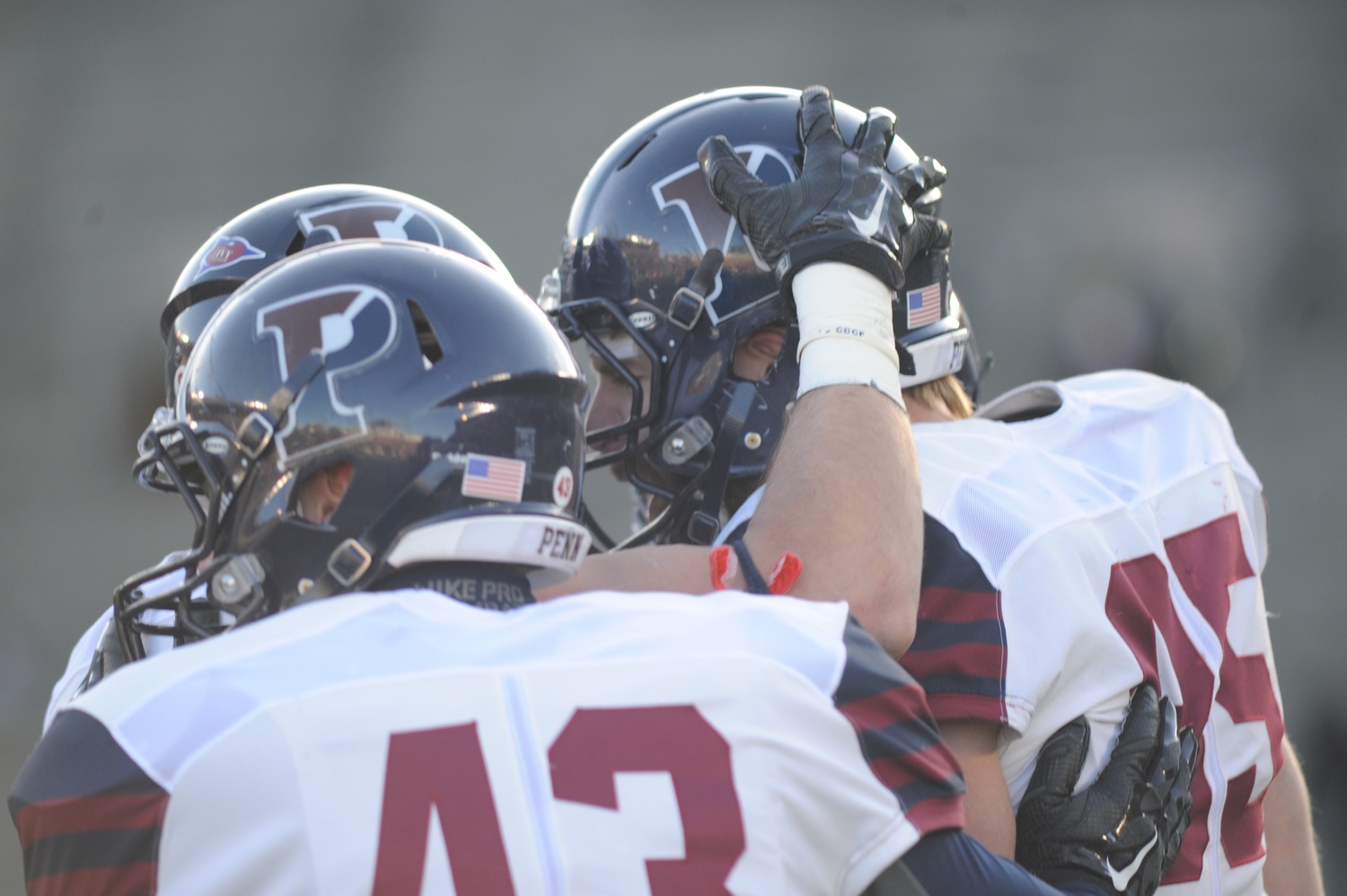 With its win on Saturday, Penn moves into a tie atop the Ivy League with Harvard and Dartmouth. By Matthew W DeShaw

“Penn’s an outstanding team. They did a great job and they deserved to win,” Crimson coach Tim Murphy said. “The bottom line is we made too many mistakes.”

The 35-25 loss at Harvard Stadium marks the Crimson’s first defeat since Oct. 26, 2013, and creates a three-way tie at the top of the Ivy League between Dartmouth, Harvard, and Penn entering the final week of the 2015 season. A win on Saturday would have clinched a share of the conference title for the Crimson.

Trailing by 10 points with less than four minutes remaining, Harvard found itself driving downfield in an attempt to claw its way back in the game. But a bruising tackle on sophomore running back Semar Smith caused the ball to pop out at the Penn 18-yard line, effectively ending the Crimson’s hopes for a comeback.

The turnover was the latest in a series of miscues by Harvard, which included a blocked field goal, a pair of failed two-point conversions, a missed extra point, and a second-quarter fumble by senior running back Paul Stanton at Penn’s 11-yard line.

“In the end, they just made a few more plays,” Murphy said. “Specifically, in a tough game like that you have to come out on the good side of the turnover margin…. It’s just very difficult to beat a really, really good team doing those things.”

“Our guys upfront do a great job with pass rush,” Penn linebacker Donald Panciello said. “I think once [senior quarterback Scott Hosch] scrambled and felt the pressure, he didn’t want a part of it.”

Hosch suffered his first loss as starting quarterback as the Crimson failed to register points in the second half for the first time all season. Hosch totaled 246 passing yards and two touchdowns. 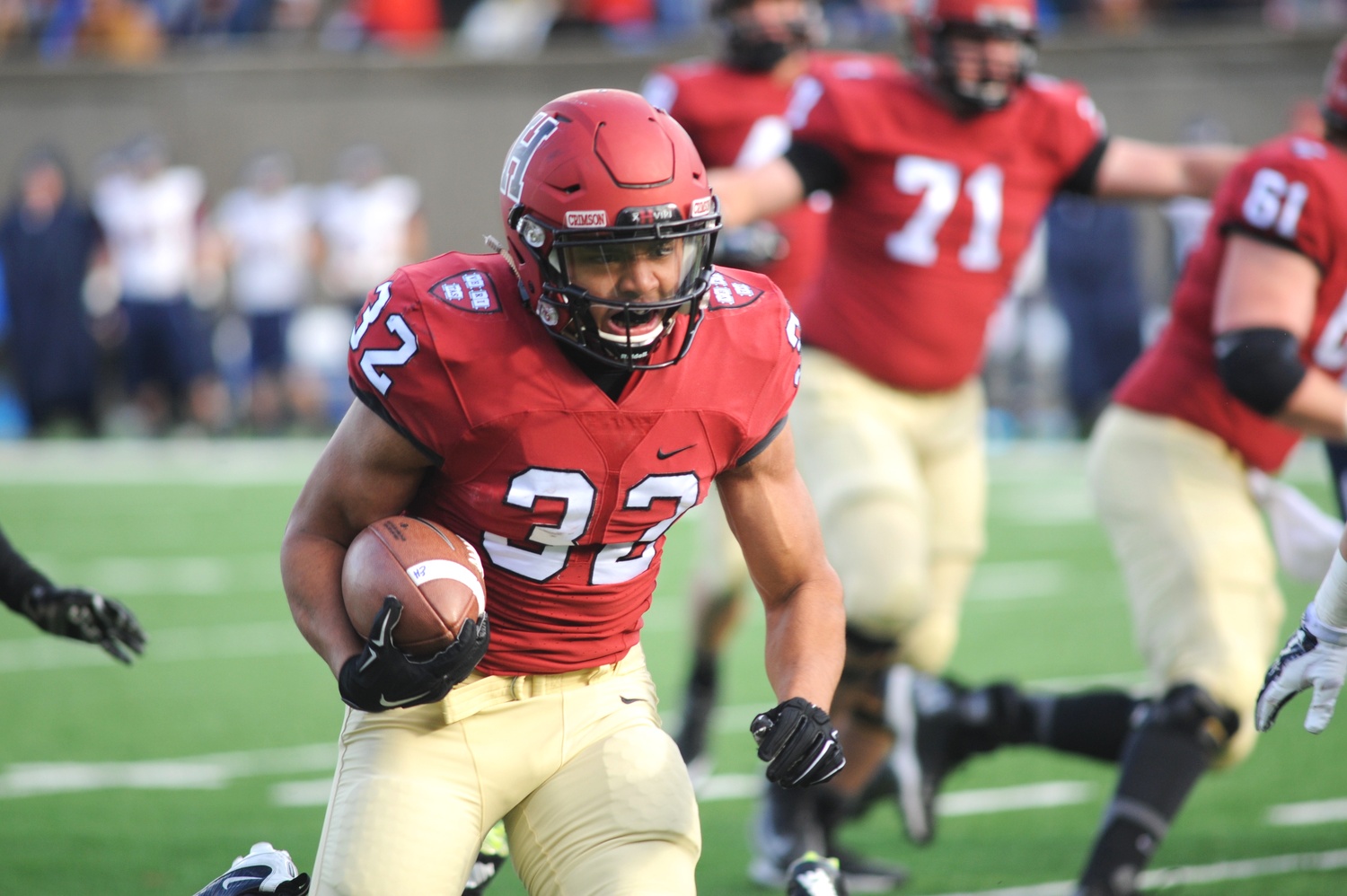 Sophomore running back Semar Smith punched in a 15-yard touchdown run in the first half, one of the Crimson's four first-half scores. By Matthew W DeShaw

The Crimson scored 19 unanswered points in the second quarter to take a 25-21 lead heading into halftime, but the advantage was short-lived. Penn’s Lonnie Tuff returned the opening kickoff of the third quarter all the way to the Harvard 39-yard line. Four plays later, Torgersen hit a wide-open tight end Ryan Kelly with a 28-yard strike for the go-ahead touchdown.

Three drives later, the Crimson faced a fourth-and-one at the Penn 10-yard line. Murphy elected to attempt a 27-yard field goal to tie the game, but the kick was blocked. On Penn’s ensuing possession, a 79-yard end-around dash by receiver Justin Watson gave the visitors a 35-25 advantage early in the fourth quarter.

“It was really just a standard outside run…but that was the best I’ve ever seen it blocked,” Watson said. “I’ve never seen a hole that big, and those guys opened it up.”

Torgersen ended the day with 245 yards and two touchdowns through the air, as well as two more on the ground. Watson registered 249 all-purpose yards and a pair of touchdowns.

A week after struggling to stop Columbia’s up-tempo offense late in the game, the Harvard defense seemed caught off guard by Penn’s early no-huddle strategy. While the Crimson offense stalled in the first quarter, Torgersen picked apart the secondary with three passes over 25 yards, including a 68-yard strike to Watson. Penn scored on its opening three possessions of the game.

Costly penalties against the Crimson—including an unnecessary roughness on the first Quakers drive and pass interference on the second—allowed Penn to open up a 15-point lead heading into the second quarter. An 81-yard kickoff return by freshman wide receiver Justice Shelton-Mosley set up a quick touchdown to put the Crimson on the board, though the missed extra point kept the deficit at 21-6.

The momentum shifted to the Crimson in the second quarter, when it became Harvard’s turn to open a scoring barrage, and the Quakers’ to stall on offense.

The Crimson defense held Penn to three consecutive three-and-outs while the offense put together a pair of scoring drives, each under two minutes, to close the gap to 21-19. The Quakers failed to move the chains again on their ensuing possession, and senior defensive back Sean Ahern blocked the punt to give Harvard possession at Penn’s 28-yard line.

Just eight seconds later, Shelton-Mosley took the reverse handoff from Stanton and lobbed a perfectly placed 28-yard ball to junior tight end Anthony Firkser in the end zone. The two-point conversion pass from Hosch sailed out of the end zone, but the score nevertheless gave Harvard its first and only lead of the game.

Senior tight end Ben Braunecker led Harvard with 134 receiving yards, and Shelton-Mosley totaled 186 all-purpose yards. But their efforts were not enough on Saturday, and Harvard will have to wait until next week for a second chance to clinch its third straight Ivy title in as many years.

—Staff writer Samantha Lin can be reached at samantha.lin@thecrimson.com.