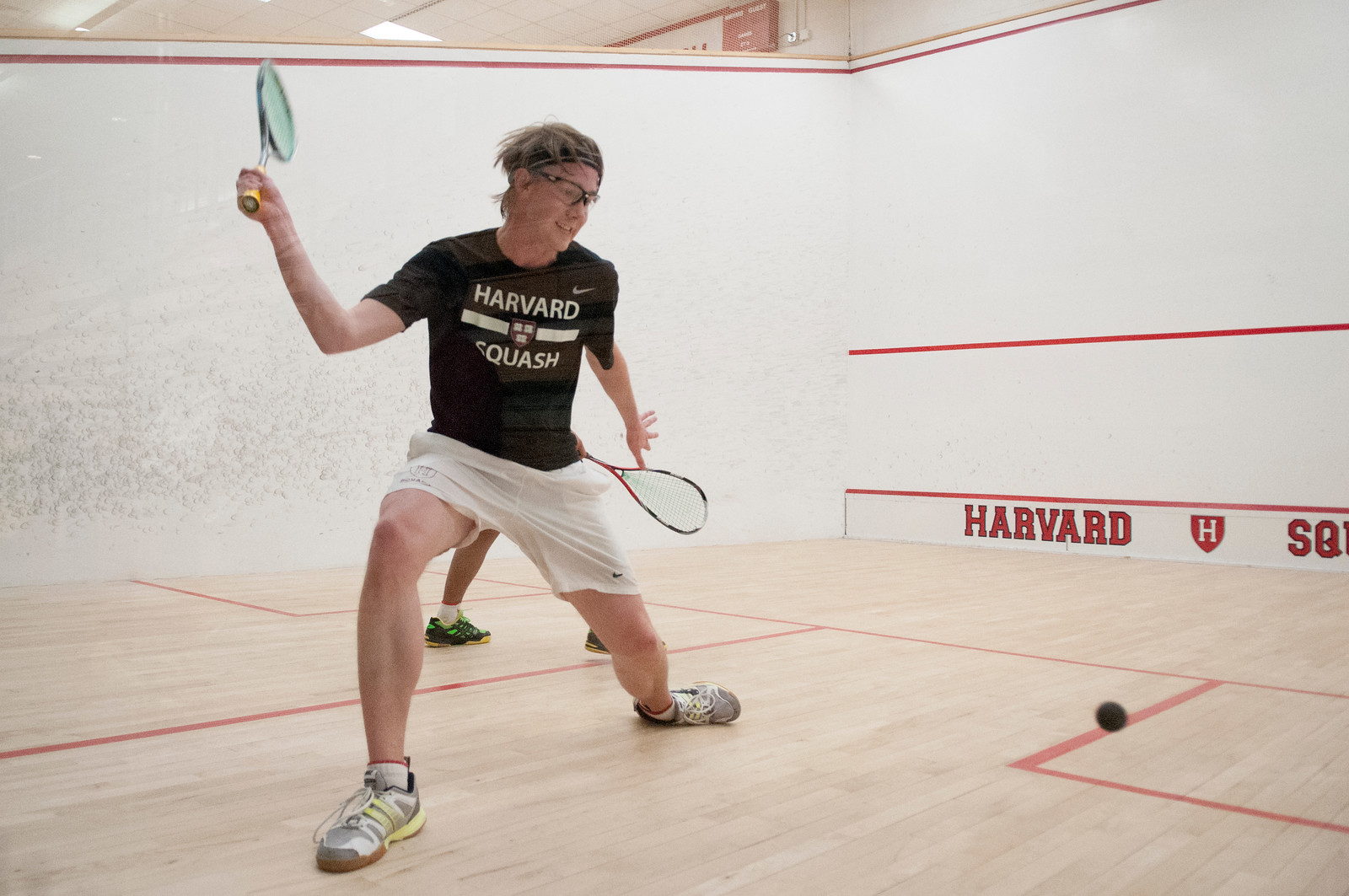 Co-captain Tyler Olson and the rest of the Harvard men’s squash team could not quite get the job done against top-ranked Trinity, falling 6-3. Olson’s five-game loss on Tuesday was his first of the season.
By J. Kevin Qualey, Contributing Writer

Entering Tuesday’s contest against Trinity, the Harvard men’s squash team looked to carry the momentum of an undisputed Ivy League championship, secured last weekend with victories over Brown and archrival Yale, into another big win.

But the Bantams had other plans for their stay in Cambridge.

After over a foot of snow postponed the match originally scheduled for Jan. 28, No. 1 Trinity (16-1) wouldn’t allow the inclement weather to stand in the way again as top-ranked squash powers clashed Tuesday at the Murr Center. The Bantams took down the defending national champion Crimson (8-3, 7-0 Ivy), 6-3.

“It was a very nice match,” Harvard coach Mike Way said. “We love playing Trinity. It was a good hard clean match against a strong team. The best team won.”

Down 4-3 with two matches left, the No. 3 Crimson was ultimately unable to recreate its season-defining win from last year’s campaign. The Bantams left little doubt about the result of the match as their final two players got off to a quick start, with junior Juan Vargas taking what turned out to be the clinching match, 3-0.

With the Crimson trailing 4-2, the team’s top player, freshman Madhav Dhingra, kept hopes alive after fighting back from down 2-1 to the Bantam’s No. 1 seed senior Vrishab Kotian. After some lively discourse with the referee in the fourth game, Dhingra didn’t look back, and closed out the final two games for the Crimson.

The result on its own was not enough to carry the Crimson to victory for the second straight season over the Bantams, as Trinity’s lower four seeds swept Harvard’s. None of these matches were decided in straight games, however, with one even extending into five games. Even the inconsequential final match of the game ended in a 3-1 victory for Trinity’s Moustafa Hamada over Harvard junior Matt Roberts.

The other players notching victory for Harvard came from two freshmen, Bradley Smith and David Ryan, at the third and fifth spots, respectively. No upperclassmen were able to secure points for Harvard on the night.

Sophomore Dylan Murray’s 3-0 defeat was closer than it appeared, however, as his opponent needed extra points to overcome him in two of the three games, with the third game reaching 15-14 before Miled Zarazua won the final point to get his squad one game closer to victory.

Harvard was unable to bounce back from the deficit. Co-captain Tyler Olson narrowly lost his effort in five games, and sophomore Devin McLoughlin fell in the same fashion.

The Crimson’s seven-game win streak wasn’t the only one to be broken on the night. Olson was dealt his first loss of the season, after having gone 9-0 on the season thus far. The effort to maintain his team-best record was made in earnest, as he went down narrowly, 3-2.

Trinity had momentum of its own, coming off of a NESCAC conference championship over the weekend and riding a five-game win streak to Cambridge.

“The takeaway will be in the mental adjustment for those that lost,” Way said. “We’re a very young team. [I’m] very proud of our lads having just won the Ivy League Title. We were the underdogs here, and we came very, very close. We know what we’re up against, and we know what we’ve got to do.”

After winning the first 26 matches between the two schools, the Crimson has recently been on a slide against the Bantams. Trinity has now won 25 of the last 29 meetings.

“We had Yale on Friday [and] Brown on Sunday,” Dinghra said. “It was really heavy match over-load…. Everyday you can’t expect to play your best squash. Its good to see our team coming together fighting. We just need a little extra push, and we should be good for nationals.”