NOTEBOOK: Men's Basketball Gets A Head Start on the Madness of March 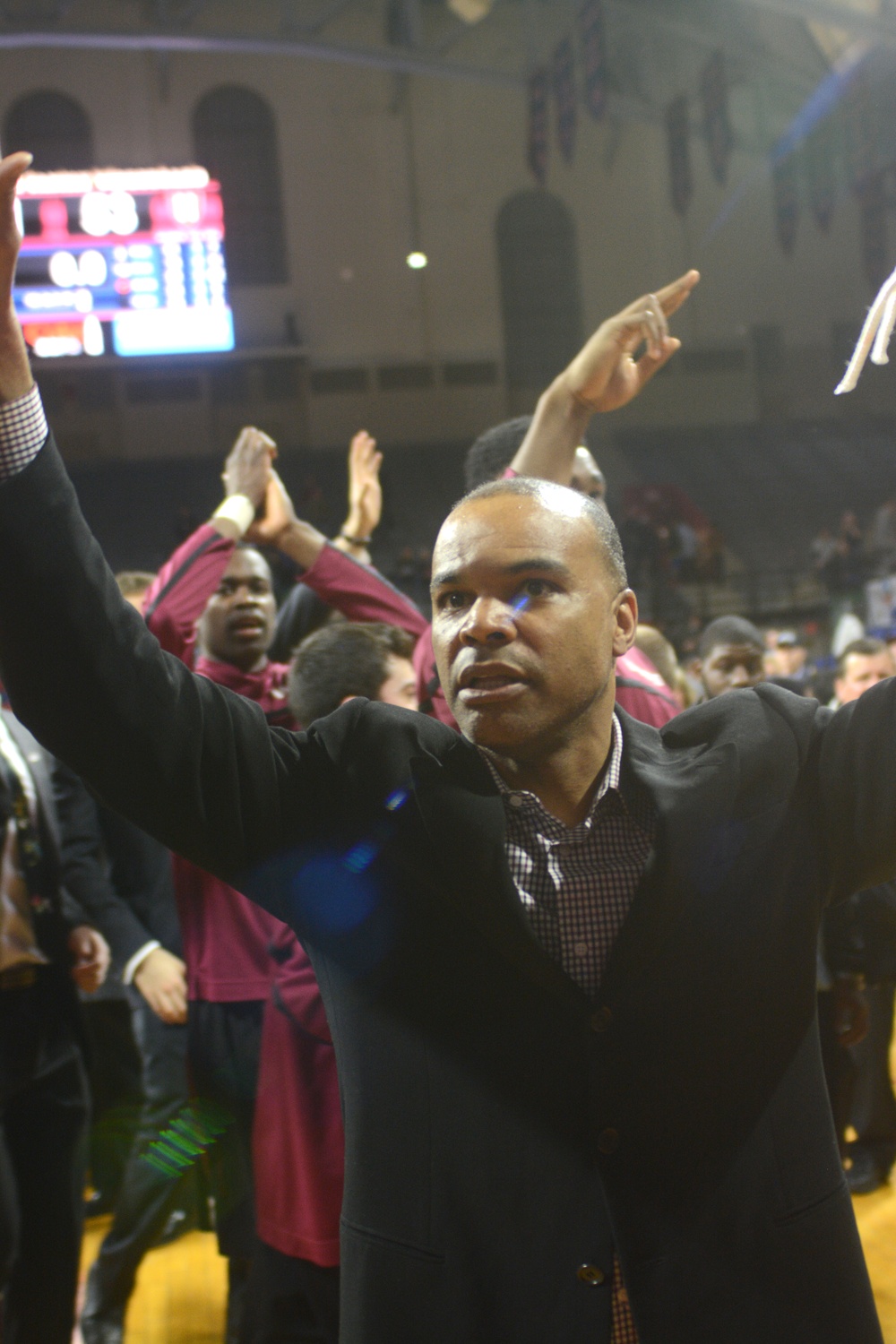 PHILADELPHIA—All attention was on senior wing Wesley Saunders as he, head down, barreled his way into the paint. As he planted his left foot in the heart of the key, his defender took a slight step backward, likely anticipating the trademark Saunders spin move—not the reverse pivot that took place instead, and certainly not his shovel pass to co-captain Steve Moundou-Missi that took place moments later.

And with the defense collapsed on Saunders, Moundou-Missi was wide open from the top of the key. He showed no hesitation before letting the ball go, and showed no sign of a celebration after the ball splashed through the net. But as he held his right wrist up in the air, the Harvard student section jumped to its feet. With Yale’s ensuing layup attempt unsuccessful as the clock wound down, the Harvard men’s basketball team was officially going dancing, defeating Yale, 53-51, in the conference’s one-game playoff Saturday afternoon at The Palestra.

“I trust Steve,” Saunders said. “He’s been carrying us down this last stretch defensively, offensively. I knew [that Yale was] going to collapse on me, and he played off my penetration, and he knocked down that shot—like I knew he would.”

Moundou-Missi’s demeanor in the game’s waning moments was indicative of the senior’s play over the past eight days, a performance that Saunders said has “carried” the team. After scoring 21 points in a losing effort against the Bulldogs (22-10, 11-3 Ivy) last Friday, Moundou-Missi once again kept the Crimson (22-7, 11-3) in the contest through his 36 minutes of play on Saturday afternoon—even when his teammates were struggling to find the bottom of the net.

The big man knocked down what was only his fourth three of the season in the first half to tie the game, limited conference player of the year Justin Sears to just five points in the second period, and, of course, sent the Crimson marching into madness with his straightaway jumper with less than 10 seconds remaining.

“Coach [Tommy Amaker] has been telling me to shoot the ball when I’m open—it’s a matter of confidence and not thinking about it,” Moundou-Missi said.

After the game, Moundou-Missi shrugged off the praise sent his way. It was Saunders’s set-up, Saunders’s pass, that won the game, he claimed—all he had to do was make the “wide open” shot.

But for a player more known for his defensive efforts than his offensive game, his last-second heroics epitomize the ‘madness’ so characteristic of collegiate basketball in March.

With just over 13 minutes to play, junior co-captain Siyani Chambers lobbed a long pass to backcourt-mate Saunders, who was waiting on the right wing. Saunders had just drilled a triple from the same spot, and immediately arced up another shot, with the Yale defense scrambling to get back in transition. As the ball sliced through the hoop, the ever-stoic Saunders turned away from the basket and began to skip up the court. He skipped all the way to Yale’s side of the floor, facing the Eli faithful, and stared at the sea of Yale blue before performing an emphatic, emotional fist pump.

Chants of “Let’s go Saunders” rained down from the Harvard student section, rewarding the senior for the latest basket in his personal 9-0 run—a 1:39 stretch of time in which Saunders singlehandedly transformed his team’s five-point deficit into a four-point lead, 36-32.

“[Saunders] made every big play we needed,” Amaker said. “[He had] big passes, big plays…. I’ve always said about Wesley what I said about Jeremy [Lin ’10], which is that it’s not about the points he scores, but the points he is responsible for. He put us on his back and carried us.”

The spurt began after Yale guard Javier Duren hit a contested floater to extend the Bulldogs’ advantage to 32-27. Only seconds later, Saunders received a pass on the right wing, bulldozed his way to the block, and bumped bodies with a Yale defender while spinning the ball into the basket. And one.

On the next defensive play, Saunders’s spiked down Duren’s attempted entry pass, before an Eli missed shot gave the Crimson the ball once more. Moundou-Missi found his classmate on the right wing, where Saunders shot over the outstretched arm of Bulldog Justin Sears. That basket gave Harvard its first lead since the opening half, setting up his transition triple—and his series of leaps to the Yale side of the court—just one minute later.

The game was still close, still only a two-possession game, but Harvard was back in control. And with Saunders replacing his typical dispassionate façade with his series of skips and his final, emotional fist pump, the Crimson ballooned its run to 17-5, effectively sealing the game both with Saunders’s passion and his performance.

“He made a lot of key baskets,” Yale coach James Jones said. “He stepped up and made some shots. We guarded him with a couple different guys, but he was able to knock down shots. That’s what good players do…. You expect he will step up and make plays.”

A win today, and Yale would’ve been competing in its first NCAA Tournament since 1962. Instead, the Elis will spend Selection Sunday waiting to hear whether they were allotted a bid to the NIT, a tournament thought of as a little brother to March Madness.

Harvard, meanwhile, will head from the hardwood of The Palestra back to Cambridge, where, at 6 p.m. Sunday night, it will find out where it’s competing and who it’s competing against when it takes the floor of the Big Dance later this week.

For this team’s seniors, several of whom were so crucial in the late stages of Saturday’s contest, the win against Yale guaranteed a fairy-tale ending of sorts to their collegiate careers, as while they entered as freshmen into a program that had never won an outright Ivy title, they will graduate never having lost the Ancient Eight crown. For these seniors, Moundou-Missi’s shot guaranteed that they will finish their times in Crimson at the exact place that they reached in historical fashion three years ago—at the heart of March’s madness.

“As a class, we talked about what we want our legacy to be,” Saunders said. “We wanted to cement our legacy tonight and come out with a victory. And we were able to do that.”