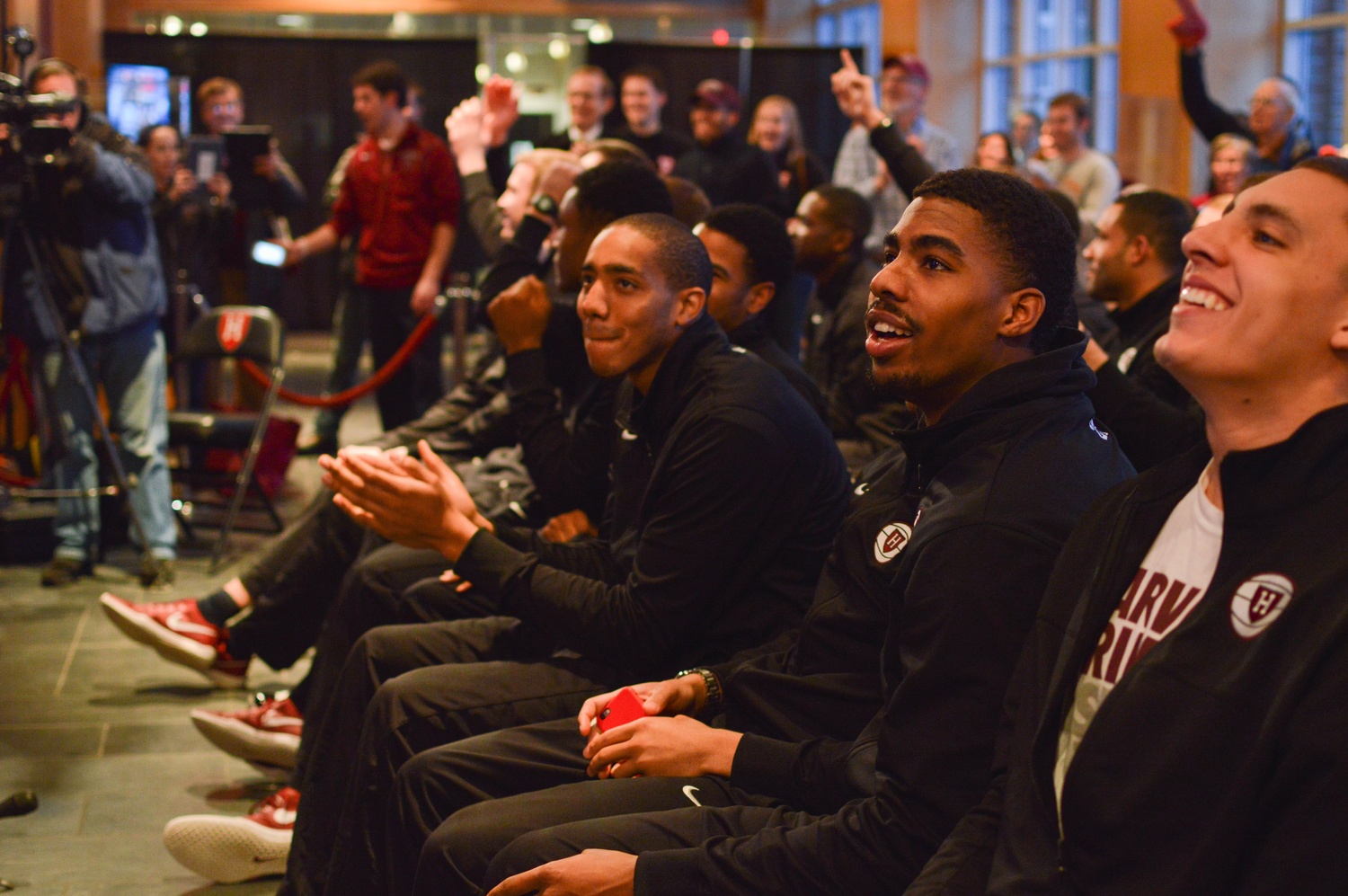 In a crowded Murr Center, players and supporters alike react to a television live-stream of themselves with applause and raised hands. Harvard will face off against North Carolina on Thursday. By Y. Kit Wu
By Juliet Spies-Gans, Crimson Staff Writer

On Thursday, Harvard hoops will face collegiate basketball royalty when it takes the floor in its fourth-consecutive NCAA Tournament, squaring off against North Carolina in the second round of the Big Dance at 7:20 p.m. eastern time.

The Crimson, which received a No. 13 seed, will travel to Jacksonville, Fla. for its matchup with the No. 4-seeded Tar Heels (24-11, 11-7 ACC), a squad that fell just short of the ACC Title on Saturday evening.

“[W]e are thrilled to represent our great conference in the NCAA Tournament,” Harvard coach Tommy Amaker said. “[W]hat an opponent for us. We can’t say enough about the excitement that this tournament brings for everyone…. We’re excited to keep going, and I think these guys are going to be excited to get ready for an incredible program and team that has done amazing things through the years.”

While Harvard (22-7, 11-3 Ivy) and UNC haven’t faced against each other in decades, Amaker, nevertheless, considers himself familiar with the Tar Heel system. As a former Duke player and assistant coach, Amaker has gained both knowledge and “appreciation” of his alma mater’s rival program, which he calls “as good as any” in the nation.

For the Crimson, controlling the paint and limiting second-chance opportunities will be key on Thursday. Featuring a coterie of talented, lengthy big men, the Tar Heels rank second in the country in rebounds per game at 41.0, with forwards Brice Johnson and Kennedy Meeks leading the squad from inside, averaging a combined 15.2 boards per contest.

On the other side of the court, UNC relies on a balanced attack in its fast-tempo offense, with four players averaging double-digit scoring for the season. Behind point guard Marcus Paige, who paces the team with 13.9 points per contest while shooting at a 38.6 percent clip from deep, the Tar Heels aim to push the ball on the break, and currently sit at 17th in the nation at 77.9 points per outing.

Both co-captain Steve Moundou-Missi and Amaker cited UNC’s activity on the boards and speed in transition as integral to what Amaker deemed “the Carolina system.”

“Their front line [is] long, deep, [and] absolutely terrific on the backboard,” Amaker explained. “[T]hey are [terrific] in transition—and we like to play that way as well, so [we have] similar philosophies in that regard. But certainly their transition game will be a bear to defend.”

The Selection Sunday news came just 24 hours after the Crimson clinched its bid to the tournament, punching its ticket in a come-from-behind thriller in which it defeated Yale, 53-51, thanks to a deep jumper from Moundou-Missi with just under eight ticks to play.

Following Saturday’s win, University President Drew G. Faust reached out to the team to express her support and her congratulations. Faust, who is currently in Beijing, woke up at 4 a.m. local time and checked the score of the Harvard-Yale game online, at which point Harvard was leading, 19-18.

“Harvard's victory over Yale in Philadelphia is a tribute to the perseverance and grit of the entire team and to the leadership of Coach Amaker, who has engineered an unprecedented record of success,” Faust said in a statement. “I was excited to learn about their achievement when I woke up this morning in Beijing, and immediately emailed Coach Amaker to congratulate him and the players. I look forward to cheering them on as they compete in the Big Dance for the fourth year in a row.

The last two seasons, the Crimson has played the role of Cinderella on the biggest stage of collegiate hoops, upsetting New Mexico and Cincinnati in 2013 and 2014, respectively. The squad came close to busting millions of brackets last season when it staged a 16-point comeback in the Round of 32 against popular title favorite Michigan State, taking the lead for a few moments late in the contest.

For years, Amaker has instilled in his team a mantra of sorts, one that stresses that the team’s “internal standards” trump any “external expectations” put forth by the white noise of the media or anyone else outside the closed circle of the locker room.

For the seniors—a group that has witnessed the program’s first tournament berth since 1946, the first March Madness win in school history, and its first AP preseason top-25 ranking—this season’s Big Dance will be their final chance to embody Amaker’s hardwood philosophy. It will be their final opportunity to “carry on” the recent success of the program, as senior wing Wesley Saunders phrased it—trying one last time to don the Cinderella slipper, with the single goal of busting brackets when it takes on the storied Tar Heels program in Jacksonville this Thursday.

“It just means everything really,” Saunders said. “This was the dream that we all had when we came to Harvard, to have this level of success, and just to be able to see it all happen has been great. We’ve worked so hard for all of this…and it’s just a testament to all of our hard work.”