Though Amaker will don Crimson red on Thursday, his Blue Devils roots link him closely to second round opponent North Carolina 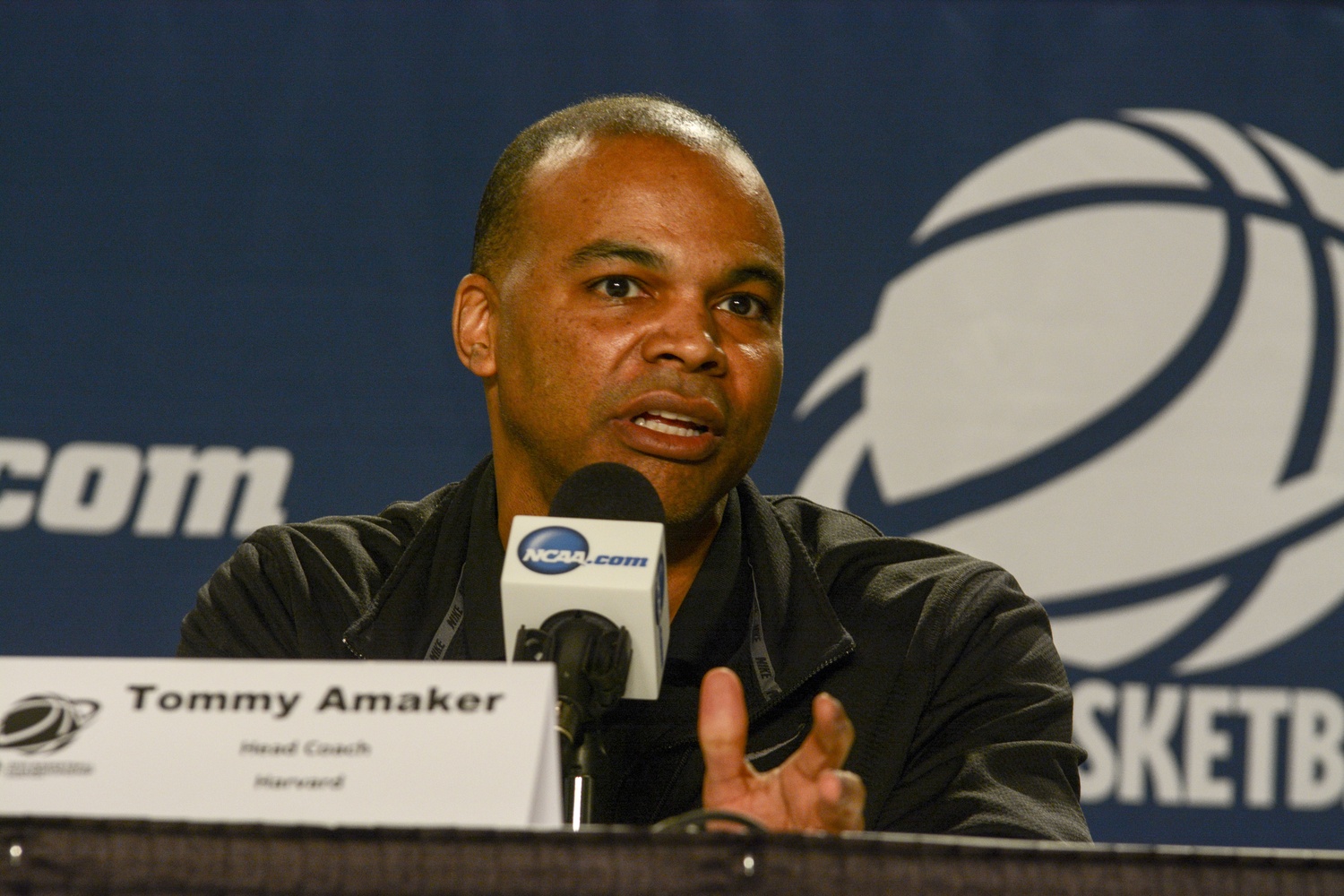 Recruited by renowned Duke coach Mike Krzyzewski, Harvard coach Tommy Amaker can be considered as part of the foundation of a program that, in the past 30 years, has grown into the powerhouse that Duke is regarded as today. Now, Amaker finds himself coaching against Blue Devils rival North Carolina in the second round of the NCAA Tournament. By Robert F Worley
By Juliet Spies-Gans, Crimson Staff Writer

"I have some history going against North Carolina…" Harvard coach Tommy Amaker said.

JACKSONVILLE, Fla.—“I have some history going against North Carolina…”

So said Tommy Amaker to a room full of media just minutes after learning that his Harvard men’s basketball team had drawn the Tar Heels as its second-round matchup in this year’s NCAA Tournament. Amaker paused for a brief moment as his comment drew a few laughs from the press, and then continued, expounding his relationship with North Carolina and extoling the past and present successes of the program.

Amaker, of course, is a proud Dukie; recruited by Blue Devils coach Mike Krzyzewski just one year into Krzyzewski’s tenure, Amaker can be considered as part of the foundation of a program that, in the past 30 years, has grown into the powerhouse that Duke is regarded as today. From the first time that Krzyzewski saw Amaker—in Falls Church, Va., when the latter was just a sophomore in high school—he was determined to see the point guard in Durham, N.C., a fact evinced by the opening words Krzyzewski spoke to Amaker’s mother: “‘Mrs. Amaker, your son is going to look great in Duke blue.’”

Krzyzewski, however, was not the only coach that envisioned Amaker in that shade of jersey. Roy Williams, the current head coach and then-assistant coach of Duke rival North Carolina, also lauded Amaker’s play. However, despite Williams’s sentiment towards Amaker, he was unable to recruit the point guard, as the Tar Heels had already set their minds on a different ball-handler—future standout Kenny Smith.

“I loved Tommy when he was in high school,” said Williams at Wednesday’s press conference in Jacksonville. “I thought he was the most complete point guard out there in his class. He could score, he could defend, he was a coach on the court. He didn't make silly mistakes…. I really did have a great deal of respect for him as a player.”

Two years later, Amaker did indeed don the Duke blue and went on to play floor general in the Blue Devils’ ride to the national championship game in 1986, captain the team in 1986-1987, and return to Durham in 1988 as one of the program’s assistant coaches, a position he kept for a decade.

But as Williams left the Tar Heels for a head coaching job at Kansas the very year that Amaker joined the Blue Devil staff, the two’s overlap was virtually nonexistent. Ironically, it wasn’t until Amaker had left Duke and arrived at Seton Hall that the pair matched up in their first coaching duel, with Williams still on the Jayhawks’ bench.

Now, just about three decades after Williams first watched him play on his high school’s hardwood, Amaker will finally get the chance to face off against the program that he was taught to ‘hate’ and the coach whom sat on his rival’s sideline for so long.

But Amaker’s first thought after drawing North Carolina as his dancing partner was one of respect for, not rancor towards, the Tar Heels and, especially, Roy Williams—the man who he had played in front of in high school, played against in college, and competed against just once since entering the ranks of Division I coaches.

“[I] have a great appreciation for how awesome [North Carolina has] been throughout the history of college basketball,” Amaker said on Sunday. “What a program they’ve had through the years—players, and great teams and coaches—it’s as good as any.”

“[Williams is a] wonderful man, a wonderful guy,” Amaker continued. “He’s always been terrific to me…. [In] the coaching fraternity, everyone respects him greatly for his achievements but also for the kind of person he is.”

But there’s also some trepidation of playing a storied program like North Carolina, which features a frontline that truly redefines the descriptor ‘rangy.’ The Tar Heels are coming off of a big win over Virginia and a nearly-successful run through the ACC tournament, falling only in the title game to a talented Notre Dame squad. Harvard, meanwhile, has beaten only one NCAA Tournament team all year: Northeastern, in the opening weeks of the season, almost four months ago.

“[F]or me, thinking about how terrific and great [the Tar Heels] are and they always have been, it wasn't necessarily a very pleasant thought internally when I saw the actual draw,” recalled Amaker on Wednesday.

Amaker certainly knows what it feels like to go up against the program from Chapel Hill, having either played or coached against it for nearly half of the last 30 years. This is the team he has battled against upwards of 25 times since he first threw on the Duke blue; this is the squad he fought with for every inch in the ACC standings for that decade and a half. He might call the sideline of Lavietes Pavilion home now, but the mentality that Krzyzewski instilled in him all those years ago is still somewhere, evidenced by his admission that after he heard North Carolina’s name called on Sunday he thought to himself, “Boy, this is who we have to play?”

Perhaps Harvard senior wing Wesley Saunders phrased it best when he said that he was certain that Amaker is “having some flashbacks” and that it’s “nostalgic for him to be matched up against UNC.”

But, according to Amaker, it’s important to remember that he aligns himself now with Cambridge—not Cameron, Duke’s storied stadium. His rival is now Yale, whom his squad took care of last weekend—not the Tar Heels, whom Harvard hasn’t even faced since the 1970’s. For Amaker, that is, his past with the Blue Devils and his present with the Crimson split as he throws on the proverbial Harvard hoops pinny, shedding the blue that Krzyzewski spoke of in that high school gym in Falls Church, Va. along the way.

“I try to honestly keep my history out of it,” Amaker said on Wednesday. “It's not about me. It certainly is about what these kids have accomplished in our program…and how excited I am for them. But certainly they recognize, and we all do, the history and the tradition and the greatness of Carolina basketball, and so anything with me is really irrelevant…. [We’re just] hopeful that we will play well to showcase Ivy basketball.”