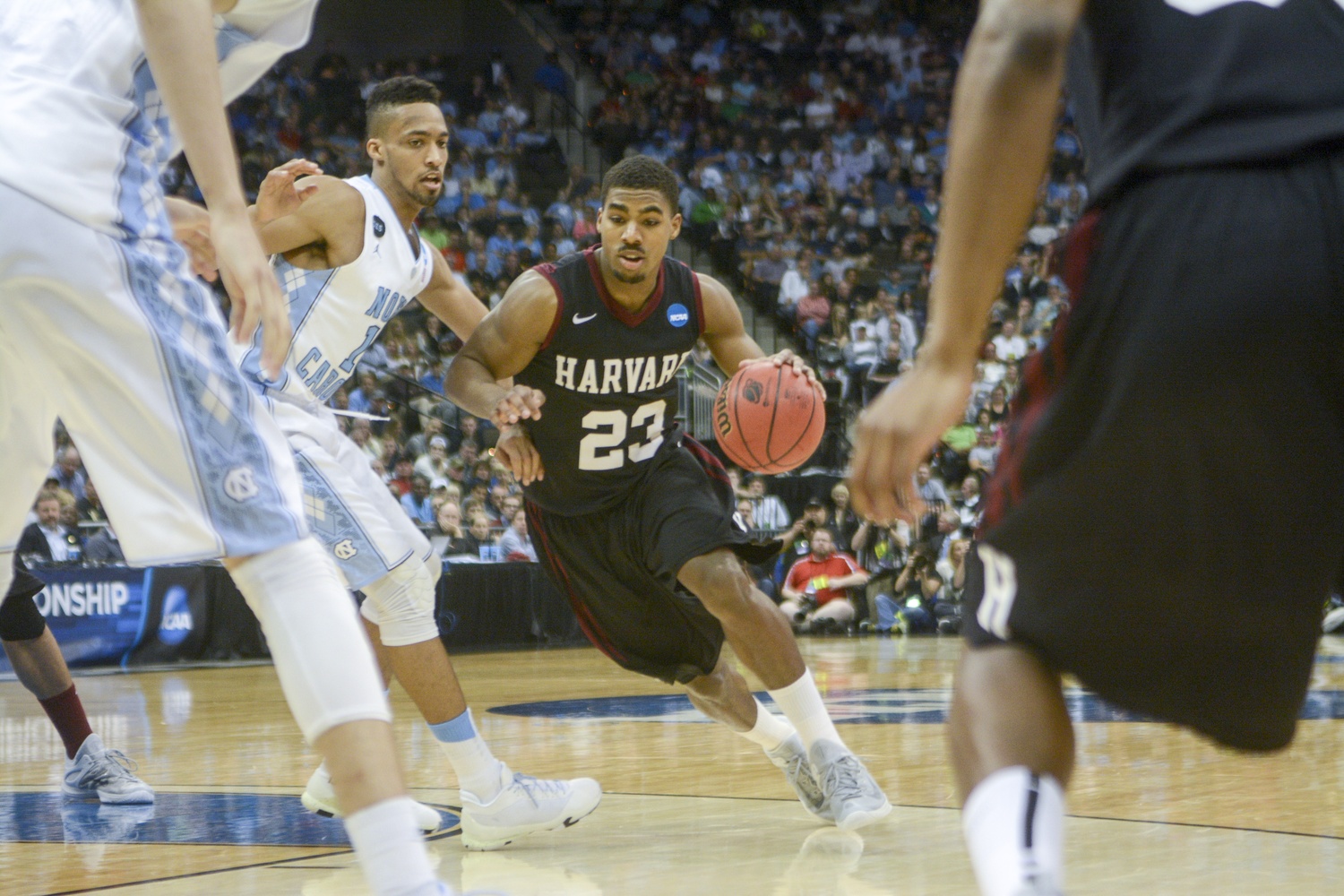 On the biggest stage of collegiate hoops and with his team down, 5-1, senior wing Wesley Saunders corralled the ball near the top of the key. He took one dribble towards the paint before crossing the rock between his legs and stepping back to the top of the circle. He hoisted the ball up near his right shoulder and let the shot fly.

Just one minute later, Saunders held the ball at the top of the key once more. This time, his between-the-legs dribble was followed with two crossovers, losing his defender as he sent the rock back to his strong hand. With just one second to spare on the shot clock, Saunders skipped down the right side of the lane and laid the shot off the glass and into the hoop.

Next, he caught a pass on the left wing, with only seven ticks remaining on the clock. The senior took two hard dribbles towards the baseline before he stopped on a dime, fading backwards as he released his jumper. The swish of the net and the shot clock’s horn rang out at the same time, and Harvard was back in the game.

Fewer than five minutes had elapsed in the Crimson’s NCAA Tournament matchup against North Carolina, but former ACC All-Defensive Team selection J.P. Tokoto had already given a proverbial shake of his head. His assignment was to guard Saunders, who was singlehandedly keeping Harvard in contention in the game’s early going. As the left-baseline fadeaway jumper splashed through the hoop, the score was North Carolina 8, Saunders 7, with each of the latter’s baskets knocked down in his characteristic effortless fashion.

“He's a really tough matchup,” said Tar Heel point guard Marcus Paige on Wednesday. “I think J.P. will have his hands full, but he's accepting that challenge…. I think [Saunders] was first team All-League in Harvard's league or player of the year or something. Obviously, we're going to respect him and try to make everything tough for him.”

Minutes after a 26-point, 8-of-14 shooting performance from Saunders that willed his Crimson back into the contest and nearly willed it into the Round of 32, North Carolina’s answer regarding Saunders became less ambiguous and more adulatory, with Tar Heel coach Roy Williams acknowledging the defensive difficulty with which Saunders had presented his squad, despite Carolina’s eventual 67-65 victory.

“Well, we thought we had a strategy for him, but it didn't work,” Williams said. “[H]e was a load, and we knew that…. [Tokoto] really did a pretty doggone good job, but he was really, really hard to guard.”

The difficulty in guarding Saunders stems in part from his offensive versatility. Through intermission, Saunders had either assisted on or scored every Harvard basket, a statistic indicative of his play throughout the conference season. Saunders was third in the Ivies in scoring this year, coming in second in assists per game as well—only 0.1 dime per contest behind teammate junior co-captain Siyani Chambers.

This dual ability to create offense for himself or for his teammates with seeming equal ease was exactly what the Tar Heels struggled to contain down the stretch of Thursday’s matchup. Carolina’s lead would climb to as many as 16 before Saunders’s efforts began to make a dent in the score, with four free throws, a three-pointer, and two assists from the wing bringing the Crimson within single digits with 11:55 to go. From there, a trademark Saunders spin move in the paint led to a fadeaway with 7:40 to play, cutting Harvard’s deficit to seven, while his short corner jumper with just three seconds left on the clock brought Harvard within two, 63-61, with only 2:43 remaining.

Thursday’s contest wasn’t the first time that the former Ivy League Player of the Year lit up the stat sheet with all eyes on him—since Saunders became a starter his sophomore season, he’s led his team in scoring in four of the five Tournament games in which it has competed, racking up a combined 86 points in those appearances. Just a week before he shared the court with North Carolina, the senior had offered up a 22-point, 8-of-15 from the floor performance against rival Yale that punched Harvard’s ticket to March Madness, sending the Bulldogs back to New Haven, Conn., as the Crimson began its march towards Jacksonville, Fla.

So, in the waning moments of Thursday’s game, it wasn’t a surprise when Harvard coach Tommy Amaker elected to have the ball in Saunders’s hands with a chance to win the contest. With the Crimson down two and 10 ticks to go, it was Saunders—who had carried his team all night, all season—that held the rock on the perimeter, staring down Tokoto as a group of Harvard fans counted down what were potentially the last seconds of his collegiate career from the stands.

“I realized the clock was running down, so I had to get up a shot,” Saunders recalled.

His contested three-pointer was long, and he turned, masklike, to the Crimson bench where his teammates had fallen silent. It was the last shot in the last game of a collegiate career that Ivy hoops pundits have begun to compare to that of Jeremy Lin ’10, and those in the arena were left with the feeling that if the attempt had been just another inch off, perhaps it would’ve banked into the hoop, extending Saunders’s Harvard playing days one more game.

But Saunders has never been one to play the hypotheticals—to dwell on the what-ifs. His game has always typified the sports cliché of ‘playing in the moment,’ as he continually talks of reading the defense, and choosing his offensive weapon—a pass or a shot—based on how his opponent tries to guard him.

The last-second jumper on Thursday was no exception. He recognized how the defense was set—Tokoto was sagging off, expecting the drive, while a second Tar Heel stood in the passing lane between Saunders and Corbin Miller, the teammate to whom he hoped to send the ball—and went all-in behind a high-arcing, crowd-hushing three-point attempt that seemed to hang in the air for a tick longer than normal.

“It felt kind of good,” Saunders said. “And it just went off the backboard…. [I]t was just demoralizing.”

After the game, Tokoto called Saunders among the “top five” players he’s guarded all year, placing the senior in the ranks of wings from Duke, Kentucky, and Virginia. Teammate and co-captain Steve Moundou-Missi called his performance “second to none” and “incredible,” while Amaker deemed it “exceptional” and “terrific.”

For a player who surpassed Lin in scoring against Yale, who eclipsed the 1500-point career mark in the Big Dance, and had his way against collegiate basketball royalty in North Carolina for 40 minutes on Thursday night, that just-long, just-wide three was not how he hoped his time in crimson would end.

But for all those around him—on the bench, in the stands, and on the court beside him—there wasn’t anywhere else they’d rather the ball be with the game on the line than in Saunders’s possession: in the hands of the player whose trademark fadeaways, spin moves, and ever-calm demeanor had led them to win after win, both under the bright lights of the NCAA Tournament and in front of an ever-packed crowd at Lavietes Pavilion.

“We wanted…for Wesley to make a decision,” Amaker said. “The way he's been playing, [the way] he played tonight—he was outstanding. I thought he was as good as anybody that played in our game here this evening. So if he was going to get a three, get a drive, get a two, we were going to live with his decision there.”

“[W]e came out and battled and we fought against a great team, and that's all you can really ask for,” Saunders added. “I wouldn't rather go out there and battle with any other group of guys…. Everybody is like family. We've been through good times, bad times, and, I mean, it's just been a blessing that I've been able to be a part of this.”