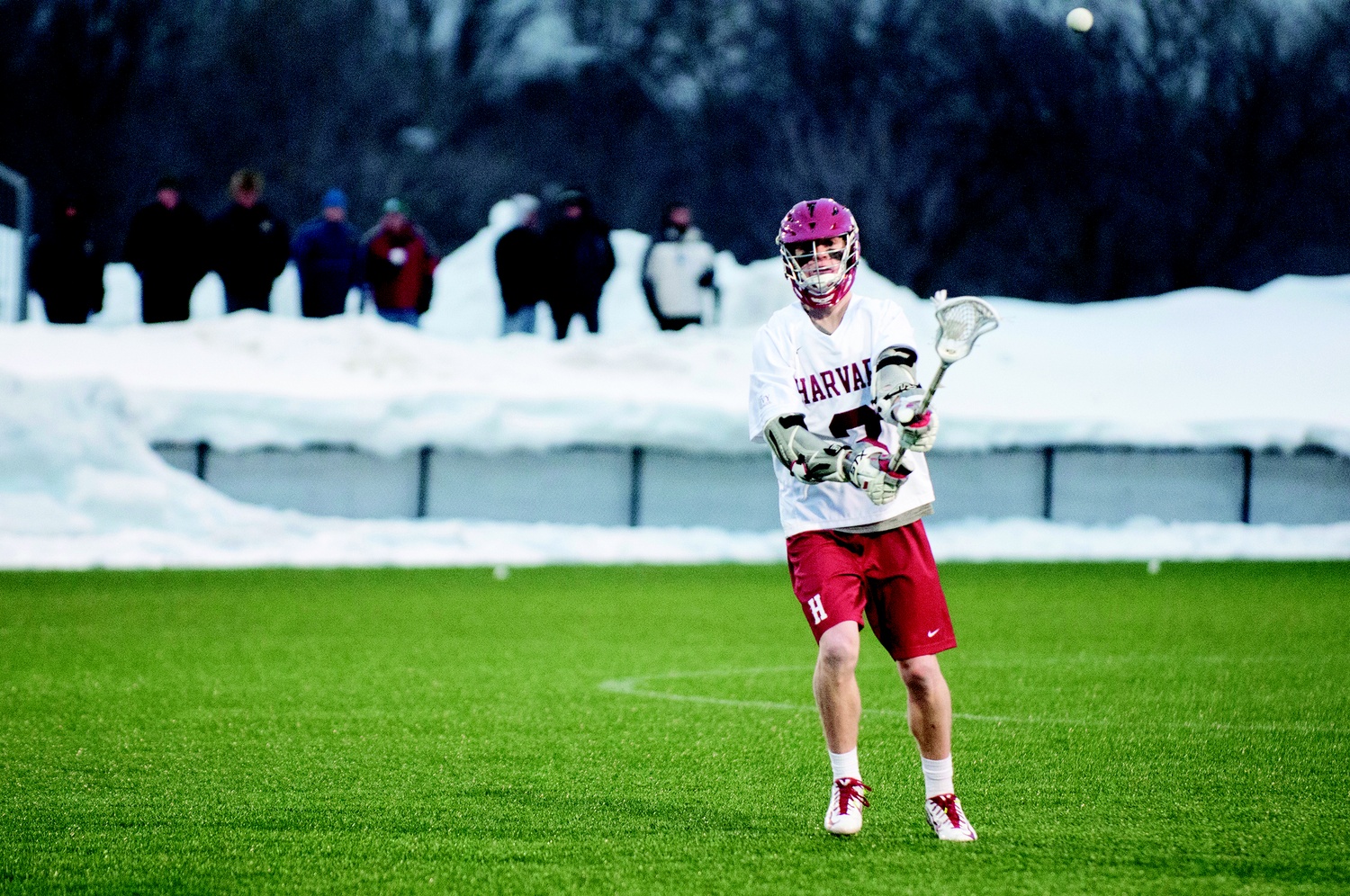 With the score knotted at nine and under three minutes to play, Penn freshman midfielder Kevin McGeary completed his hat trick and gave the Quakers their first lead of the game.

That would be the only lead Penn (5-6, 2-3 Ivy) needed as the visiting Quakers held on for a 10-9 victory over the Harvard men’s lacrosse team (6-6, 1-3) on Saturday at Soldiers Field Lacrosse Stadium. Penn kept the Crimson scoreless for the final 10 minutes of the contest.

Harvard entered the matchup with the Quakers coming off back-to-back one-goal wins, including a victory over No. 8 Cornell that got the Crimson in the win column in Ivy League play. Just as it did against the Big Red, Harvard stormed out to an early lead on Saturday as a goal by senior long stick midfielder Brian Fischer gave the Crimson a 3-1 advantage.

Although Penn responded with a tally to pull within one at the end of the first quarter, sophomore faceoff specialist Austin Williams won the opening draw of the second frame and went straight to the cage, notching his second goal of the season to bring the lead back to two goals.

The second half, however, was an entirely different story for the Crimson. Although Harvard outshot Penn, only nine of its 22 second half shots were on net.

“Our inability to finish our possessions and finish our opportunities was the biggest difference-maker in the game,” Harvard coach Chris Wojcik ’96 said.

Senior goaltender John Lopes replaced junior starter Jimmy Sestilio in cage for the Quakers to start the third quarter, and he turned away five shots in the period to hold the Crimson to just one goal in the quarter.

“A lot of credit ought to go to Lopes,” junior goalkeeper Bryan Moore said. “[He] gave them the spark they needed in the second half.”

Moore himself has experience in the same situation, as his stellar second half relief play in early-season tilts with UMass and Quinnipiac sparked Harvard to victories and earned him the starting nod for the rest of the season.

Despite the lack of offense for the Crimson, the home squad still carried a 7-5 lead into the final 15 minutes after limiting Penn to just two goals in the third quarter. Senior midfielder Joe McCallion had both markers for the Quakers in the frame, increasing his team-leading total to 21 for the season.

In the opening minutes of the fourth quarter, the teams traded tallies to bring the score to 9-7 in favor of Harvard. However, the Penn defense again stifled the Crimson offense down the stretch, while the Quaker offense did just enough to pull ahead. McGeary led the charge down the stretch, scoring two of his three goals during the three-goal run to close the game.

“[The result] was frustrating. We couldn’t separate, we had the lead the whole game,” Wojcik said. “That, I think, was a flaw in the way we played.”

Saturday’s game was the third straight one-goal game and fifth of the season for Harvard. Additionally, three of the team’s league games have been decided by one goal, reflecting the parity that has existed in the Ancient Eight all season. Despite currently residing on the bottom of the league standings, the Crimson can sneak into the postseason Ivy League Tournament with wins over Princeton and Yale to end the year.

“Our next two contests are under our control,” Moore said. “We have confidence that we can beat anyone if we play Harvard lacrosse for 60 plus minutes, so that’s what our goal will be moving forward.”