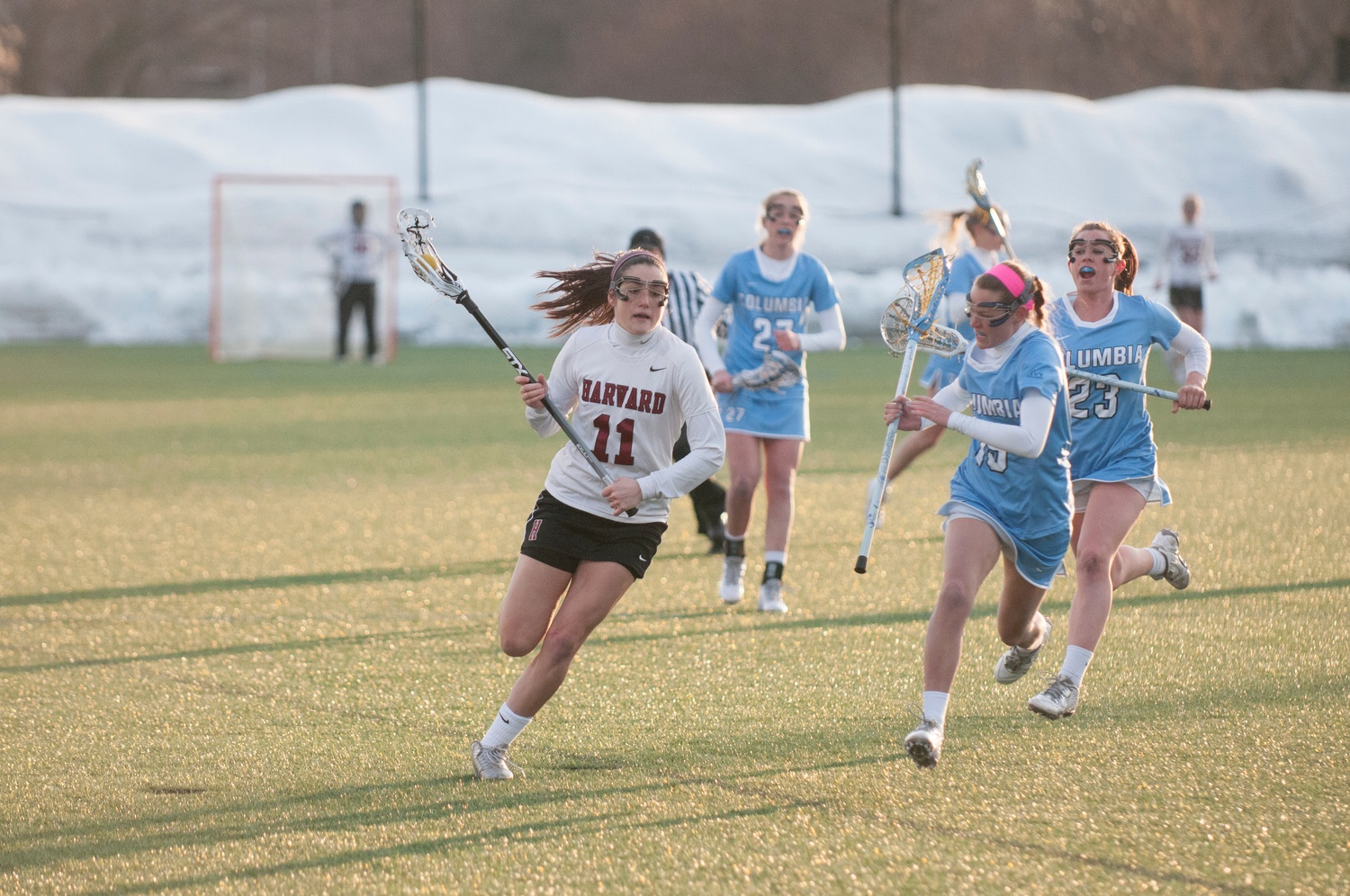 With a young team, the Crimson looked to its early games for experience before Ivies. By Mark Kelsey
By Kelley Guinn McArtor, Crimson Staff Writer

Although it currently stands with a .500 record at 4-4, the Harvard women’s lacrosse squad has sharpened a young team into a mature squad ready to dive into Ivy League play because of its tough schedule.

The Crimson (4-4, 2-1 Ivy) has contended against upper-echelon teams such as No. 7 Syracuse, No. 4 Virginia, No. 13 Stanford, and No. 15 Princeton. Harvard has held the scoring gap to five goals or fewer against these teams, notably falling by only a single goal to the then-No. 5 Orange.

“We haven’t been winning, but we’ve been competing, which is exciting,” Harvard coach Lisa Miller said. “I think that the idea was to build confidence in the program and then compete with the top programs in the country, which we’re doing right now. Then we have to start winning some of these games. We’re close—we’re just not finishing up the games.”

The Crimson’s only four losses came from its top-15 matchups, with Harvard notching four decisive victories over Hofstra, Columbia, Stetson, and Dartmouth, The team is optimistic that the tough schedule will pay off in Ivy League play.

“Our coach thinks it’s really important to play a tough schedule,” said junior co-captain and defender Tory Waldstein. “It really helps us because now, as we’re heading into more league play, those out-of-league games that were really tough competition and ended up being losses in our record are actually more important…. Overall, it definitely helps our team. It gives us more confidence in terms of what we can accomplish moving forward. Even though we’ve lost a few games, it’s definitely a good thing.”

Harvard edged out Columbia, 13-9, in its first league game of the season. The team’s sole league loss, 17-12, came in an away game against then-No. 13 Princeton—a match that was tied, 6-6, heading into halftime.

The Crimson squad is ready to face more Ancient Eight  teams in the coming weeks.

“I think everyone is really excited to get back into Ivy League play,” said junior co-captain and  midfielder Audrey Todd. “In-league games are always a fight to the finish, and each one is critical since only four teams make the end-of-season tournament.”

A major rivalry matchup will occur in mid-April when Harvard competes against Penn in its next home Ivy League contest. The Crimson fell to the Quakers in double overtime in the Ivy League Tournament semifinal last season, ending Harvard’s 2014 campaign. Penn went on to win the league tournament and make the second round of the NCAA tournament.

“I think [Penn] is definitely one of our biggest rivals in the league,” Waldstein said. “So that’s a game we’re all really looking forward too. We’re definitely taking one game at a time and really just trying to make sure we are successful enough to get into the tournament, and then we can be successful there too.”

Although the Crimson failed to clinch the Ivy League title last year, the 2015 Harvard squad has hopes of improved play and execution this league season.

The team’s athleticism and speed is apparent in defensive and draw control statistics. On defense, the Crimson has successfully executed 94-of-110 clear attempts overall and 37-of-42  in Ivy League play. Harvard has also forced 52 turnovers, including nine from sophomore defender Emma Ford.

Sophomore midfielder Maeve McMahon leads Harvard in draw controls, contributing 18 of the team’s 87 on the season.

“We are balanced,” Miller said. “We’re very, very balanced. We’re balanced on attack, we’re balanced defensively. We are significantly better in the clearing game than we were last year at this time. We’re quick and agile to the ball and on the draw circle.”

Offensively, sophomore attack Marisa Romeo leads with 25 goals, followed by 15 goals from Todd. Sophomore attack Megan Hennessey has chipped in a team-high  10 assists and contributed the second-highest number of groundballs, 11, and draw controls, 14. Five of the six top scorers for the Crimson are underclassmen.

“I think that we are really strong on the defensive side of the ball because most of us have been playing together for at least two years—some of us three years,” Todd said. “We are a bit younger on the attacking side of the ball, so we are still working through a few kinks. But we have a ton of talent, so soon we will be really, really good.”

“I think it’s worked really well,” Waldstein said. “We’re all in different positions…it brings three unique perspectives and leadership to different parts of the field. I also think we’re pretty different in terms of personality, which I think is really helpful. Some of us are more talkative or more outspoken, so it really adds a nice balance working together.”

Waldstein and Weis lead the Crimson on the defensive side of the ball, with Waldstein tallying four caused turnovers and Weis recording 63 saves along with a 44.9 save percentage.

“It’s nice to have three captains who sit in different position,” Miller said. “Kelly obviously in the cage—she can see everything from back there. Tory is the defensive communicator and the communicator in the clearing game.”

Offensively, Todd ranks among the top four on the team in goals and assists.

“Audrey is one of those players that if you’re not a coach, maybe you’re not going to notice her,” Miller said. “But for a coach, you see that she fills up those stat columns, she does all the little stuff well, she’s ground balling, she’s draw controlling, she’s taking shots, she’s finishing shots, she plays great defense…[The captains’] expectations for themselves and the program are pretty high, and they’ve provided very good leadership up to date. They compete.”

Despite siting at only .500 thus far on the season, Harvard has averaged roughly 11 goals per game and notched a 77.3 on-goal shooting percentage.

“I think this team probably has the most potential of the three years that I’ve been here,” Waldstein said.“I can’t say that I’m anything but happy with the group,” Miller added. “We practice hard, we learn pretty quickly, and we compete. We’re not rolling over.”

—Staff writer Kelley Guinn McArtor can be reached at kelley.mcartor@thecrimson.com.