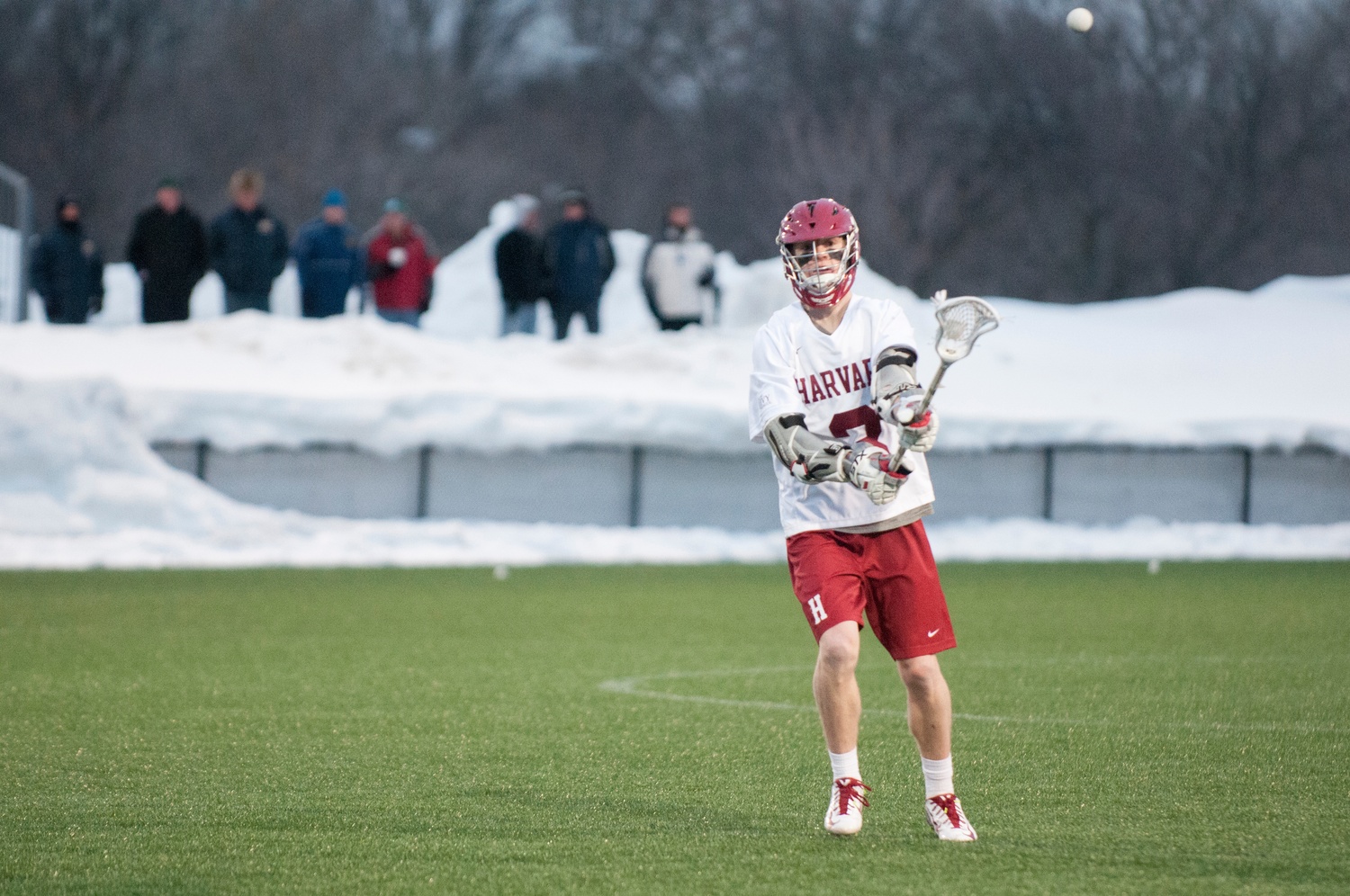 After a Cornell goal with 40 seconds left threatened to send the game into overtime, junior attackman Devin Dwyer picked off a pass intended for Big Red defenseman Jordan Stevens just moments later and scored to regain the lead for the Harvard men’s lacrosse team. The Crimson (5-5, 1-2 Ivy) then shut down a final effort by No. 8/6 Cornell (7-3, 3-1) to seal a 10-9 victory against its Ivy League rivals on Saturday at Soldiers Field Stadium.

“Our defensive group sold out for each other all game and didn't budge in the last few seconds, forcing [Cornell senior midfielder] Buczek into a shot that I could handle,” junior goalkeeper Bryan Moore said. “I was proud of the way all 16 guys that found themselves on the defensive end of the field at some point handled themselves. Those guys delivered a fantastic performance and I'm immensely proud of them.

Coming off a ten-day layoff, Harvard opened the contest brimming with energy. After sophomore face-off specialist Domenic Massimilian put the Big Red on the board just five seconds into the game, the Crimson controlled the rest of the quarter, forcing eight turnovers while limiting the Cornell offense to just six shots.

“We made some slight schematic adjustments,” said Harvard coach Chris Wojcik ’96. “The break definitely helped us regroup, reset, and then be fresh for [the game].”

Freshman midfielder Morgan Cheek struck first for Harvard, netting the second goal of his career to tie the game. Junior midfielder Sean McDonagh and Dwyer would both add tallies, giving the Crimson a 3-1 lead after the opening frame.

Cornell started the second quarter with back-to-back goals to level the score, but Harvard responded with a goal by freshman midfielder Robert Mencke to push the score to 4-3. Sophomore long stick midfielder Matt Ryan set up the shot with a nice play in transition, as he dumped the ball off to Mencke while falling down. The Dallas native caught the ball in stride and fired it stick-side high for the first goal of his career.

After the Big Red answered again to make it 4-4, junior long stick midfielder Jack Breit weaved through the Cornell defense before slotting home his third goal of the season. Junior midfielder Ian Ardrey then tallied with just over a minute left to give the Crimson a two-goal lead heading into halftime.

Coming out of the break, Harvard scored another transition goal, as Ryan ripped a bounce shot to the upper corner off a pass from junior midfielder Brendan Newman. The marker pushed the score to 7-4, giving the Crimson its largest lead of the game.

“Cornell…outplayed us significantly [at the face-off X], so we weren’t going to get as many settled offensive opportunities,” Wojcik said. “We really wanted to push the ball in transition and create scoring opportunities there, and I thought our long sticks did a great job with that.”

However, the Big Red would battle back with a 4-1 run, tying the game at eight with eight minutes left to play. Cornell was able to wear down the Harvard defense with a number of sustained possessions late in the third quarter, and the Big Red offense capitalized early on in the fourth.

On a day when Harvard received offensive contributions from a number of unlikely sources, the squad ultimately turned to its leading scorers down the stretch. With just three minutes left, freshman midfielder Joe Lang got underneath his defender on a dodge from the wing and scored to give the Crimson the lead.

When Cornell senior attackman Dan Litner finished a crease feed from classmate Matt Donovan to tie the game at nine and Massimilian corralled the ensuing face-off, the Big Red appeared in control. However, Dwyer stepped in front of Massamilian’s pass and made a leaping one-handed catch before netting the game winning goal as Cornell sophomore netminder Christian Knight scrambled to get back in cage.

Coming into the game with four straight losses and nursing an 0-2 record in Ivy League play, Harvard was able to reverse the trend against a potent opponent.