The Place of Club Sports at Harvard 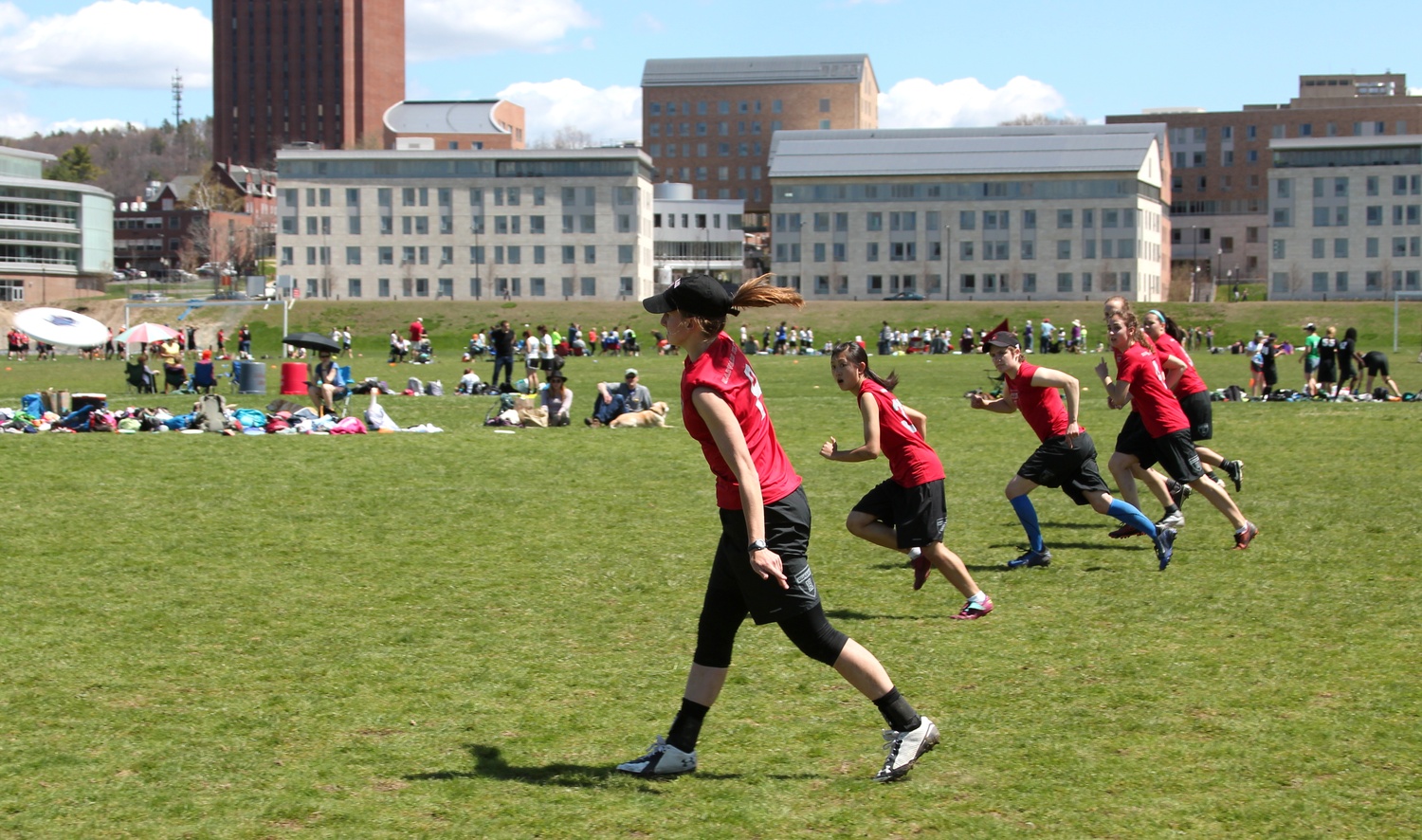 The Harvard Quasar, alongside the Harvard Red Line, have put Ultimate Frisbee on the map in Cambridge. By Courtesy of Claire Houlihan
By Theresa C. Hebert and J. Kevin Qualey, Crimson Staff Writers

On Oct. 13, 2012, Harvard and Yale took to Jordan Field for a matchup that had been in the making for over a century.

In response to a challenge issued in 1887 to the Elis by the Harvard Cricket Association through The Crimson, the Bulldogs finally accepted. And for a moment, the cricket team—one of Harvard’s 66 student-run club sports teams—could claim that it would play in its own edition of “The Game.”

According to a survey of the freshman Class of 2017 conducted by The Crimson, 69 percent of incoming students who responded reported that they played a sport in high school. However, less than 13 percent of respondents said that they had been recruited for one of Harvard’s 42 varsity teams.

For the sizable portion of high school athletes who were not recruited, club sports offer a chance to remain involved in athletic pursuits without requiring the same level of commitment that is necessary at the varsity level.

Harvard’s club teams operate with fewer resources—be it time, money, or personnel—than varsity programs do. Nonetheless, they sometimes represent the College at competitions where regional, conference, and even national championships are on the line.

The Harvard Cricket Club advanced to the national tournament this year after posting one of its best seasons in modern program history, dropping just one game during the regular season and defeating the defending Ivy League champion, Penn, in a closely contested title game.

In the tournament, the team was ousted after receiving a difficult draw in the round robin stage against opponents that would eventually finish first and third. Through the season, however, the club was ranked as high as third in the country and saw two players, sophomore Vivek Jayaram and junior captain Manik Kuchroo, earn All-American honors.

The team enjoys its club status, but operating logistics has spawned the team’s desire to transition to a varsity sport.

“We [think we] are on a path to go varsity in the next couple of years,” Kuchroo said. “[I am] not entirely sure when it will happen but hopefully in the next decade or two…. [Club status] doesn’t really hinder the club—just more control is given to the students.”

The junior believes switching to varsity, should it happen, would lead to the disappearance of some of the challenges he says his team regularly faces.

“Access to field space is a huge thing,” Jayaram said. “During the winter, our practice time in the bubble is 9 p.m. to 12 midnight on Friday nights. It is hard to expand the club memberships when only the most dedicated players would give up their Friday nights to play.” 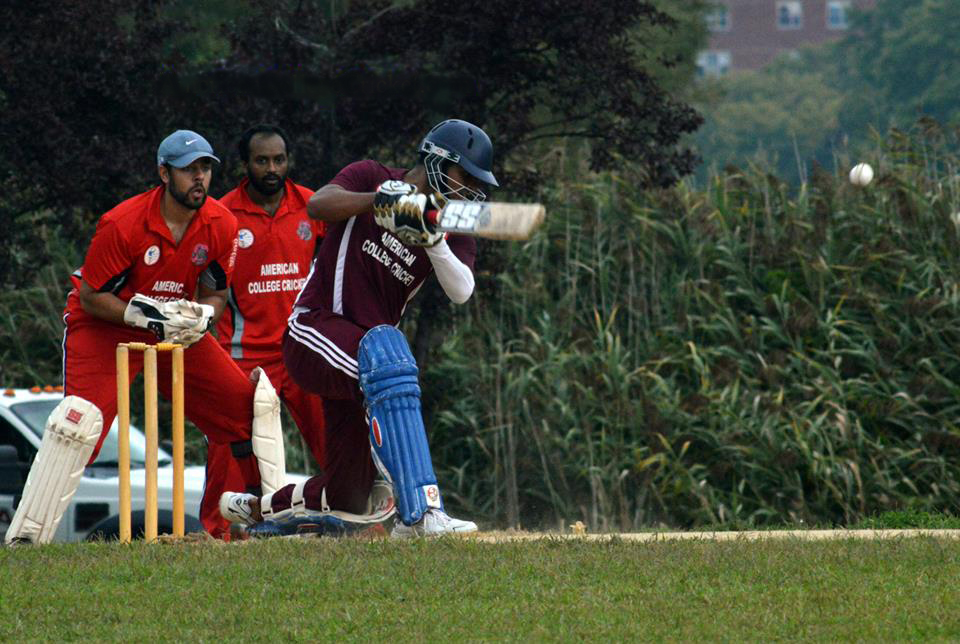 Another team that has retained its club status for over a century is the Harvard Rugby Football Club, which was founded in 1872 and claims to be the oldest of its kind in the United States. In 1874, the team competed against McGill University in the first rugby game ever to be played and documented in America, kickstarting a legacy of high-level competition.

While the women’s rugby team just completed its second year as a varsity team, the men’s team has remained a club. Differences now exist between the teams in the quality of training and the financial resources possessed, but the men’s team still receives some support from the Athletic Department as a club.

Today, the male ruggers train approximately twice a week, depending on the season, with near-weekly games during the fall season and intermittent competition in the spring. Many students who join the team have played either rugby or football before, but plenty of others have not.

While members of the men’s rugby team sometimes have prior experience, that is almost never the case for one of Harvard’s newer club sports—quidditch. Based on the sport from the Harry Potter series, quidditch recently has grown popular on a number of college campuses, including Harvard’s.

The Harvard Horntails compete with teams from both the surrounding area and further afield. The team was founded in 2009, becoming Harvard’s first co-ed contact sport—a mix of rugby, dodgeball, and handball.

“People tend to not start playing until they get to college,” sophomore manager Cassie Lowell said. “If they have played quidditch before then, it’s very rare, unless it’s just throwing around a broom and a ball.”

Despite the paucity of experienced quidditch players, the team has already taken steps forward in competition. The Horntails recently switched to a more competitive league, the Massachusetts Quidditch Conference, and they recorded two victories at this year’s U.S. Quidditch World Cup in April.

As members commit increased amounts of time and energy to quidditch, one new issue has had much to do with travel. The Horntails make the trek to two tournaments a year, including the World Cup, which was held this year in South Carolina.

“Just the travel expenses to take 20 people to those places [are] enormous,” sophomore captain Zac Bathen said. “That’s where we see most of our budget problems. As more and more clubs become club sports, and club sports emerge, everyone gets less money, and we’ve definitely felt that.” 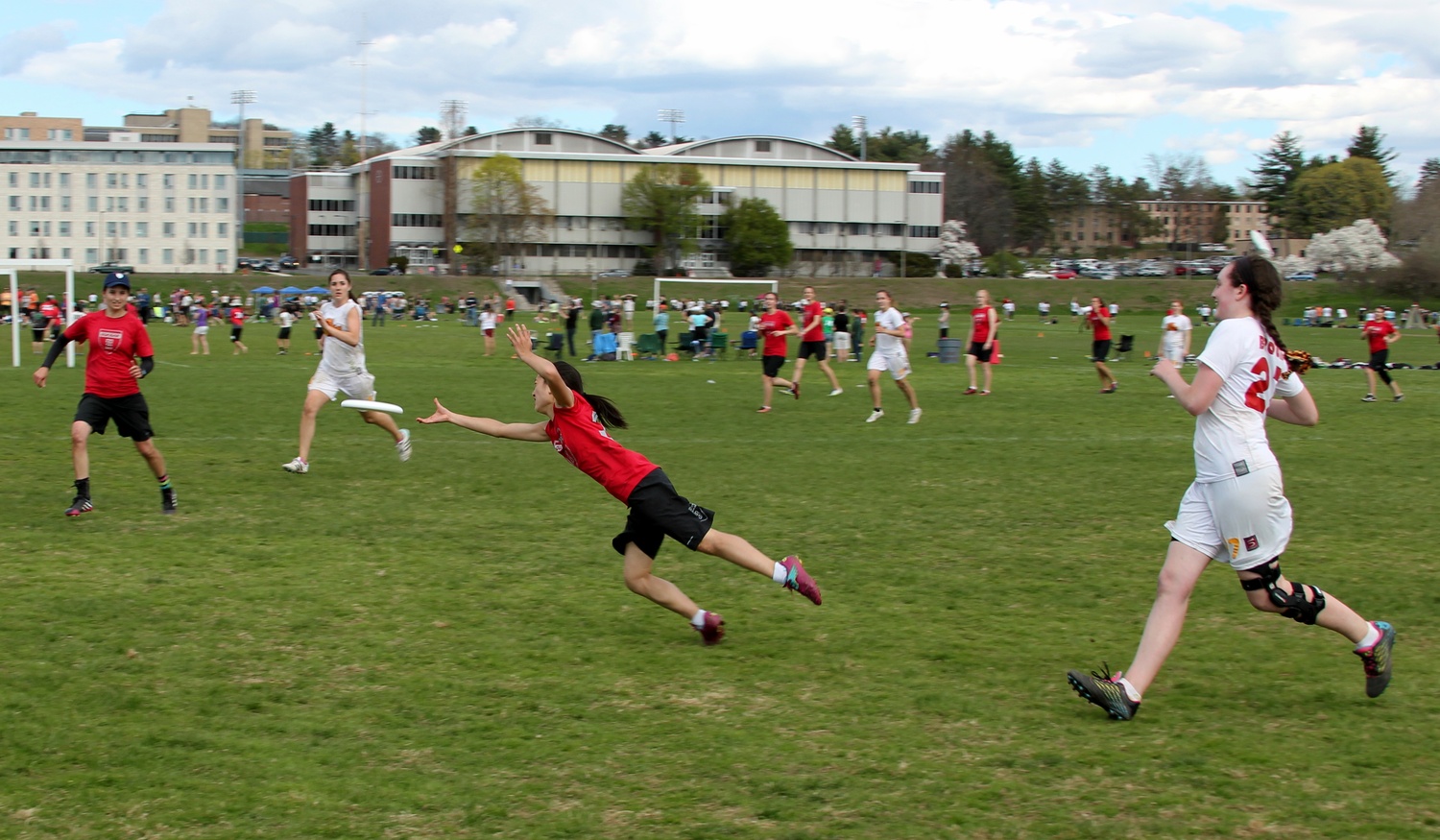 Despite the success which the team has experienced, being a club sport has brought financial limitation on the squad, affecting the ability for Quasar to be successful at a national level. By Courtesy of Claire Houlihan

The Horntails aren’t the only club sport to feel the burden of funding sometimes costly travel. Red Line and Quasar, the men’s and women’s ultimate frisbee teams, respectively, have both played in the regional tournament in recent years, and have aspirations to compete in the national championship.

“Over the past three or four years, the program has been on the rise,” Quasar captain India Stubbs said. “[The program is] building in size, strength, and national rank, [and] I believe that the team is in a great spot to keep improving and become even more competitive next year.”

In order to satisfy their ambitions, Stubbs stressed, the team has to travel across the country for tournaments. The men’s team has adapted by starting an endowment intended to help lower the costs of competition.

“I think that ultimate in particular relies more on money in order to grow as a program and to compete at a higher level,” Stubbs said, “which I know is a challenge for both the men’s and the women’s teams.”

With so many club sports offered at Harvard, it is inevitable that teams will face these kinds of challenges that their varsity counterparts typically avoid. But despite the difficulties, through competition and sense of community, club sports constitute a vital aspect of Harvard student life.

—Staff writer J. Kevin Qualey can be reached at kqualey@college.harvard.edu.