Male Rookie of the Year: Dershwitz To Pursue Olympic Dreams 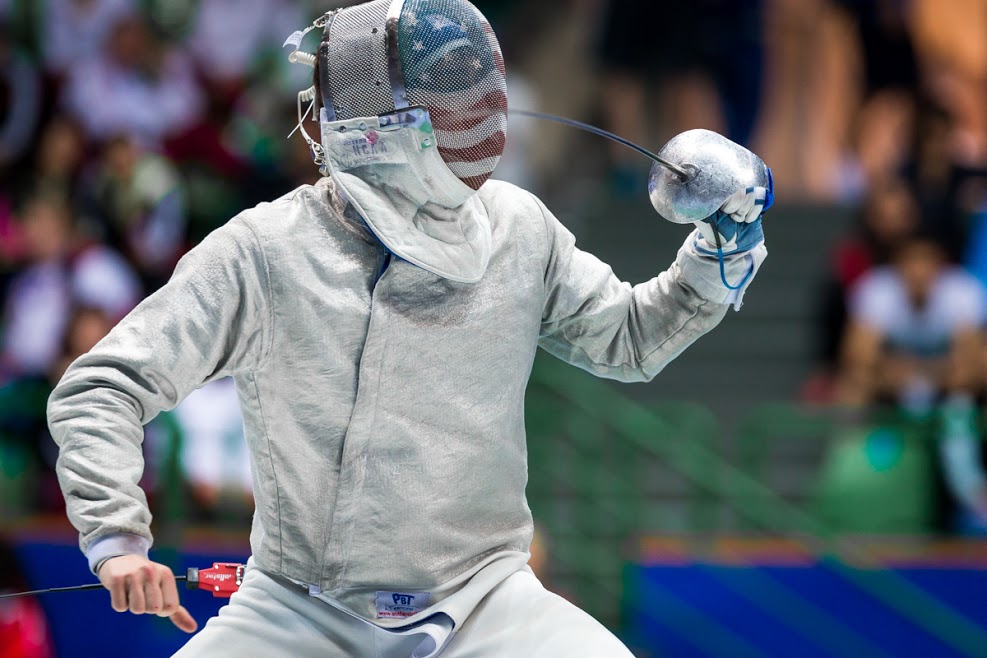 Harvard freshman Eli Dershwitz, pictured above in action in early April at the Junior World Championships held in Tashkent, Uzbekistan, will be taking a year off from his studies to pursue a spot on the US Olympic team. By Courtesy of Devin Manky Photography
By Caleb Lee, Crimson Staff Writer

For some athletes, collegiate competition is not enough.

Freshman sabre fencer Eli Dershwitz came to Harvard with the full knowledge that he would be taking a break from the team after his freshman season. And while competing for the Harvard team has presented a unique set of challenges and opportunities for Dershwitz, who faced defeat at the NCAA championships, the year has served as another stepping stone towards an even bigger goal—making the U.S. Olympic fencing team.

“We knew when we recruited him that this was the plan,” Harvard coach Peter Brand said. “He was very upfront about this, [and he] has a great chance of making the U.S. Olympic team. He fought like crazy for us this year...and he was an amazing performer, not only for himself, but also for the entire team.”

Now in the middle of an Olympic qualifying journey, Dershwitz ranks third in USA Fencing’s national rolling points standings for senior men’s sabre, behind 2012 Olympic team members Daryl Homer and Jeff Spear. Only two individuals per country in the sabre weapon will be able to qualify for the 2016 Summer Olympics in Rio de Janeiro, Brazil; Dershwitz will take a leave from Harvard over the next year to train and fight for one of those spots.

But with the qualification process not coming to a close until April 2016, Dershwitz and his direct competition still have a long way to go on the road to the Games.

While some Harvard students take a year off before college and others take time off in the middle of their educational careers, Dershwitz arrived at the College already intending to leave after his freshman season to pursue his Olympic aspirations. Even though he did enjoy considerable success fencing at the collegiate level this year, his ultimate focus did not change. 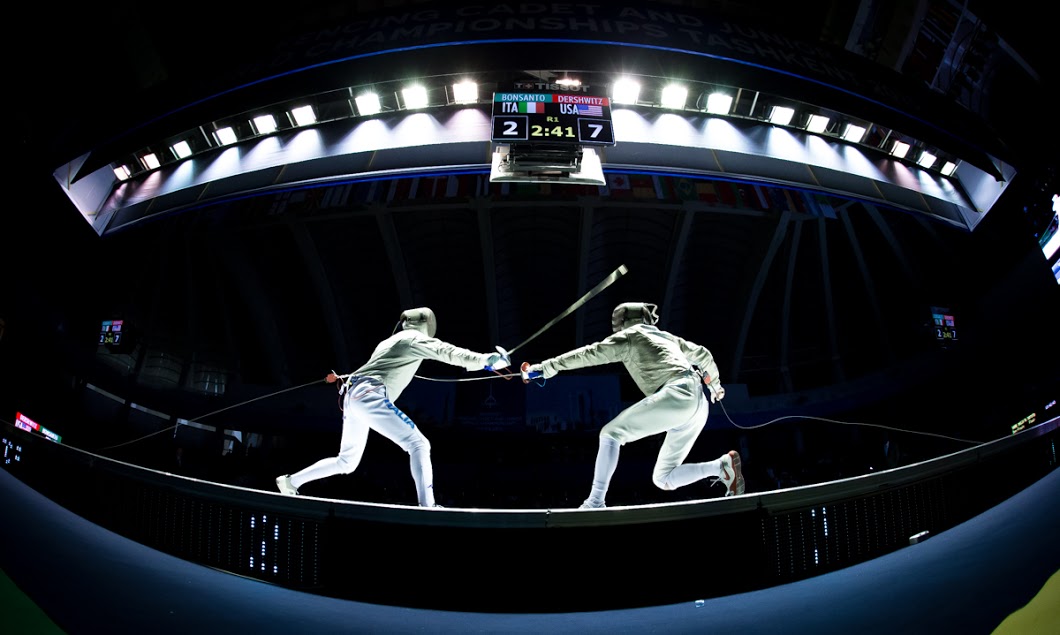 Dershwitz competes against Italy's Francesco Bonsanto at the Junior World Championships in Tashkent, Uzbekistan, on April 7. By Courtesy of Devin Manky Photography

“I’ve had the same goal in mind really for a long time now,” Dershwitz said. “It’s been quite a few years since I realized that I had the potential to reach a certain level of athletic ability…. I think that taking a year off next year and training is an opportunity that I can’t pass up.”

While most sports at Harvard rarely see first-year athletes rise to national prominence so quickly, the fencing team has bucked that trend. Before Dershwitz, there was Adrienne Jarocki, who marched her way through the NCAA championships in 2014 to win the individual title in the sabre.

Dershwitz initially took a similar path as Jarocki did at the NCAA championships, finishing with 22 victories in pool play to qualify as the top seed in the final four, but his season would end in disappointment. Fourth-seeded Ferenc Valkai of St. John’s University, whom Dershwitz had defeated previously in pool play, took advantage of the Harvard fencer’s mistakes to win by a 15-11 score.

Dershwitz made it to the podium with bronze, finishing the year with an 84-14 record and a plus-234 touch differential. He also went 15-0 at the Ivy League Round Robins to propel the Crimson to a share of the Ivy League title.

“It’s incredible to train with a guy like him; he’s so knowledgeable about the sport,” junior co-captain Duncan O’Brien said. “I’m the team captain, but I’ll be looking at him [to see] how I can be doing better as a fencer, how we can train differently, [and] what needs to be done.”

His first season may appear impressive in isolation, but in the context of Dershwitz’s international career, it represents just another pin on the lapel. He has already been decorated dozens of times on the world stage, once after a recent gold medal-winning performance at the first Olympic qualifying event in Santiago, Chile. There, Dershwitz defeated both Homer and Spear to claim the title for the second consecutive year.

To qualify as an individual to represent the Stars and Stripes at the 2016 Summer Olympics, Dershwitz will have to surpass Homer or Spear in the rankings to become one of the top two fencers in America. Otherwise, he will have to finish among the top 14 fencers in the International Fencing Federation’s adjusted rankings to achieve his dream.

According to Brand, only one other American Crimson fencer has qualified as a starter for the Olympic Games in the modern era—Emily Cross, who won a silver medal as a part of the U.S. Olympic women’s foil team at the 2008 Games in Athens, Greece. 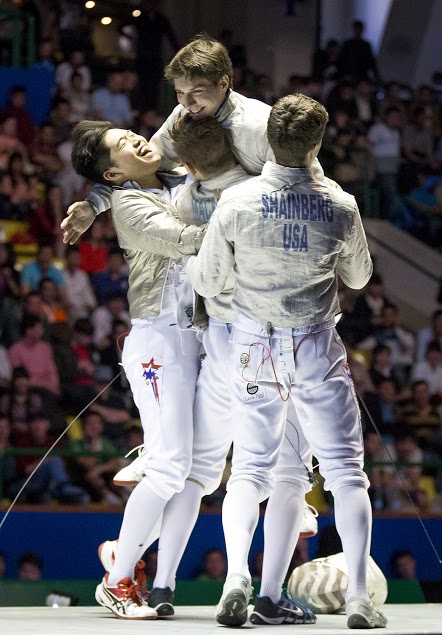 Dershwitz and his American teammates celebrate Dershwitz's victory at the Junior World Championships in Tashkent, Uzbekistan. By Courtesy of Devin Manky Photography

“I don’t think the odds of me making the team is the best way to put it,” Dershwitz said. “At the level I’m at now, I feel like if I’m able to focus on my goal, I have the ability to put myself in a really good place for qualifying for the team.”

Brand normally tells his fencers to be patient and fence their collegiate careers before embarking on an Olympic run post-graduation. But there are some exceptions.

“It’s very difficult to take a year off,” Brand said. “Unless you’re ranked in the top three already nationally; [then] that makes sense. Eli is ranked third currently, so that makes sense.”

TALENTED BEYOND HIS YEARS

Though Dershwitz has only fenced for the Crimson for a year, the sabre specialist has impressed coaches and teammates alike with his poise on and off the strip. As his teammate at both the private fencing club Zeta and at Harvard, O’Brien has observed Dershwitz’s abilities since their youth.

“I’ve fenced with him since I was in seventh grade and he was in fifth grade, so I’ve seen that it’s been a long process from him just being a little kid to moving up in the ranks,” O’Brien said. “I remember in high school, he’d come an hour early to every practice to practice basic technique, basic footwork—the stuff that most people will just practice 10 or 15 minutes on during practice—[but] he’ll spend hours on it outside [of practice].”

Though Brand may be deprived of his best men’s sabre fencer next year, he is fully behind Dershwitz’s aspirations.

“He’s extremely mature, very caring about his teammates,” Brand said. “He’s a team player who came in and gave us everything he had. To that extent, I’m very happy for him, and absolutely supportive of him taking the year off next year.”

Dershwitz primarily competes on the senior circuit now; having been born in 1995, he is among the youngest fencers at the top of the U.S. leaderboard. Homer and Spear, who rank first and second, were born in 1990 and 1988, respectively.

Though both Homer and Spear have already competed for the U.S. Olympic team, what they do not have is a current college student’s perspective, something that Dershwitz believes is to his advantage. 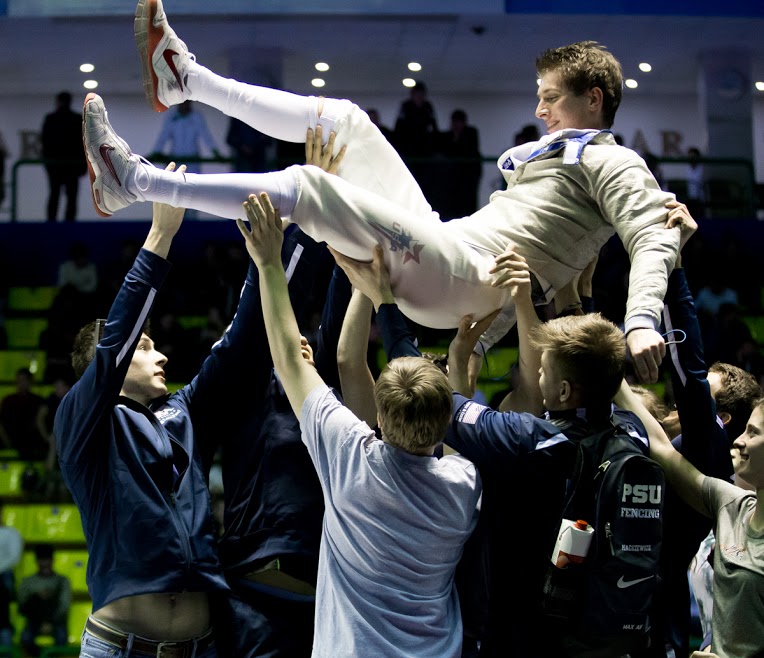 Dershwitz seen celebrating at the 2015 Junior World Championships in Tashkent, Uzbekistan, will represent the US in the men's individual sabre. The Crimson fencer is ranked 12th in the world and is the top-ranked American. By Courtesy of Devin Manky Photography
Advertisement

“I think the fact that I’m a part of [the Harvard] team and also in school gives me a unique perspective,” Dershwitz said. “I feel like I really take advantage of my time and am able to focus very well on the drills at hand or the practice at hand…. I really feel that I’m able to take advantage of every practice, every lift and use it to my advantage at the spot where I am now.”

After coming to Harvard on visits and seeing the team in action, Dershwitz found a supportive cast of characters on campus.

“I really feel that the family aspect that we have [on the Harvard team] is a great attraction,” Dershwitz said. “That’s one of the big things that led me to pick Harvard over other schools—[that] family feel.”

Just as he left the comfort of home to come to Harvard, Dershwitz will have to leave the Crimson temporarily as he strives for greater achievements. With international qualifying events flying him across the world, Harvard will have to wait.