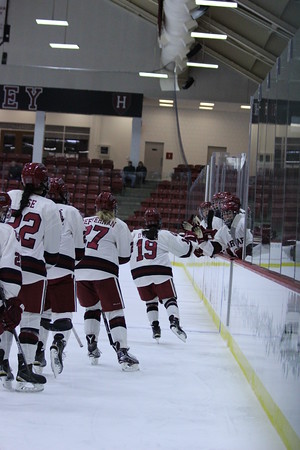 With the chance to improve in the ECAC standings at stake, the Crimson dropped two conference matchups against St. Lawrence and Clarkson. By Thomas W. Franck
By Julio Fierro, Crimson Staff Writer

Looking to build a new winning streak and stay on pace with ECAC leaders Quinnipiac and Princeton, the No.8/9 Harvard women’s ice hockey team (10-6-1, 7-5-1 ECAC) left the confines of Bright-Landry this weekend to take on conference foes St. Lawrence and No. 5/5 Clarkson.

With the game tied going into the final stanza, the Crimson looked to regain the lead after losing it twice earlier. Just over six minutes later, however, Harvard found itself down as junior Corie Jacobson’s shot found twine.

The blueliner’s goal opened the floodgates for the Golden Knights, as senior Olivia Howe doubled the Clarkson lead two minutes later before classmate Renata Fast found a streaking Genevieve Bannon down the right flank, who slipped a shot past Harvard co-captain Emerance Maschmeyer with two minutes left to put the game away, 5-2. The loss marked the fifth straight game against Clarkson without a win for the Crimson.

The Golden Knight defense, which claims the second ranked scoring defense in the conference, held the Crimson offense in check for most of the game. Despite allowing two goals in the first period, Clarkson held Harvard to a mere 19 shots, and only three in the last frame.

The Crimson took the lead early, as sophomore Chelsea Ziadie’s shot from the point bounced off the pads of Clarkson goaltender Shea Tiley. Classmate Lexie Laing quickly redirected the puck into the back of the net to give Harvard the lead.

After pressuring the Crimson goal for almost five minutes, the Golden Knights evened the score as rookie Loren Gabel’s wrist shot from the slot made its way past Maschmeyer, who made 28 saves on the night.

Despite being outshout 11-5 in the first frame, it was Harvard who tallied its second goal of the period as freshman Grace Zarzecki’s scored her eighth goal of the season from the right side.

A back-and-forth second period saw Clarkson even the score once again, as rookie Rhyen McGill redirected a shot from teammate Savannah Harmon into the net. The Crimson failed to take advantage of multiple opportunities in the frame, as the Golden Knights killed the three penalties. With the loss, Harvard slipped to fifth in the ECAC standings.

A pair of first period goals was all St. Lawrence needed to pull off the upset over the Crimson, 2-0, as Harvard was shutout for just the second time all season.

The scoring for the Saints got off to a peculiar start as rookie Lydia Grauer’s slapshot was redirected off the back of sophomore Amanda McClure, leaving Maschmeyer stranded as the puck crept into the net.

St. Lawrence doubled its lead just nine minutes later, as the Crimson failed to kill the power play following a hooking penalty on junior defender Natasha Rachlin. Sophomore Hannah Miller fired a slapshot from the left flank that made its way through a crowd of players and squeezed in between Maschmeyer and the near post. The Saints outshot Harvard 13-9 in the first period.

–Staff writer Julio Fierro can be reached at julio.fierro@thecrimson.com