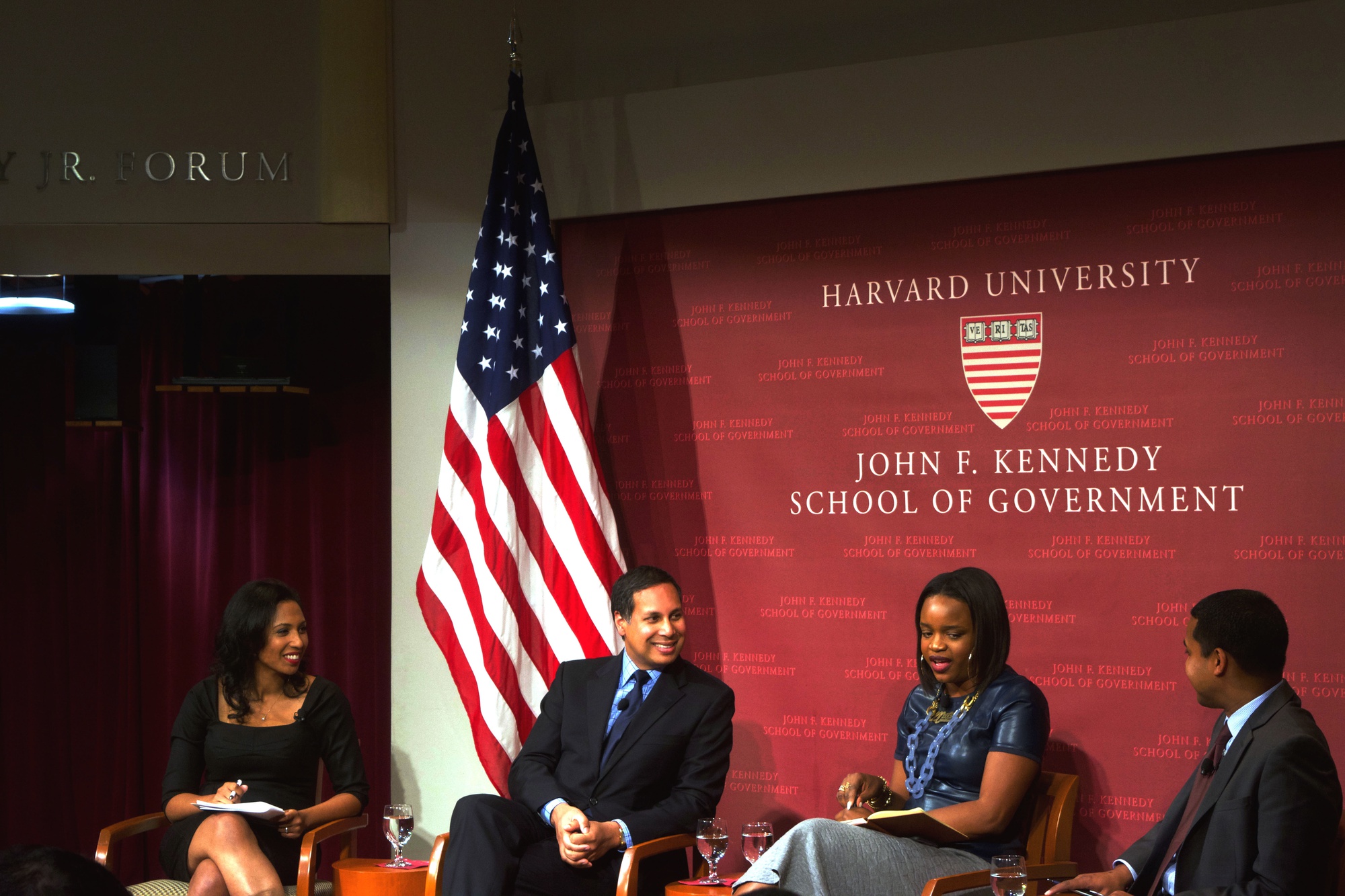 A John F. Kennedy Jr. Forum panel agreed Wednesday that history will be kind to President Barack Obama, though his legacy is still unfurling.

The event, entitled “Race and Justice in the Age of Obama,”kicked off a two-day conference on Obama’s legacy on race and justice issues. 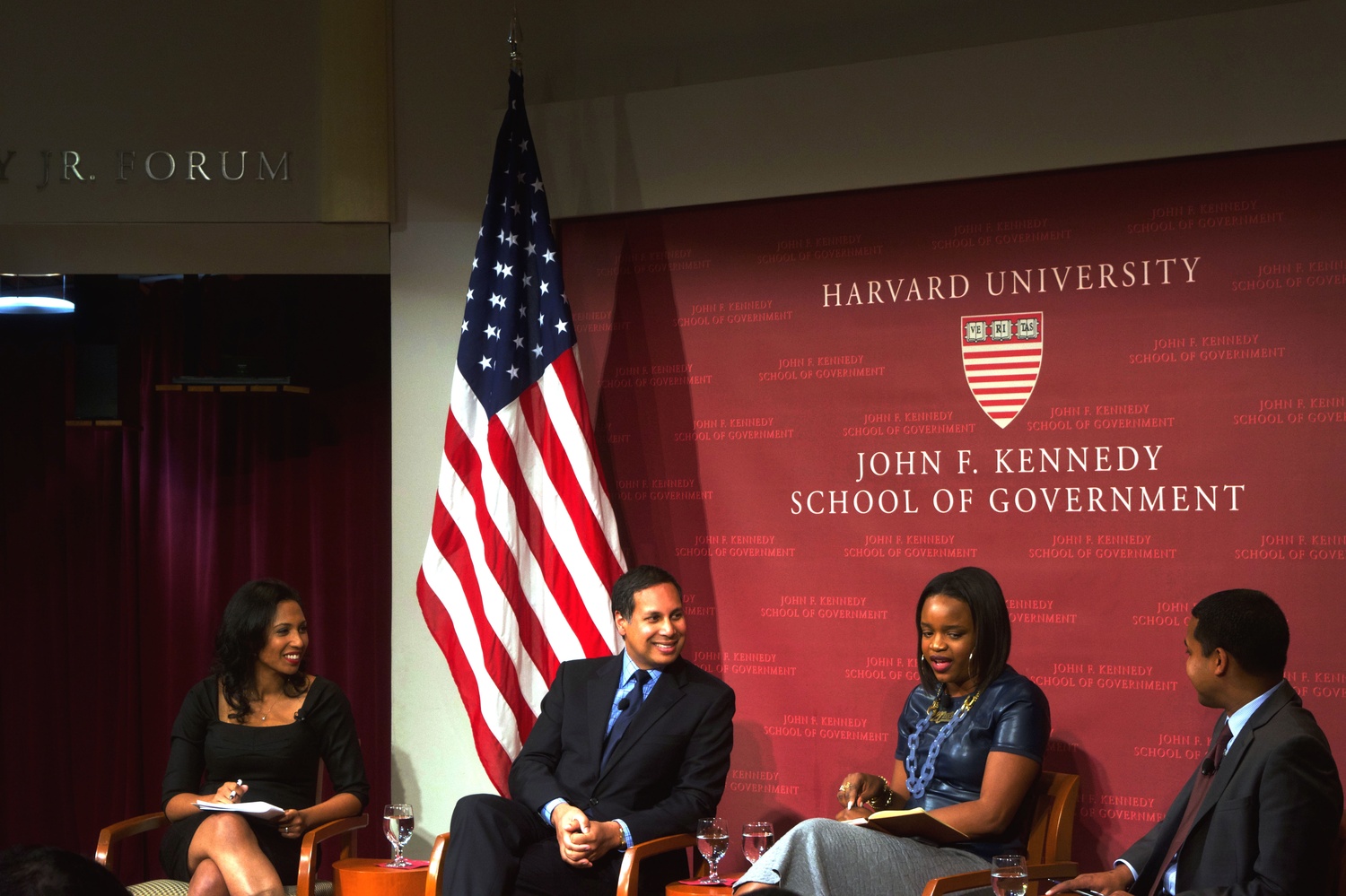 Leah Wright Rigueur moderates a discussion with Avik Roy, Brittany Packnett, and Paul Monteiro about the consequences of Obama’s presidency surrounding race and justice issues in the United States. By Saul A. Urbina-Johanson

The panel’s moderator and assistant professor at the Kennedy School, Leah Wright Rigueur, said it was important that a panel occur right before the election.

“The significance of this moment cannot be overstated. At this critical social and political moment, the Kennedy School has an opportunity and an obligation to use our platform to weigh in on the impact of our nation's first black president,” she said, also emphasizing the need for diverse perspectives.

Dr. Wright said it is important to hold a conversation early on in the examination of Obama’s legacy, despite generally being “squeamish” about assessing presidents’ legacies before they leave office.

“I can also say that there is tremendous value in and tremendous weight in examining Barack Obama’s impact on race and justice, particularly as we consider the future of our nation,” she added.

Avik Roy, president at the Foundation for Research on Equal Opportunity and editor of Forbes Opinion, pointed to a growing income inequality as one shortcoming of the Obama administration, though he expects Obama’s legacy on race to look better with time.

“I think that 20 to 30 years from now, President Obama's legacy is going to look a lot better, even to nonpartisan observers, than it did today on issues of race.”

Obama is someone who has consistently taken the long view and worked towards “turning the ship of state to a place that was more pointed toward justice,” said Paul Monteiro, who has worked with Obama for more than 10 years and now serves as Acting Director of Community Relations Service at U.S. Department of Justice.

Obama will leave a lasting impact on the way America looks at black culture as well, Brittany Packnett, Vice President of National Communities Alliances at Teach for America, stressed.

“There are young people who have only ever known a black President and First Lady, and it’s a cultural representation being sanctioned in a way that has real legitimacy in the American canon,” she said. “It is not just the stuff of black people, but an American treasure.”

Antonio J. Copete, Associate of the Harvard College Observatory, sat in the audience and remarked that the event pushes people to have more honest conversations with each other.

“What I appreciate about it is that it's a conversation that makes us uncomfortable,” he said. “And I think it should, because it’s a difficult topic that people refrain from talking about openly, but everybody knows that it's all around us.”