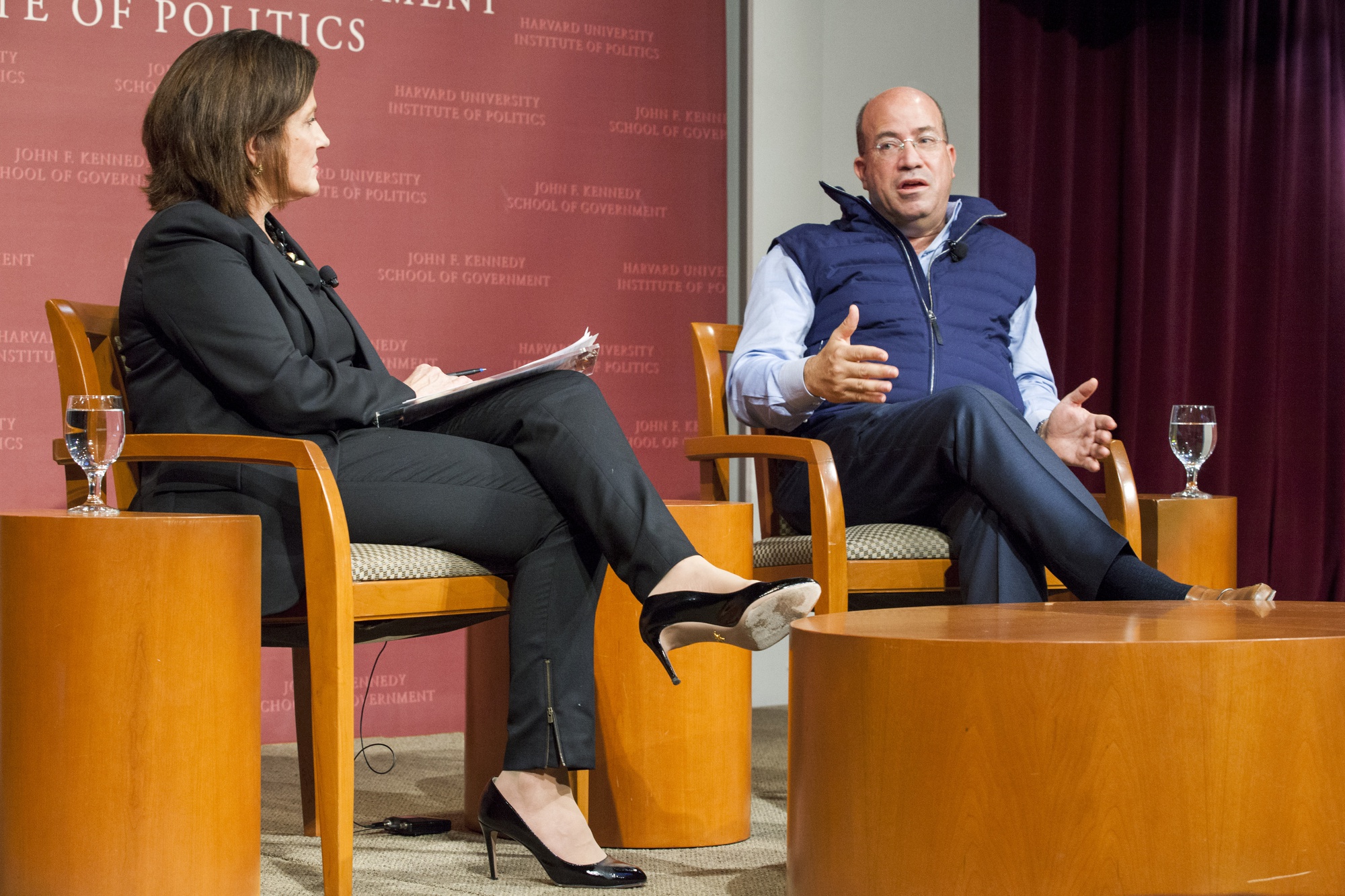 Moderator Lois Romano, a political correspondent for The Washington Post, began the event by discussing Trump, whom she called “the elephant in the room.” She prompted Zucker to address CNN’s role during the election by questioning the network’s decision to devote significant air time to Trump. 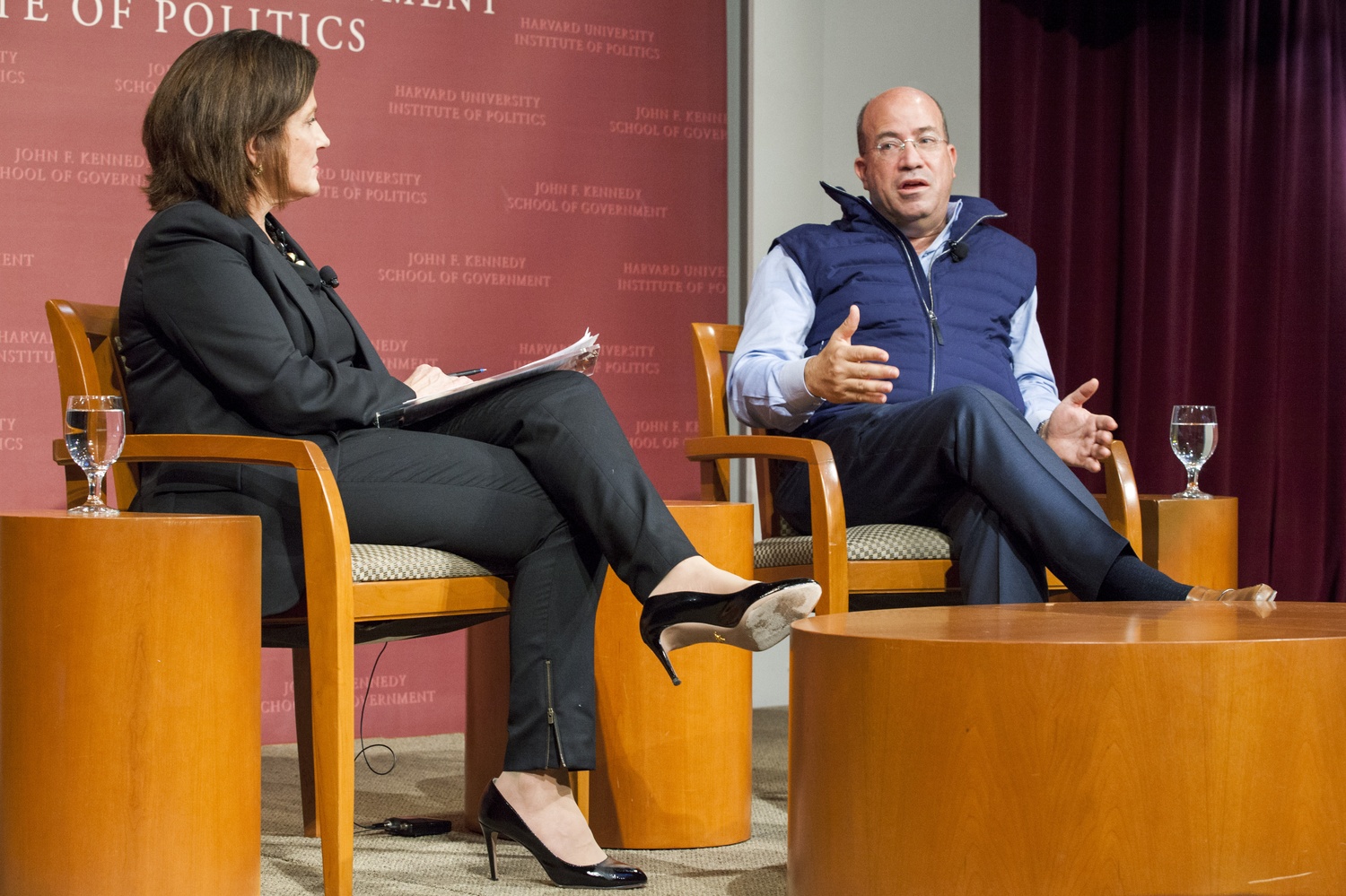 Zucker, a former president of The Crimson, remained adamant that CNN was not responsible for Trump’s nomination as the Republican candidate.

“In his defense and in our defense, when we asked him for an interview, he said yes, and I cannot say that about the other Republicans who were running for president,” Zucker said. “That’s not Donald Trump’s fault, that’s not CNN’s fault.”

He instead praised CNN’s ability to “recognize much earlier than most that there was a bit of a phenomenon to Donald Trump.” As a result, the network gave Trump more coverage during his earlier rallies.

However, Zucker did say that CNN’s choice to devote significant air time to Trump’s earlier rallies may have been a mistake.

“If we made a mistake last year, it’s that we did put on too many of his campaign rallies in the earlier months. You never knew what he was going to say, so there was an attraction in letting it run,” he said.

Before his time at CNN, when Zucker served as the president of NBC Entertainment he greenlit “The Apprentice” and worked directly with Trump.

“The Donald Trump I’ve always known is somebody who’s a publicity magnet, someone who knows how to use the media. He loved to brag about his ratings, and he knew how to draw attention to himself,” Zucker said.

Zucker denied having any insight into a recently unearthed video from 2005 of Trump, featuring the Republican nominee making lewd comments about women.

“I would say what is out there now, I’m unaware of any of that,” he said. “That was certainly not in the context of the way I knew him.”

Another attendee, Chandler Beyer admired Zucker’s insistence in abstaining from endorsing one of the candidates.

“I really appreciated how he stayed firm on not saying what political candidate he supported,” Beyer said. “I think that really is imperative to staying as unbiased as possible.”

Zucker also outlined the ways in which he believes he has changed CNN’s trajectory for the better as CNN Worldwide president. The three strategies he outlined were “going all in” on the big news stories, creating original series for CNN’s television channel, and investing in the development of its digital platform to grow its millennial viewer base.

“There’s no doubt that traditional news organizations have wanted to chase millennials,” he said. “We are the number one source of news information of any digital platform in the world.”

During the conversation, Romano brought up a previous comment Zucker made about Buzzfeed, another popular digital platform, in which he called Buzzfeed not a “legitimate news organization.” She pointed out that he recently hired their political investigatory research team.

Before joining CNN as its president in 2013, Zucker spent 25 years at NBC Universal, where he served as the Entertainment President from 2000 to 2004 before becoming the CEO in 2007.

When an audience member asked Zucker to look back at how his time at Harvard shaped where he is now, Zucker said being the former president of The Crimson gave him a “tremendous foundation for journalism.”