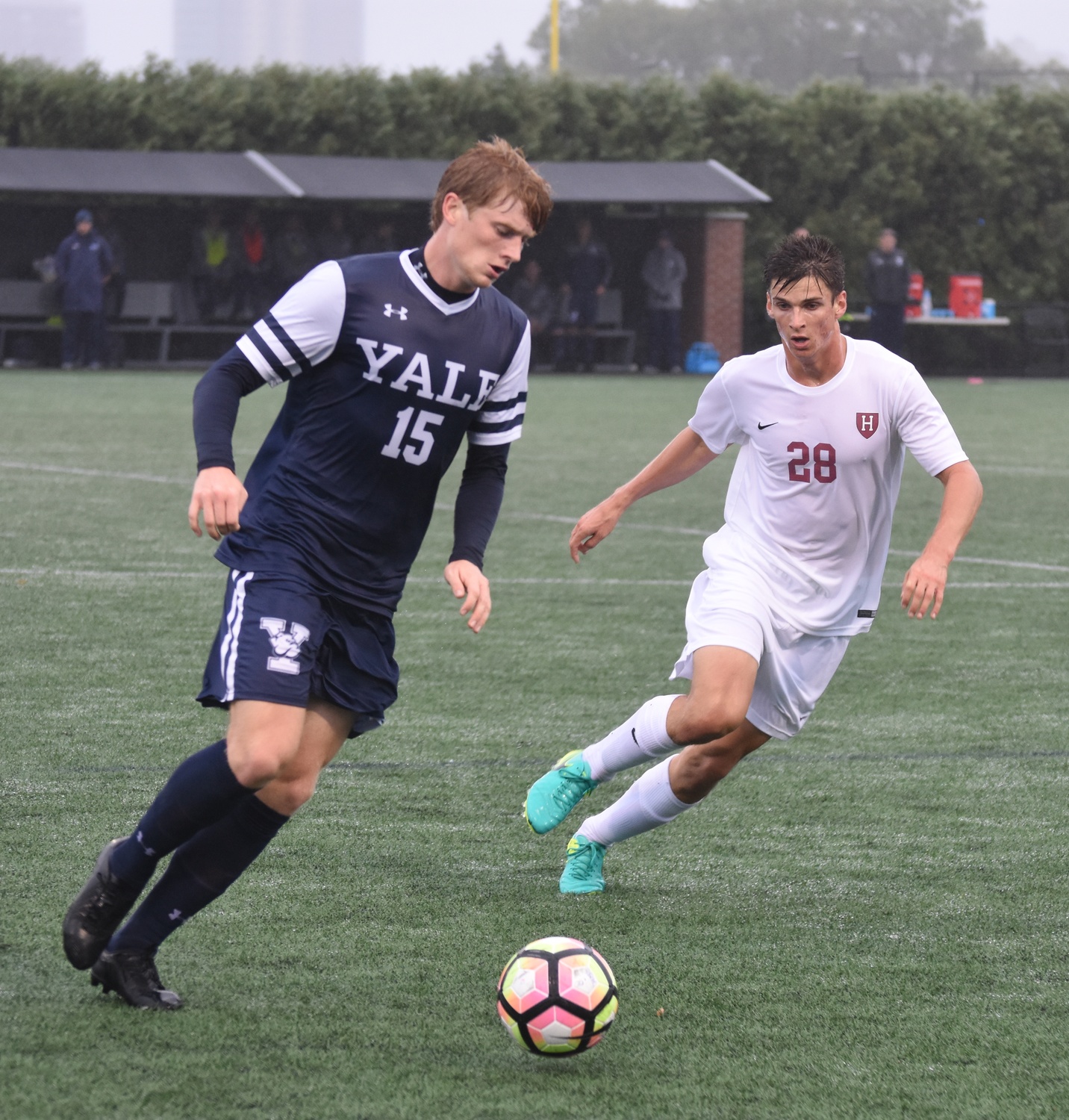 Junior defenseman Eric Gylling’s double-overtime winner lifted the Crimson to its ninth win of the season on Tuesday. Gylling, shown in previous action, now has three goals on the year, all game-winners. By Jazil Waris
By Katherine H. Scott, Crimson Staff Writer

“We really stuck it out,” junior goalie Kyle Parks said. “New Hampshire’s a really good team. We stuck to our game plan and got the result we wanted.”

After the two teams were even at one following the first 90 minutes, the opening half of overtime and much of the second were scoreless, with both teams unable to break through the other’s defense. Then, with 4:27 left in the final frame, junior midfielder Sam Brown found himself taking a corner kick for the Crimson.

UNH goalie Andrew Pesci was able to bat the ball away, but not to one of his own players—to Gylling. Gylling then beat Pesci for his third goal of the season, giving the Crimson (9-3-2, 3-0-1 Ivy) a win in its final nonconference tilt of the year. All three of Gylling’s goals this year have been game-winners.

Back in the first half, both sides were well matched, with neither side allowing more than a couple of shots. Harvard’s sophomore forward Cesar Farias did manage to get a shot off in the first five minutes of the game—and one might have judged from the past couple of games where the team would kick into high gear early on, that it would be the same case in this game.

But UNH (11-5, 3-2 America East) doubled down on defense after this first shot by Harvard, and the Crimson would not take a shot for another 15 minutes. Yet while the offense was unable to make anything happen in the first half, the defense made sure to shut down any possible chance that the Wildcats might have had. Both teams registered just two shots in the first half.

“I think we did a fantastic job defensively,” Parks said.

Meanwhile, on the offensive end, the Crimson remained positive.

“We know what we do well, and we fall back on that,” senior defender Alex Leondis said. “Even though we’re not getting a lot of shots in the first half, we’re not going to change the way we play. We have confidence and we were able to play and perform. We just stuck with that, and we didn’t really panic, and I think that helped settle us in the second half.”

It was in the second half that the Crimson stepped up its offense to find new ways to get into the attacking third. UNH earned the first chances of the frame, but the Crimson got onto the scoreboard first.

After driving down the field in the 59th minute, Harvard got a corner kick. Brown drove the ball to the far post, where senior defender Daniel Smith was waiting. Smith, with a clean look and an opportunity to get a shot off, headed the ball and scored the opening goal of the game and his second of the season.

Any relief the Crimson felt at finally scoring, however, was quickly dampened three minutes later when UNH’s Chris Wingate scored his fourth goal of the season on a one-timer after receiving a pass from teammate Lalaina Randriamanantena.

The ball would not find the back of the net for another 40 minutes, as the contest continued on into overtime, but Gylling’s winner now has the Crimson six games above .500 with three conference games remaining in the 2016 campaign.

“I think it was a good game, I think both teams played very well overall,” Leondis said. “We just fought a battle the entire game and I was really impressed by our constant mentality and energy we brought and luckily that continued into overtime. It was a tough fought match so it was good to walk away with a win.”