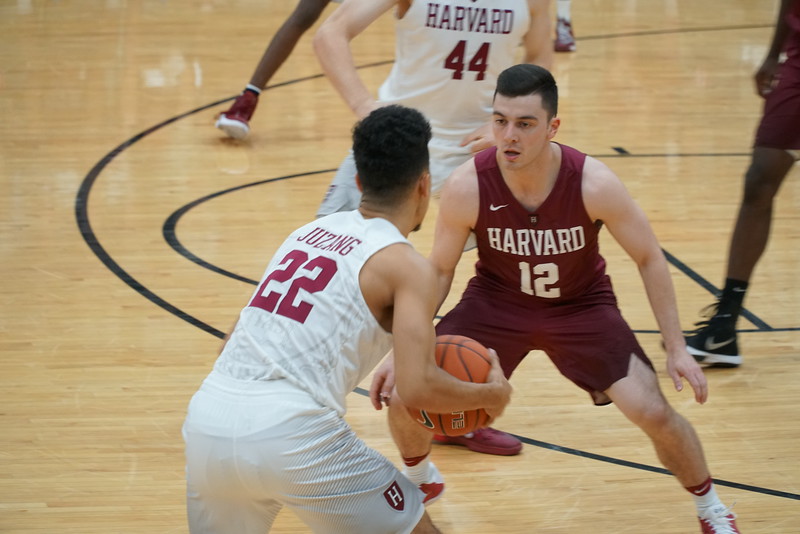 After an ACL injury sidelined him last season. the senior will return to the court in hopes of ending his career with an Ivy League championship.
By David Freed, Crimson Staff Writer

As the Crimson prepares to take on Stanford in its season opener, David Freed recaps the last season for each of the players on this year’s team and discusses the important season goals for each student-athlete. In this article, he discusses the recent progression and the relevant next steps for senior point guard Matt Fraschilla.

After an ACL injury sidelined him last season. the senior will return to the court in hopes of ending his career with an Ivy League championship. By Ryosuke Takashima

When Chambers went down with an ACL injury before the season started, Fraschilla was the main expected beneficiary. The only other non-freshman point guard on the roster, then-junior Corbin Miller, had not shown enough the year before to be the clear-cut starter and was better playing off the ball. Fraschilla thus appeared to be in line for, if not a starting job, significant minutes in his junior season in Cambridge. The start was rosy: Fraschilla earned a Her Campus profile in September and played well in early-season scrimmages.

Things went downhill quickly, however. Tommy McCarthy secured the starting job and in the second game of the season, Fraschilla tore his ACL against Providence. His season was over after 17 minutes and Miller quickly became the primary backup for the remainder of the season. A great opportunity vanished as quickly as it had appeared.

In his 77 career minutes, Fraschilla has shown a rather conventional game. He doesn't have much confidence in his jump shot—having not taken a three since his freshman year—and aims to beat his opponents off the dribble. He is a deft passer when he gets in the lane, but lacks the length (he is just 5'11") to finish effectively over bigger defenders. As he focuses on next season, his goals should be twofold:

1.Embrace Finishing Through Contact — For smaller guards, a key to finishing effectively around the rim is to use the length of big men against them, driving into the body and preventing them from leaning in to block the shot. Since becoming an ace shooter over a summer is unrealistic, Fraschilla should focus on further developing his strengths.

2.Master the Pick-and-Roll — Harvard ran relatively few pick-and-rolls in 2015-2016, but could maximize the athleticism and finishing ability of senior Zena Edosomwan by finding him an effective pick-and-roll point guard. While Chambers is likely to become that player, Fraschilla can provide significant value to the team by mastering the same skill set.

Fraschilla's future with the team is, to put it generously, uncertain. His main comparative advantage last season was his veteran leadership, as his on-court skills pale in contrast to his competition at the position. With the team's two captains both competing for time at the point, Fraschilla can no longer claim that advantage.

Furthermore, the arrival of Bryce Aiken and (to a lesser extent) Christian Juzang will squeeze what few available minutes exist at the one. In his last season in Cambridge, Chambers played nearly 35 minutes a contest at the position—roughly in line with what he played his first two season. That number will likely go down in 2016-2017 since Amaker has considerably more options at the position, but Chambers will still likely play 30-32 minutes a game. The remaining eight minutes are more likely to go to a combination of McCarthy, Miller, and Aiken than Fraschilla.

Fraschilla's problem is compounded by his inability to shoot the ball effectively. All three of the above guards, who offer value as off-ball cutters and shooters, could conceivably play alongside Chambers in two point-guard lineups. Fraschilla is most effective with the ball in his hands and can't claim the same versatility, which ultimately means that is unlikely that he sees any kind of serious minutes in his final Harvard season.