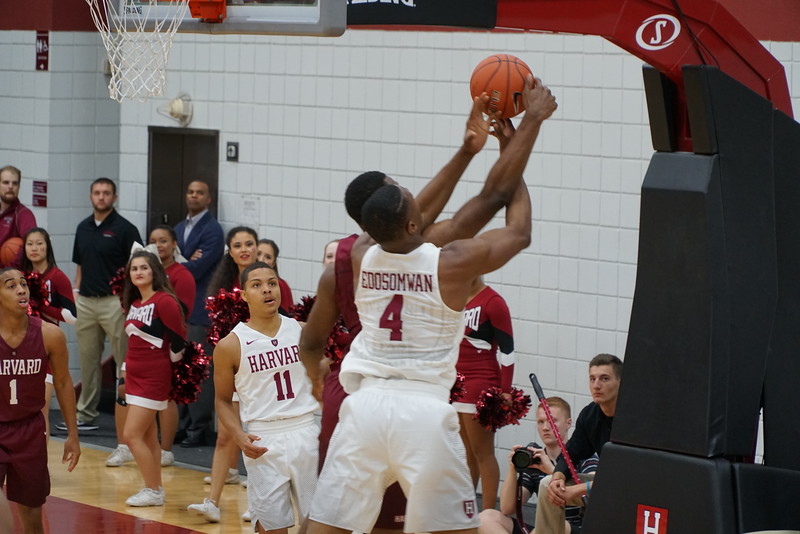 The Crimson's big man in the middle will be looked upon this year as a defensive and offensive powerhouse.
By David Freed, Crimson Staff Writer

As the Crimson prepares to take on Stanford in its season opener, David Freed recaps the last season for each of the players on this year’s team and discusses the important season goals for each student-athlete. In this article, he discusses the recent progression and the relevant next steps for All-Ivy senior center Zena Edosomwan.

The Crimson's big man in the middle will be looked upon this year as a defensive and offensive powerhouse. By Ryosuke Takashima

After Chambers tore his ACL early in the year, the big question for the Crimson was who the offense was going to come from. The team had lost almost all its offense from a year earlier and none of its seniors—Agunwa Okolie, Patrick Steeves, and Evan Cummins—had ever been a featured offensive piece before. Enter Edosomwan. The then-junior spent the entire summer working on his game with four separate coaches and came out as the obvious focal point of the offense.

With great responsibility came great production. Edosomwan rewarded Harvard coach Tommy Amaker for his faith by finishing a couple of rebounds short of a double-double average on the year, throwing in 13.1 points and 9.9 rebounds a game on 50 percent shooting from the field. The obscene became the new normal; after he posted back-to-back 15-rebound games in the season's first week, Edosomwan had double-doubles the next month against two top-five opponents, including a monster 25-point, 16-rebound performance against No. 3 Oklahoma.

As the year went on, Edosomwan cooled down. His putrid free throw shooting (49 percent on the year) became a liability that Ivy League teams mercilessly exploited, hacking him early and often to stop the Crimson offense in its tracks. He was dominant one weekend and absent the next, occasionally pressing too much on the court and showing his frustration by picking up early fouls. He found a healthy balance as the year ended, however, and while he never reached the peaks of the nonconference schedule, he was rewarded with an All-Ivy slot for the first time, making the league's second team.

Edosomwan had arguably the best summer of any Crimson player a year ago, setting the precedent for another large step forward. He has a couple major areas to focus on to take the next step, however:

1.Free Throw Shooting — It's as obvious as it is simple: Edosomwan needs be a far better free throw shooter next year. The senior was taken out of games late out of fear that opponents might foul him, something that he can easily avoid next year by simply hitting 60 percent from the line. The math on intentional fouls looks a lot worse when the expected value of a trip to the line is 1.2 points instead of 1.0 so Edosomwan doesn't have to overhaul his stroke, just improve it.

2.Verticality — Although Agunwa Okolie ‘16 took home the Ivy League Defensive Player of the Year, most advanced statistics saw Edosomwan as the Crimson's most valuable defensive player. Most of this value came from Edosomwan's prodigious rebounding rate, but he can round out his game by becoming a more effective shot blocker on that end.

3.Finishing in the Pick-and-Roll — Amaker ran relatively few pick-and-rolls a year ago, adapting his offense to the skill set of his point guard. With the return of Chambers, however, the pick-and-roll will likely become an offensive staple again. When Chambers and Edosomwan ran it a year ago, the then-sophomore fumbled away pass after pass in traffic. With a summer of focus, that should be an easy area to clean up.

Along with Chambers and sophomore Corey Johnson, you can safely pencil Edosomwan into the starting lineup. While the team has significantly more offensive weapons than a season ago—making it less likely that he get as many post touches as a year ago—he will be the primary post threat in an offense designed around back-to-the-basket play. As a consequence, expect him to be a very active and involved offensive threat.

The introduction of Chambers, as mentioned above, may indicate a shift in his role, however. Edosomwan didn't set many screens last year, something that will change with Chambers running the paint. The senior is arguably the team's most athletic big man and can be a fearsome finisher when given a running start, a position Amaker will attempt to place him in as much as possible.