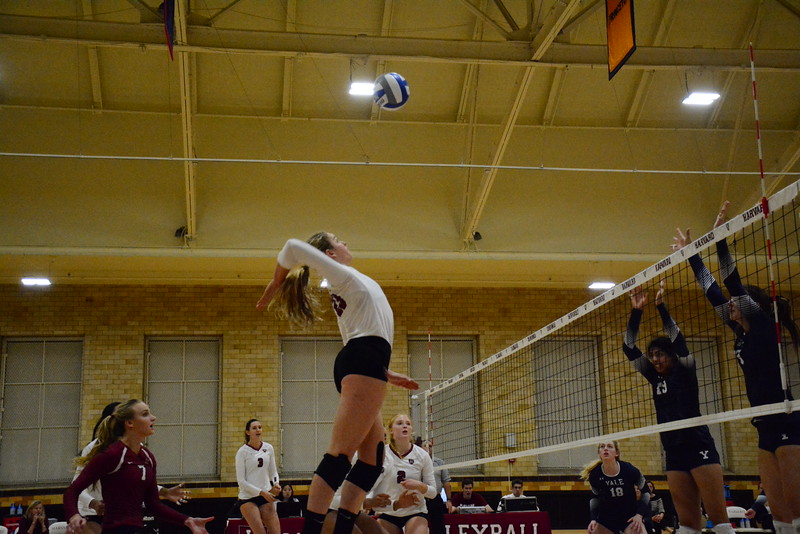 Co-captain Corie Bain ended her career with back-to-back wins in her final weekend, which she capped off with a kill to close out her final set against Brown. By Charles K. Michael
By Kurt T. Bullard, Crimson Staff Writer

Star athletes are supposed to ride off into the sunset on top. We long for one last memory that represents a microcosm of their greatness. We want them to end their careers with an exclamation point, à la Peyton Manning winning the Super Bowl in his final season with the Broncos.

But in collegiate sports, ending one’s career on top is often out of the hands of student-athletes. You commit for four years to a school and have to stick around through the good and the bad. There’s no switching teams or elongating your career for one more year if all doesn't go as planned in your final season. Once your fourth season comes to a close, you just have to hang it up and move on. There’s chance for any ring chasing. It’s over.

Corie Bain is one of the best—if not the singular best—player in the history of Harvard women’s volleyball. Three time unanimous All-Ivy First Team nods, second all-time at Harvard for aces, sixth in assists, sixth in digs per set, to go along with 859 kills—only 74 short of 10th in Harvard history—as a setter primarily.

More important than her stats and accolades, however, were her rings—two of them, to be exact. In the two years that Harvard captured the long-elusive Ivy throne, she was the best player of those teams. Getting a player as talented as Bain to come to Cambridge for four years was a dream come true for Harvard coach Jennifer Weiss and the rest of the coaching staff.

All dreams, however, do not have a fairytale ending. In her final weekend donning Crimson, Harvard was already eliminated from title contention after two consecutive Ancient Eight titles. So, when Corie Bain suited up for her final weekend in the Malkin Athletic Center, there wasn’t much on the line. There was no way for the Crimson to finish higher than fourth place in the conference table. Her legacy as an all-time Harvard great was already cemented.

You wouldn’t have been able to tell that from the way she played, however.

“She brought so much fire and a clear passion for the game,” sophomore Brooke Istvan said. “We were all able to rally around that and play for her.”

In the Yale game, she played the role of facilitator. Trained as a setter, the California native did just that. Bain recorded 38 assists—a conference season-high—including one to sophomore Jocelyn Meyer to close out the fifth and final set against Bulldogs.

The next day, the senior was honored on senior night—which, as the only senior on the team, was effectively Corie Bain night—she led the offensive charge for the Crimson, a role that she had not seriously picked up into college. She registered a team-high 39 total attacks, converting on 14 of those chances. Not only did she notch double-digit kills, but the co-captain notched her eighth triple-double of the season with 23 assists and 14 digs.

For Bain, the rewards from this season won’t be reaped until a few years down the line. As the only senior on the team, her mentorship and leadership on the court shaped the young core of the program going forward so that in the next few years, the Crimson will have a chance to compete for the top spot once again.

“I learned a lot about leadership and finding strength through adversity this season,” Bain said. “It was one of the hardest seasons I had as a volleyball player. We had a lot of obstacles that were out of our control….I think that the most rewarding aspect of it was watching the younger girls learn this program meant to me and what it can give them in their future. I know that they love it, and I see their passion growing for it every day.”

Up 14-10 in the fifth set of Bain’s last collegiate match, Harvard had a chance to put the game away and finish the conference season at .500. After a Crimson serve and a subsequent dig on the Yale attack, Harvard had a chance to end the match. Lined up on the right side, Bain crept up to the net as sophomore Anna Uhr was about to set the ball. It floated in Bain’s direction and, for the last time in her Crimson career, the senior leapt and sent a strike over the net, which the Yale blockers sent out of bounds.

Then, for the last time, Bain pumped her fist, smiled ear-to-ear, and embraced her teammates. She was not leaving Harvard on top of the mountain for the third-straight season, but in that moment, it didn’t matter.

“It’s not always going to go perfect,” Bain said. “If volleyball has taught me anything, that’s absolutely the lesson I’ll take away.”

—Staff writer Kurt Bullard can be reached at kurt.bullard@thecrimson.com.