Their Goal is to Stop Yours 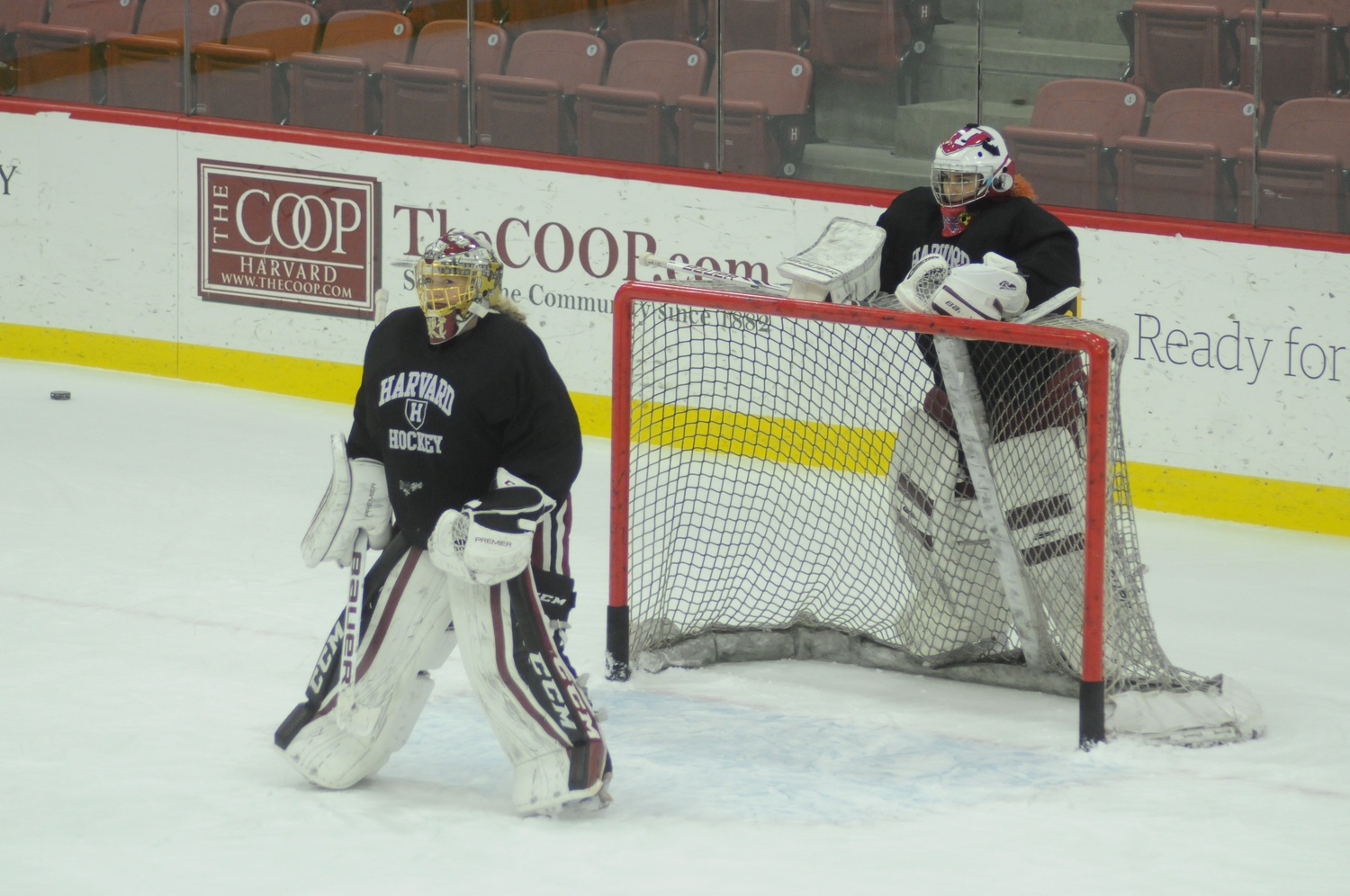 With Emerance Maschmeyer '16 no longer between the sticks for the Crimson, the team will rely on seniors Brianna Laing and Molly Tissenbaum. By Grace Z. Li
By Julio Fierro, Crimson Staff Writer

Athlete turnover is fairly mundane in collegiate athletics. Every year coaches have to deal with graduating players—whether seniors, transfers, or early professional entries—and install new athletes in their places. Sometimes veterans get their first shot in the starting lineup; sometimes rookies make their debut at the college level.

Rarely, however, do coaches have to replace arguably the best player in program history at a certain position.

In the 2016-2017 season, that’s exactly what Harvard women’s hockey coach Katey Stone has to do—deal with the graduation of netminder and former co-captain Emerance Maschmeyer ‘16.

The Bruderheim, Alberta native, who is currently playing for the CWHL’s Calgary Inferno, graduated with a program record 2,583 saves and was constantly considered one of the best goalkeepers in the nation. In particular Maschmeyer has shone at the international level, constantly featuring for her native Canada as a college student, including time as the starting netminder at the IIHF World Championships.

Even so, Stone doesn’t express much worry about having to deal with the departure of Maschmeyer, not to mention all the other players from last year’s graduating class.

“That happens,” Stone said. “That’s the beauty of being in this program. We want to have those kids in our program; it’s awesome when they’re here. Their great habits and discipline become contagious with the young players, and they carry the torch further. Transition is everywhere, and, with it, so is opportunity.”

With Maschmeyer gone, Harvard will look towards a pair of senior goalkeepers in between the pipes. Brianna Laing and Molly Tissenbaum, who shared time backing Maschmeyer over the past few seasons. The two have battled for the starting spot this year, starting at least one game each as Stone experiments with different rotations.

Thus far the two players have posted similar numbers, with Laing allowing five goals in two starts and Tissenbaum allowing four in her lone start. Both goalies let in four scores this past weekend at No. 8/8 Clarkson and No. 6/7 St. Lawrence, demonstrating that they have plenty of work to do in order to fill Maschmeyer’s shoes.

Despite any pressure to perform immediately, both Tissenbaum and Laing will continue to use their battle for the starting position to push each other and get better as the season progresses.

In addition to protecting the Crimson net, Tissenbaum and Laing will also have to step up in terms of mentoring as the team welcomes two rookie goalies to the squad. Freshmen Emily Yue and Beth Larcom likely will not see much playing time this year as Laing and Tissenbaum continue their battle. But the duo figures large in the future of the team.

With no other goalies on the squad, Tissenbaum and Laing will have to pass on their knowledge and experience to Yue and Larcom, making this season all the more vital.

In their three years with the Crimson, Laing and Tissenbaum have seen action in 38 games combined, with 26 of those being starts. This year will likely be the lone season the pair will get extensive playing time and experience, which will be key as the seniors prepare the new generation of goalies for the future.

The two freshman goalies have had plenty of success in their pre-collegiate careers–Yue led her club team to silver and bronze medals at USA Nationals, while Larcom was part of the U18 USA Team that won gold at the IIHF World Championships. But a year of learning will go a long way in preparing the rookies for the rigors of college hockey.

Tissenbaum and Laing believe that they have built a good relationship with the freshmen thus far and are hopeful that the younger players will be ready to shoulder key burdens for the team in later years.

“It’s been fun.” Tissenbaum said. “It’s been kind of cool having the younger kids to teach them how to do what we do and be part of the Harvard hockey program.”

While there is a level of uncertainty at the goalkeeper position that hasn’t existed over the past few seasons, both Tissenbaum and Laing will be counted on to provide some stability and facilitate the transition in their last year donning the Crimson uniform.

Though the task might be daunting, Laing insists that the role remains the same regardless of who is between the sticks.

—Staff writer Julio Fierro can be reached at julio.fierro@thecrimson.com.