Ten-Goal First Half Carries BC Past Women's Lacrosse 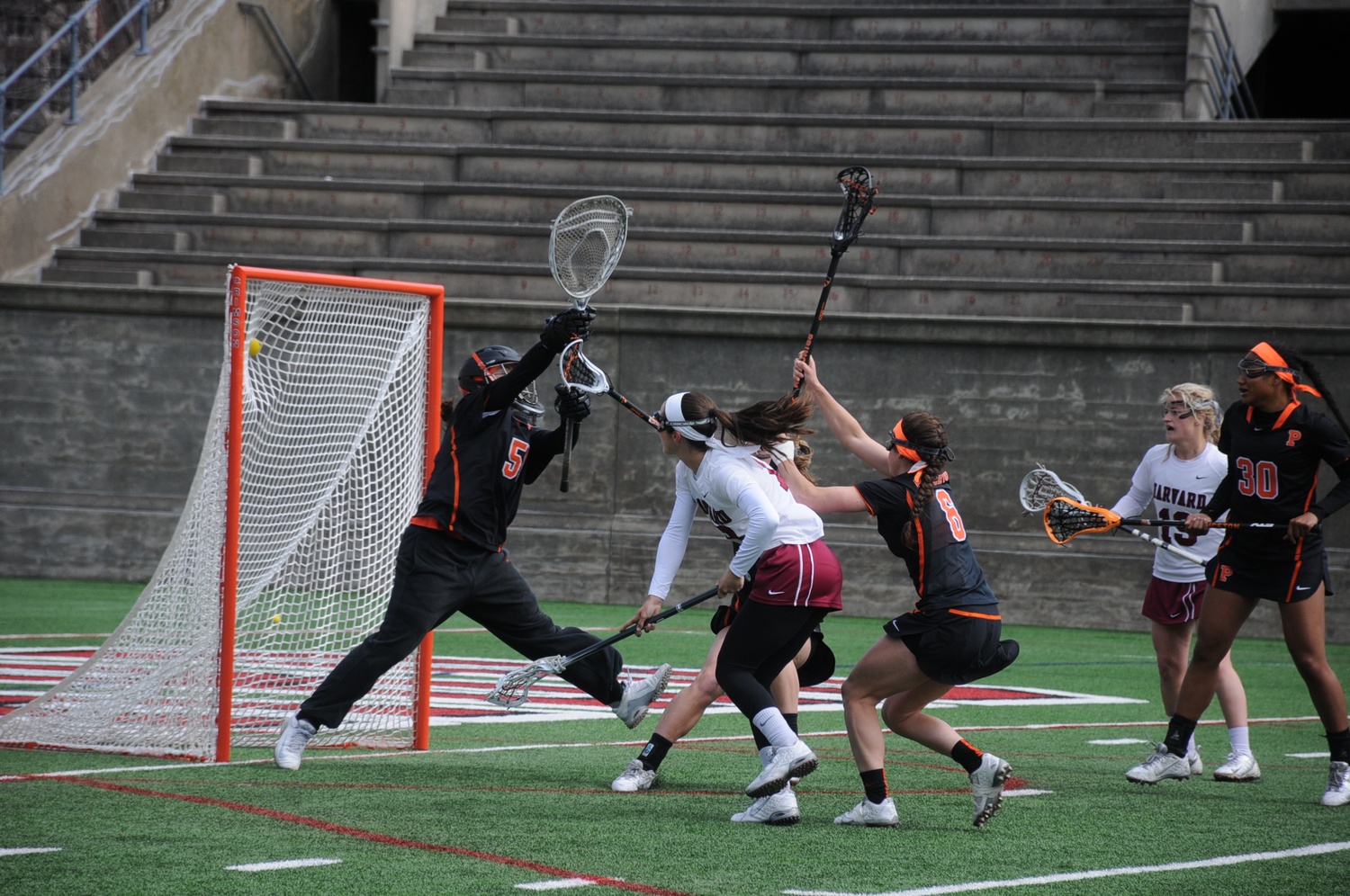 The Harvard women’s lacrosse team entered its midweek fixture seeking to bounce back from a close loss to Penn last weekend and perhaps establish some momentum.

However, the Crimson (7-5, 3-2 Ivy) accomplished neither goal as it ultimately fell to local rival No. 14/15 Boston College (10-6, 2-5 ACC), 16-9, at Harvard Stadium on Wednesday night. Over the years, Harvard has won this matchup 27 times out of 38; however, the defeat marked the sixth time in as many years that the team has lost to the Eagles.

“[Boston College] is a real fast, up-tempo team and I think defensively we weren’t really ready for that,” Harvard coach Lisa Miller said. “I think we needed to adjust to the speed, and if we had started at pace earlier we would’ve been fine.”

The Eagles came out guns blazing in the first half of the game, and after fierce clear attempts by both sides, BC attacker Kate Weeks put the first goal on the board, her 32nd of the season, just 3:27 into the contest.

A little over two minutes later, Eagles attacker Kate Rich doubled her team’s lead with a quick goal. Then immediately off the ensuing faceoff, sophomore midfielder Kenzie Kent capitalized on a breakaway and quickly got the ball back to Rich, who scored her second consecutive goal of the game merely 10 seconds after her first to make it 3-0.

After a successful clear attempt, Crimson freshman midfielder Keeley MacAfee managed to fire one past BC goalie Zoe Ochoa, reducing the Eagles’ lead to two goals, 3-1. However, the squad from the other side of the Charles showed no indication of letting its lead slip. With 21:01 left in the first half, Rich squeezed in her third score of the game, and BC was hardly finished.

For the remainder of the first half, the Eagles continued to get the upper hand. Winning twelve draw controls, compared to the Crimson’s two, BC dominated the period offensively, putting heavy pressure on the Harvard defense and racking up six more goals before the break.

As the first half neared an end, Crimson junior Maeve McMahon managed to soften the blow by putting one past Ochoa with 26 seconds to go, but Harvard returned to the locker room behind, 10-3.

At the start of the second half, the Crimson came out playing a more aggressive game, and junior midfielder Alexis Nicolia tallied the team’s fourth goal just 31 seconds into the period.

“In the second half, we definitely started to focus more on the ground balls and just coming out more aggressive,” sophomore attacker Caroline Ashford said. “We really focused on draw and possessions because we knew we could score if we had the ball.”

Harvard’s burst of momentum would not carry on through the rest of the stanza, however. Two minutes later, BC attacker Laura Frankenfield matched Nicolia’s score, returning the margin to a seven-goal deficit for the Crimson, 11-4.

Despite facing a steep uphill battle, Harvard continued to play deep and spent much more time in the offensive zone than it had in the previous half, outshooting BC, 19-9, in the frame.

After another Eagles goal, Nicolia tried to keep the Crimson in the running, successfully scoring two consecutive goals, her third and fourth of the game.

But in the end, strong attacking play from BC stifled any shot of a Harvard comeback bid. By the final whistle, three Eagles players had scored hat tricks, including Weeks, who finished with six goals on the night, and Kent, who contributed seven assists and a score of her own.

Although disappointed with the result, the Crimson is already focusing on improving before its next contest.

“We need to work on the shooting before our next game,” Miller said. “We ended up outshooting them at the end of the day, but I’d say that of the 27 shots, 25 of them went high… You figure you shoot a little bit better and you start on the draw circle, you’re in the game.”