Liz O'Leary Continues 30 Years of Excellence at the Helm 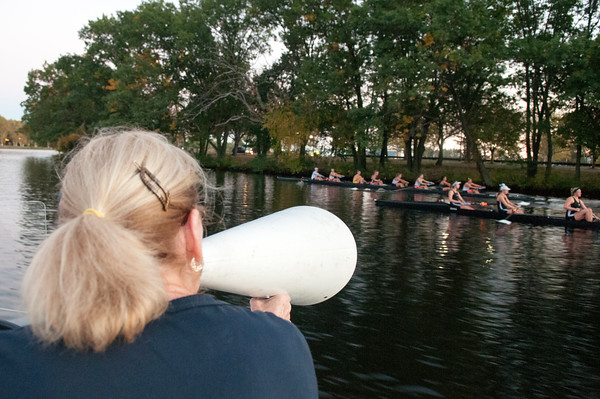 Entering her 30th season, O’Leary has helped the Black and White earn a combined 197-103 dual season record against other fiercely competitive Division I teams. She also coached the team to Eastern Sprins titles in 1987, 1989, 2003, and 2015. By Mark Kelsey
By Patrick J. Anderson, Crimson Staff Writer

The Radcliffe Varsity Heavyweight rowing team has a strong tradition of success both on and off the water. Throughout the program’s 46-year history, many current and former rowers sporting the Black and White have won titles at the national and international levels. While these performances stand as a testament to the focused efforts of the individual Radcliffe athletes, the team also has a rich history of coaching expertise. With the longest time at the helm, Liz O’Leary has set her standards high for the team since the day she assumed the role of head coach in 1986.

“I really believe that a coach sets the culture for a team. We all view ourselves as strong, powerful Radcliffe women, and Liz is really the essence of that,” senior captain Freddie Archibald said. “She expects total commitment and the absolute best out of us every day, and come graduation, we all hope to leave armed with the confidence to accomplish whatever goals we might encounter moving forward. That’s largely thanks to the tone Liz sets for us everyday on our team.”

Prior to coaching at Harvard, O’Leary built up a successful rowing résumé. Her experiences in these formative years truly galvanized her passion for the sport. She attended the University of New Hampshire, graduating in the class of 1976. During her days as a competitive rower, she represented the United States in a total of six World Championships. The summer after graduating college, O’Leary also earned a spot on the U.S. national team competing in the 1976 Olympic games held in Montreal, the first ever iteration to integrate women’s rowing. At this Olympics, she placed seventh in the Coxed Quadruple Sculls event.

She would have represented the States again in the 1980 Moscow Olympics had the U.S. not boycotted the games in response to the Soviet Union’s invasion of Afghanistan. Nevertheless, after finishing up her remarkable rowing career, O’Leary ultimately decided to shift her focus to full-time coaching in 1984.

O’Leary began her journey into the coaching realm at her alma mater UNH. Subsequently, she assumed the role of head girls’ coach at Brooks School, a private boarding school in North Andover, Massachusetts. Quickly learning the tools of the trade, she demonstrated her ability to properly motivate and teach rowers the physical and technical necessities of the sport.

After three years with the Radcliffe Heavyweights, former head coach Lisa Hansen Stone stepped down after the 1986 sprint season. Having accrued a total of 18 regular season wins and ceding only three losses, Stone left big shoes for her successor to fill. In her first season coaching RVH, O’Leary demonstrated that she was certainly up for the task. In the 1987 season, the Black and White went undefeated in all of its dual races, placed 1st at the Eastern Sprints regatta, and took home a bronze medal at the National Championships race.

Many of the Radcliffe athletes attribute the team’s success to the atmosphere that O’Leary cultivates, one that is geared toward optimal performance in all aspects of life.

“Liz pushes us to do our very best within the boathouse and also she serves as a figure of support in our lives in general,” added Archibald. “She has attended countless thesis presentations and a cappella concerts and really takes a vested interest in our lives outside of rowing.”

In a sport where so many variables must be perfectly aligned to field the fastest crews, Liz O’Leary’s impressive record throughout the years serves as an indicator of her keen ability to train her athletes, some of whom have no prior rowing experience.

“I started rowing here at Radcliffe, so I feel like Liz has really brought me into the sport and I am so grateful and happy to have found her as a coach and a mentor,” senior Radcliffe rower Mary Carmack said. “I’ve always been super impressed with the way Liz is able to see and expect more from her athletes than we might even see in ourselves.”

Carmack serves as a perfect example of O’Leary’s ability to rapidly bring her athletes up to speed. Despite having walked-on her freshman year, Carmack managed to excel under O’Leary’s tutelage and has managed to work her way up through the varsity boats despite stiff intra-team competition. She has even gone on to compete in the double sculls event at the Under-23 World Championships in 2015, an exponential leap that could only be possible with the best of coaching.

Now, entering her 30th season, O’Leary has helped the squad earn a combined 197-103 dual season record against other fiercely competitive Division I teams. She has also coached the team to four Eastern Sprints titles—in 1987, 1989, 2003, and 2015—the last of which, the Black and White swept the entire event and won by open water in the premier Varsity Eight event.

As of four years ago, the Ivy League Championships, an Ancient Eight-specific event that has gradually stemmed from the Eastern Sprints, has emerged as another platform allowing Radcliffe to contend with some of the nation’s very best. Radcliffe has consistently medaled and even won the entire event in the first iteration of the regatta in 2012.

Beyond the EAWRC and Ivy League, O’Leary has also helped Radcliffe leave a sizeable footprint at the national level. O’Leary has fostered many successful performances at the NCAA Championships, to which she has led the team to 17 appearances in the event’s 19-year history. In 2003, coming off a nearly undefeated dual season record and an Eastern Sprints victory, Radcliffe took the gold at the NCAA Championships. It was after this phenomenal season that Liz O’Leary was awarded the Collegiate Rowers Coaching Association’s Division I Coach of the Year award.

“I’m always amazed how even though she’s been coaching for 30 years, Liz is always willing to try new things to make us faster,” Carmack said. “She’s very innovative and willing to adapt, whether that’s trying out new [rowing] machines or training plans, which really enables us to keep working toward our goals in an effective way.”

Nowadays, Liz O’Leary can often be heard early mornings and late afternoons on the Charles River coaching alongside her crews from a launch. Managing a team of over 50 rowers and coxswains is no easy task, but Liz O’Leary has proved that she is firmly intent on bringing all her boats up to speed.