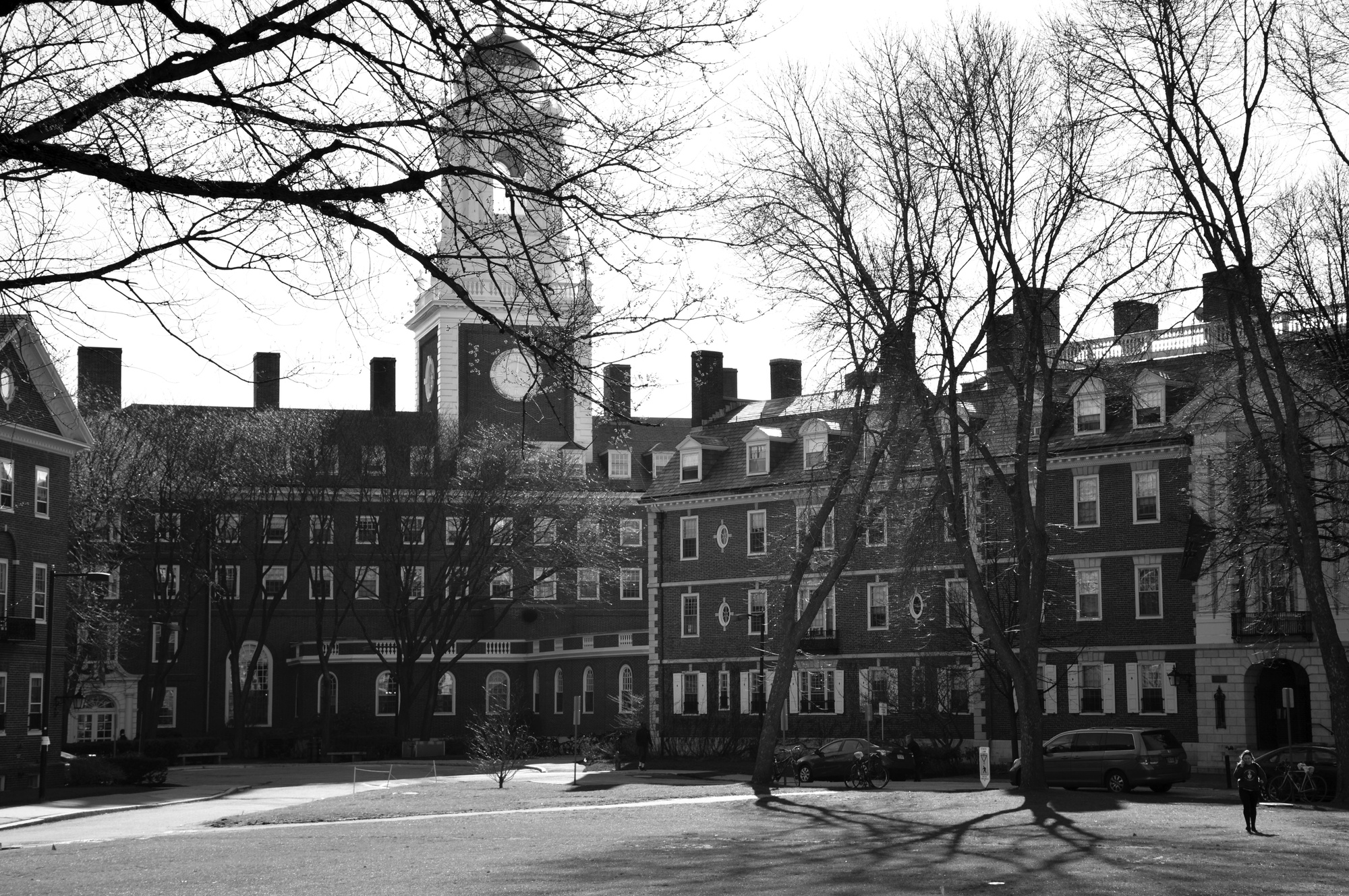 While Harvard freshmen spend part of their spring semester finalizing blocking groups, performing rituals to game the randomized upperclassman Housing assignments, and anxiously awaiting their fate on Housing day, their Yale counterparts trade excited speculation for certainty from day one.

On Housing Day, celebrated the Thursday before spring break, Harvard freshmen wait eagerly for a knock on their door to signal their Housing assignment for the next three years. For Yale freshmen, their fate comes much earlier and with less fanfare—the college notifies them of their four-year housing assignment weeks before move-in day.

At first glance, these two housing systems look familiar. Both sort students randomly into one of 12 dorms—called “Houses” at Harvard and “Residential Colleges” at Yale—and both feature a centrally-located cluster of freshman buildings: the Yard for Harvard and Old Campus for Yale.

Despite these broad similarities, though, the two housing models differ in significant ways. In addition to the earlier assignment to residential colleges, Yale freshmen are limited to students in their residential college when choosing sophomore year roommates. Harvard freshmen, on the other hand, choose their sophomore living companions from among the entire class, a process that offers a broader choice and, some say, adds stress to the first-year experience. 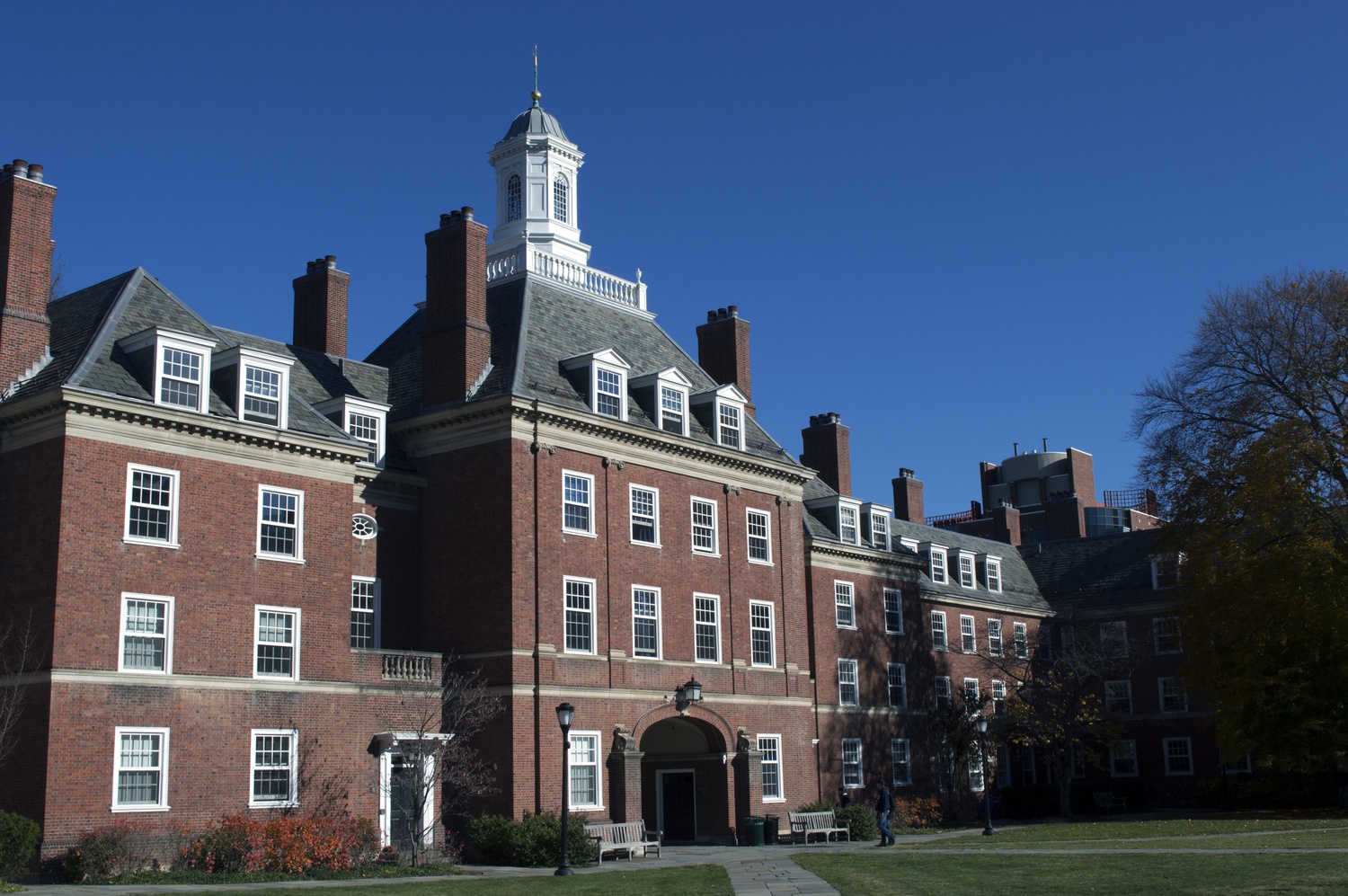 Silliman College, the largest residential college at Yale University. At Yale, most freshmen live in freshman housing on Old Campus, clustered according to their assignments. Freshmen assigned to Silliman and nearby Timothy Dwight instead live in their College among upperclassmen. By Megan M. Ross

Harvard administrators have considered adopting the central idiosyncrasy of Yale’s model—the assignment of freshmen to their residential college before they arrive on campus—many times over the course of the House system’s more than 80-year history. And while Harvard administrators report no definitive plans to make a switch anytime soon, the Yale pre-assignment system has again surfaced as a topic of discussion in recent years.

In a 2001 report, then-dean of the College Harry R. Lewis ’68 wrote that administrators “are asked, from time to time, to consider Yale's system of random preassignment of students to the Yale Colleges.”

Although the report predicted that a change would limit student choice and have a negligible effect on freshmen integration with House dining halls, administrators have not taken the idea off the table. Over the past decade, the College has alternated between directly advocating the switch, opposing any change, and remaining undecided on the matter.

The College deliberated on switching to the Yale pre-assignment model in a spring 2009 “Report on Harvard House Renewal,” which wrote that a subcommittee “discussed moving to Yale’s model, in which freshmen are assigned to a House before they arrive, but did not come to a consensus about the efficacy of this model at Harvard.”

While the report on House renewal ultimately came to no definitive conclusion, previous reports have more strongly advocated the Yale model. A spring 2004 “Curricular Review” of the College suggested that “freshmen be assigned to their upperclass House upon arrival” to improve the “sense of community” at Harvard.

In a reversal of the 2004 report’s recommendation, a December 2005 “Report of the Standing Committee on Advising and Counseling” evaluated the pros and cons of pre-assignment to Houses, ultimately discouraging any change.

A separate 2007 “Report of the First-Year Experience Planning Committee Prepared for the Dean of Harvard College” came to a similar conclusion, reporting that freshmen didn’t prefer housing alternatives such as pre-assignment to the current system.

Dean of Freshmen Thomas A. Dingman ’67, who sat on the committee that prepared the 2007 report, said that the upperclassman peer advising system could sufficiently link freshmen to the Houses.

According to Stephen Davis, head of Pierson College at Yale, the college often receives inquiries about the workings of their residential model, though he said he had not heard of specific conversations about adopting the model at Harvard.

Faculty Dean of Adams House, John G. “Sean” Palfrey ’67 said discussions of a possible switch to Yale’s housing model have “ebb[ed] and flow[ed]” during his time at the College. Palfrey cited the absence of a “clear right answer” as the reason the College has never taken the step to adopt Yale’s pre-assignment practice.

Like the reports, Palfrey’s own views on Yale’s pre-assignment system have changed over time. While he told The Crimson in 2004 that he saw no reason to change Harvard’s model, he said his views have “shifted slightly” since then—a result of concerns over what he considers inadequate freshman year social life. 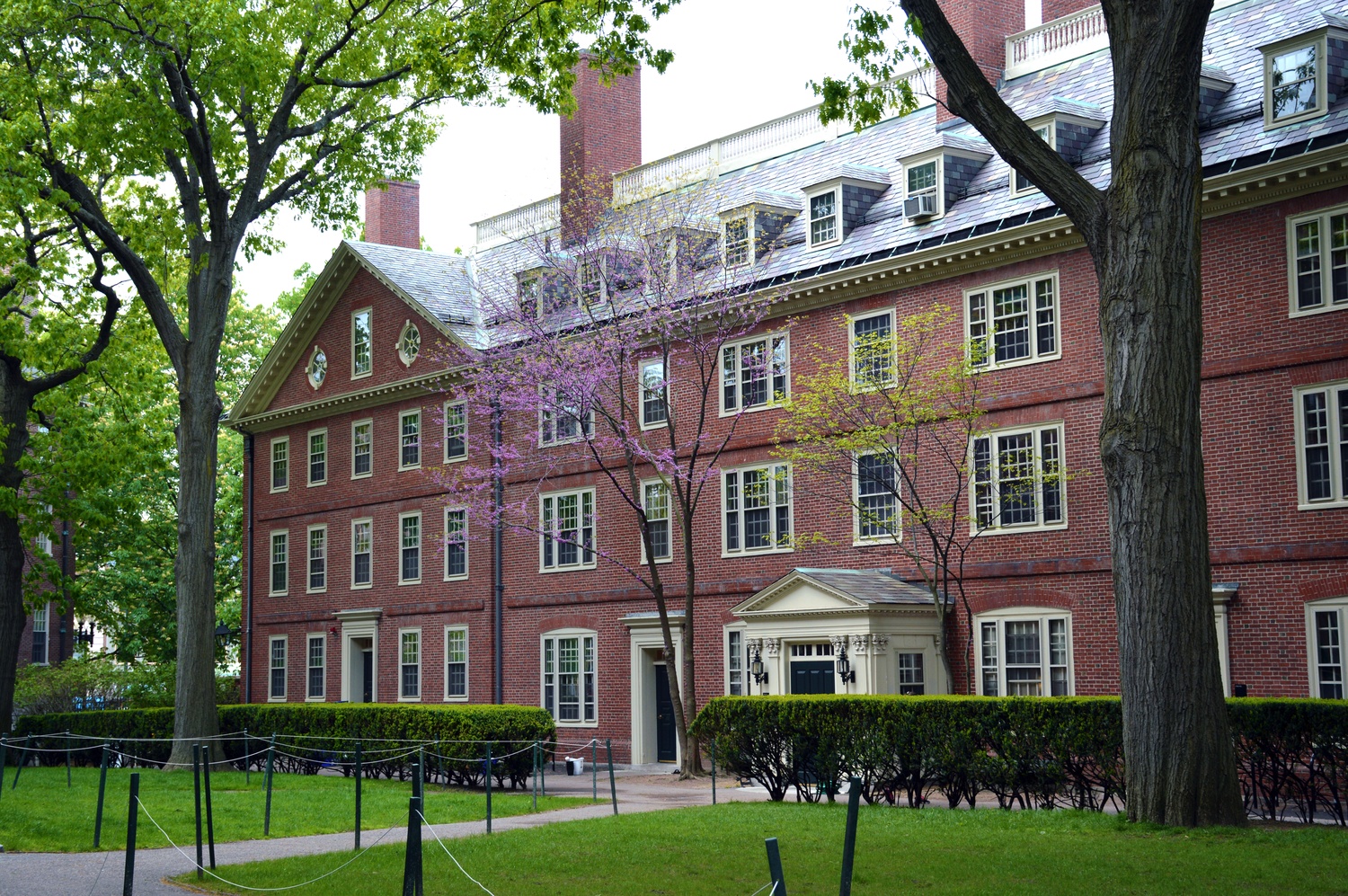 Straus Hall, a freshman dorm in Harvard Yard. Before Housing Day, freshmen in Straus have no clue as to which upperclassman house they'll be assigned. At Yale, freshmen are housed according to their assigned Residential College. By Megan M. Ross

Dingman reiterated Palfrey’s concern about inadequate social accommodations for freshmen in the Yard. “We don’t have any one large gathering place to see and be seen,” Dingman said.

References to a switch in the reports of the 2000s emphasized potential benefits to advising and the academic life of the undergraduate population. In recent years, as discussions on social life have taken center stage, conversations about a pre-assignment switch have focused on possible social benefits. Those concerns have made their way into closed-door meetings between administrators and Harvard’s unrecognized final clubs.

A set of confidential meeting notes from two spring 2015 meetings, distributed by Associate Dean of Student Life David R. Friedrich, expressed concern about the “social isolation” of the first year and recommended that College administrators “find ways to connect students to the Houses earlier.”

Months later, in the fall of 2015, Lowell House tutor Eli B. Schachar met informally with undergraduate leaders of male and female clubs. In an email to top College administrators, Schachar summarized his conversations with club leaders, recommending that the College move closer to Yale’s residential model.

William A. Greenlaw ’17, the Undergraduate Council’s Finance Committee chair who has made student social life a focus of his tenure, said he thought Yale’s housing model might address perceived problems with the freshmen experience.

“In my mind, it would immediately solve a lot of vexing problems of social spaces," Greenlaw said.

While not all Harvard undergraduates have expressed Greenlaw’s level of support, many are receptive to proposed changes.

William N. Corbett ’16 said he was struck by the show of enthusiasm from upperclassmen in his then-girlfriend’s residential college that greeted her on move-in day at Yale.

“I remember being like ‘oh my god, this is so welcoming,’” he said. “[At Harvard,] you have these little clusters that are the blocking groups and nodes that are the people and it’s much sparser, whereas at Yale it’s like the house is much more integrated,” Corbett said.

He also said blocking at Harvard can be a stressful experience. The College’s 2007 report on the first-year student experience found that 38 percent of the Classes of 2008 and 2009 reported a “stressful” or “very stressful” blocking experience.

Yale graduate Joanna Cornell, now a proctor in Thayer, said she observed the trials of the blocking experience in her Harvard entryway.

Proponents of the Harvard housing model, however, argue that blocking allows for both more flexibility in choosing roommates and the festive fun of Housing Day.

Mather Faculty Dean Michael D. Rosengarten said the College-wide celebration is the most popular event in the Houses, and he would be reluctant to give it up.

Still, Rosengarten acknowledged several problems with Harvard’s current system, including the isolation that students without blocking groups may face, and the difficulty of the sophomore transition to the Houses. Last fall, Mather House piloted a sophomore advising system, in which sophomores were paired with upperclassmen advisers in the House.

“I think it has been brought up at times,” Rosengarten said, referring to a pre-assignment housing system. “It is a model that people have been thinking about, because of the issues of the sophomore transition.”

Michael C. Ranen, the freshman resident dean for Ivy Yard, said there are advantages to having resources and staff dedicated only to freshmen.

“There [are] a lot of needs that are particular to the first year experience, both academic, socially, extracurricularly,” he said. “So… we have proctors and resident deans and a whole staff at the FDO who solely focus on the freshman experience.”

One of the more significant differences in the Yale housing model is the undergraduate advising system, a model that administrators have largely avoided. Instead of living alongside graduate students, Yale freshmen reside with freshman counselors, or “FroCos,” who are seniors at the college. Like proctors, FroCos are compensated through reduced room and board costs. Cornell was a freshman counselor during her time at Yale. 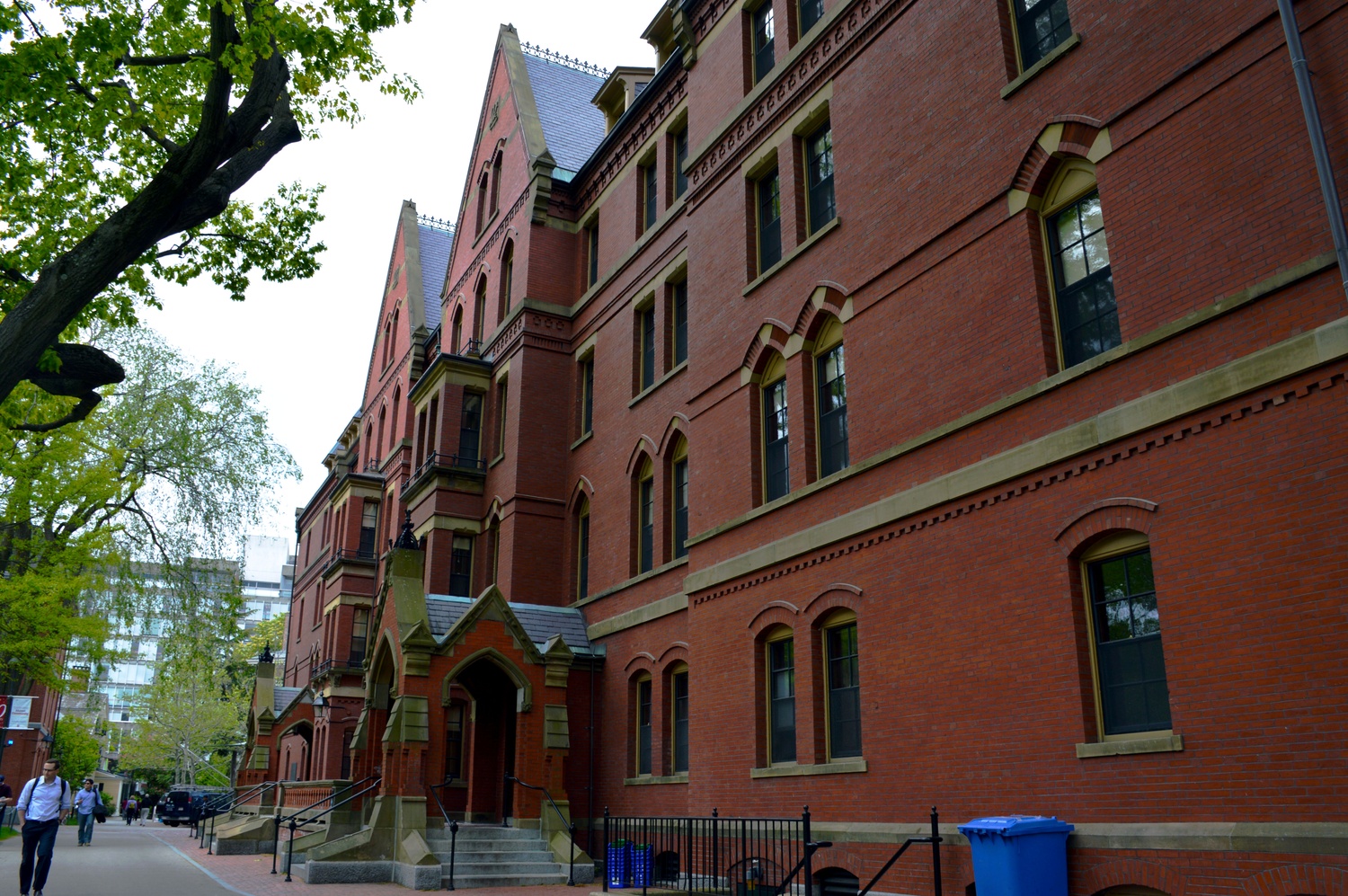 Matthews Hall, a freshman dorm at the heart of Harvard Yard. By Megan M. Ross

“I think when you’re really close in age with people you’re advising, I think you are seen less as an adult that people respect whereas now I feel like I am making friends with the kids but I’m also kind of like their mother and I’m also their adviser,” she said.

Cornell added that, as a proctor, breaking up parties and making attendees throw away alcohol is standard procedure, a far cry from her experience as a FroCo where she would only “make someone dump out their booze” in extreme situations.

“I would say our role as freshman counselors is not usually as disciplinarian,” Justin Young, a FroCo in Branford College, said. “ We have a very sensible [alcohol] policy in that we really focus more on safety than discipline.”

“I think we are asking ourselves how could we go about this differently,” Dingman said. “ It’s very much on our mind because we can’t turn our back on the law, but maybe we can learn from other institutions.”

While Palfrey is open to comparing other residential systems, he said students and administrators have not expressed a strong desire in favor of a switch.

Speculation of a switch, Palfrey said, “comes and... goes, but I have not seen it become such a strong push from anybody’s perspective that the College wants to change dramatically.”

—Staff Writer Mia C. Karr can be reached at mia.karr@thecrimson.com. Follow her on twitter@miackarr.