Team of the Year: Women's Track and Field, a Crimson Dynasty

Under coach Jason Saretsky, the Harvard women's track and field has established itself as an Ivy League and national powerhouse, building an impressive reign over the top of the standings in the past five years.
Co-captains Paige Kouba and Autumne Franklin led the team to its third straight outdoor Heps title and seventh overall Heps crown (indoor and outdoor) in the past four years.By Courtesy of Harvard Athletic Communications
By Julio Fierro and Phillip Yu

Outstanding. Momentous. A force to be reckoned with. These are all words and phrases that have been used to describe this year’s Harvard women’s track and field team, the most successful in Crimson history.

But perhaps no superlative describes the team better than “record-breaking.”

The team broke nearly 20 school and Ivy records this year, part of a campaign that saw the squad win both the indoor and outdoor Ivy League championships.

The team’s success this year is a continuation of the dominance the Crimson has had over the past few years. After retaining the Ivy title this year, Harvard has taken the past four indoor crowns as well as the past three outdoor titles, the first team to do so for consecutive years since Cornell from 2002-2007.

This year, however, the team took the next step. After sending four athletes to the NCAA Outdoor National Championships the past couple of years, the Crimson had five athletes qualify in six events for the USA Olympic Trials in July—senior co-captains Paige Kouba and Autumne Franklin, freshman sprinter Gabby Thomas, sophomore distance runner Courtney Smith, and junior sprinter Jade Miller.

“What this season has shown is that when enough people are listening and tuned in on that wavelength, you get a really amazing team performance,” Kouba said. “One that will continue to grow.”

The success starts with the short distance athletes, where Franklin and Thomas headline a group that includes standouts like freshman sprinter Ngozi Musa and Miller. 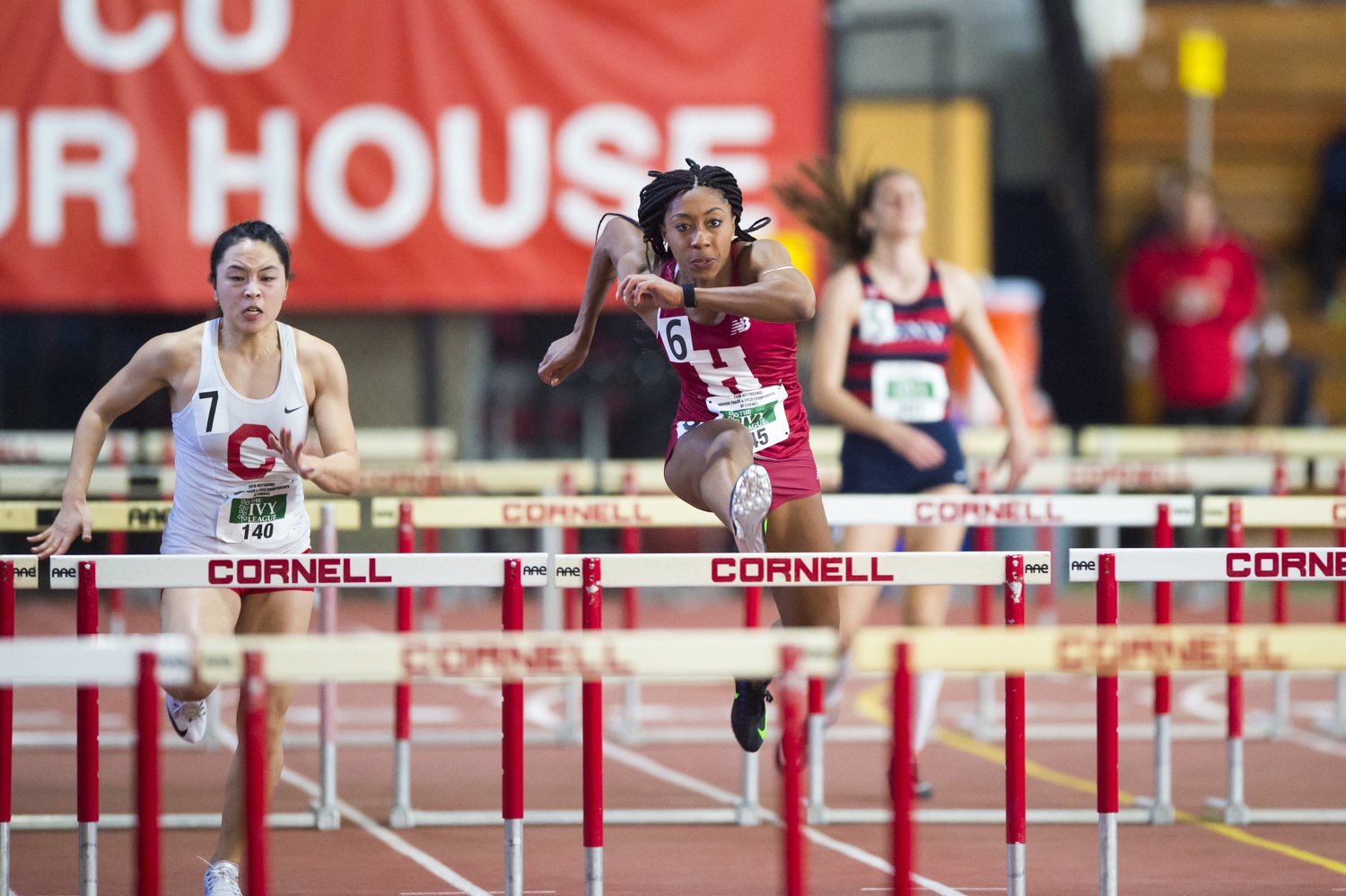 Sprinter Autumne Franklin '16 was one of five athletes to qualify for the USA Olympic trials this summer, finishing sixth place overall in the women's 400 meter hurdles. By Courtesy Harvard Athletics

Franklin, who will be heading to the Olympic Trials in the 400-meter hurdles, has been the Ivy League’s top hurdler this season. For her, the wins began in the indoor season, where she scored victories in the 60-meter hurdles and 400-meter run at the indoor Ivy Championships. With the title in the hurdles, Franklin finished her indoor career at Harvard as a four-time Ancient Eight Champion in the event.

“The goal is definitely to make the [Olympic] team,” Franklin said. “If I don’t, and I have a great time, and I run a great race—that’s one thing, but I’m definitely going to be shooting for as high as I can go.”

Thomas has been Franklin’s counterpart in the short-distance sprints. At the Indoor Ivy Championships, Thomas won the long jump, 60-meter dash, and 200-meter dash and was able to replicate her success at Outdoor Heps, winning the 100-meter and 200-meter dashes by significant margins and placing third in the long jump. The rookie also teamed up with Musa, Miller, and Franklin to take home the 4x100 meter title, an event in which Harvard has the Ancient Eight record.

Already, Thomas owns the Ivy and Harvard records in the indoor 60-meter, outdoor 100-meter, and indoor and outdoor 200-meter dashes. In the 100-meter and 200-meter races, Thomas will be joining Franklin at the USA Olympic Trials, where she figures to be a considerable threat.

Musa, meanwhile, has been a force of her own after claiming top-ten all-time marks in the 60-meter dash, indoor and outdoor 200-meter dash, and 100-meter dash. The star power of rookies like Thomas and Musa has been a pivotal aspect of this year’s success, particularly after the loss of All-Ivy sprinters Danielle Barbian ’15 and Ashley Collinsworth ’15 last year.

“It’s been unbelievable—watching freshmen like Gabby Thomas and Ngozi Musa start their careers with the kind of elite performances that I’m just now working on,” Kouba said. “I’m so excited for them and so thrilled with what they’ve brought to the program.”

“On any given day, either one of us can win,” Franklin said. “I’m excited to see who’s going to push the team forward next year, and I think [Miller] is gonna do great. She’ll have me as a training partner and as a mentor forever.”

The dominance continues with the middle and long distance runners, headlined by Kouba and Smith. Kouba had a stellar outdoor season, where she at different points held the top time in the country in the 3000-meter steeplechase and 1,500-meter run, including a 9:50.21 time in the former, just under three seconds below the qualifying mark for Olympic trials.

Kouba placed first in the former event and third in the latter at Outdoor Heps, despite running the second race less than an hour after finishing the first. The Eugene, Ore. native also took home third place in the mile at Indoor Heps. 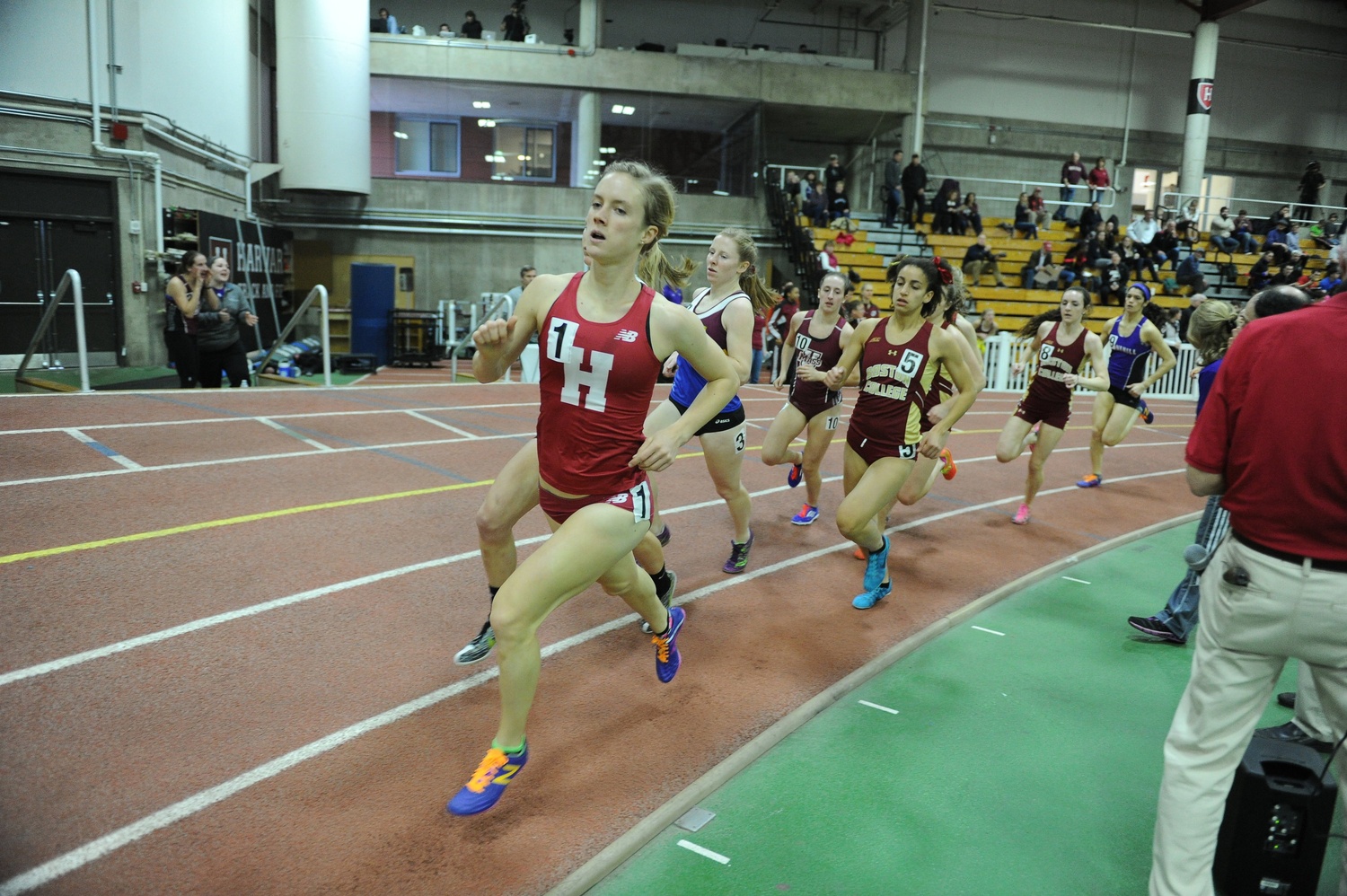 Paige Kouba capped off her four years on the women's track and field team with a qualification to Olympic trials in her hometown of Eugene, Ore. in the steeplechase. By Courtesy Harvard Athletics

“It’s so inspiring to see how fierce [Paige] can be,” Franklin said. “To really leave everything on the track is really admirable.”

Along with Franklin, Thomas, Miller, and Kouba, Smith is the team’s final USA Olympic Trials qualifier, having secured a place in the 10K. Her time of 32:08.32, set at the Stanford Invitational in April, is the second fastest time in the country this year and one of the top-ten fastest times in NCAA history. The sophomore’s mark is particularly impressive given it was just short of the times that qualified for the 2012 Olympics. Smith was also an indoor first team All-American in the 5K, finishing eighth overall in her first taste of NCAA Nationals competition.

In the field events, the Crimson boast another outstanding lineup, including junior Nikki Okwelogu and senior Madison Hansen, the Ivy League record holder in the Heptathlon.

Okwelogu, recipient of The Crimson’s Female Performance of the Year award, won third place at the indoor NCAA nationals in the shot put by throwing an Ivy record 17.66 meters after taking home her third consecutive indoor Ivy title in the event. She followed that up in the outdoor season by cruising to victory at the Ivy Championships in the discus throw and shot put—her third consecutive victory in the latter.

With such a stacked lineup, the team cruised to Ancient Eight titles in February and May. Now, the team has its sights set beyond the Ivy League, hoping to perform well on the national stage.

“We’re looking to score top five as a team at the meet, which is unprecedented for Harvard,” Franklin said. “It would be just amazing, and I know we can do it. We’ve worked really hard and had our eyes on it for a long time.”

Such a placing is not completely out of the question according to the USTFCCCA’s national rankings, which consistently place Harvard in the top 20 teams in the country. As of May 16th, the Crimson ranks No. 17 in the nation, and at its peak in April, Harvard was ranked tenth—the first time any Ivy League team has ever been ranked in the top ten.

Kouba credits much of this year’s upsurge in success to the team’s head coaching staff, led by head coach Jason Saretsky.

“[The coaches] have kind of just committed themselves and their philosophy to being great,” Kouba said. “Being great sounds so simple and so cliché, but it means so much more; it’s about the lifestyle and confidence and the desire to do your best that you possibly can and not take compromises.”

This summer, Kouba and Franklin, who plan to run professionally, will be graduating along with all the other seniors on the team. But under the guidance of Saretsky, and with such freshmen standouts as Thomas and Musa, the team looks set to continue its dominance for years to come.

“The women’s track and field team now is going places,” Kouba said. “We’re doing things that have never before been seen in the program’s track and field history, and we’re working harder and smarter than the team ever has.”

—Staff writers Julio Fierro and Phillip Yu can be reached at julio.fierro@thecrimson.com and phillipyu@college.harvard.edu