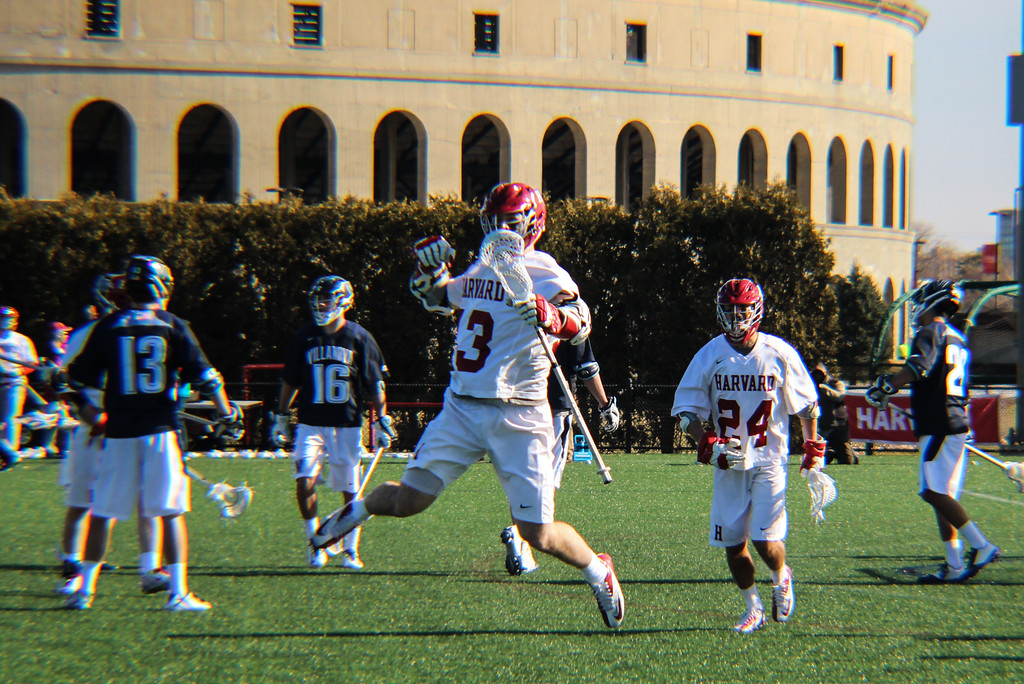 Sophomore Morgan Cheek, shown in previous action against Villanova earlier this season, scored a team-record nine goals against Brown to advance the Crimson to the Ivy League Tournament final against Yale, which the team would go on to lose. By Hayoung Hwang

Upset Game of the Year: Men's Lacrosse Defeats No. 2 Brown

By the time the rain had stopped on the damp Friday night showdown at Stevenson-Pincince Field, in Providence, R.I., it was Harvard who had emerged with a nailbiting, 13-12 victory.
By George Hu

To put Brown’s offensive dominance during the 2016 regular season in perspective, one only has to look to the fact that the team’s starters on the attacking line, Dylan Molloy, Kylor Bellistri, and Henry Blynn, scored more goals on their own than three of the Bears’ Ivy League foes managed all year.

Entering the conference tournament, the trio had collected 144 goals as a unit. Harvard, Brown’s opponent in the first round, had scored 161 as a 42-man team. Just as in every other game it played, the No. 2 Bears were expected to overwhelm the Crimson offensively when they finally faced off on May 6, with a berth in the tourney final on the line.

By the time the rain had stopped on the damp Friday night showdown at Stevenson-Pincince Field, in Providence, R.I, however, it was Harvard who had emerged with a nailbiting, 13-12 victory.

“We came into the game knowing that we had to be at our absolute best to beat them,” Harvard coach Chris Wojcik ’96 said. “But at the same time, we knew were capable of that. We believed all year we were good enough to match up against anyone in the country.”

Even at halftime of the contest, all was still going according to script. Top-seeded Brown held an 8-5 lead over the fourth-seeded Crimson after finishing the second quarter on a 3-0 run, and was on its way to reaching its then-best mark of 17.07 goals per game in the NCAA. The home crowd of almost 2,000 was buzzing as it sensed another win on its way.

Harvard, meanwhile, was holding on thanks to an impressive first half performance from sophomore attackman Morgan Cheek. Cheek tallied three goals to go along with an assist, keeping his squad in the game.

Despite Cheek’s brilliance, the Crimson’s season was hanging by a thread. Having finished the regular season an even 7-7, and 3-3 in conference play, the team was a long shot to earn an at-large bid to the NCAA tournament. Only an Ivy League tournament title would get it there.

It was clear to everyone in the locker room that a potential loss to the Bears would mean the end of the season.

“We struggled with a lot of ups and downs during the season,” Harvard co-captain and defender Stephen Jahelka said. “We knew, though, that the postseason’s a whole new ballgame, and we still had a chance to earn our way into the [NCAA] tournament.

With its back against the wall, the Crimson responded.

No player had a bigger role in the comeback than Cheek, who found the back of the net four times in the third quarter before finishing the night with a career-high nine scores.

He immediately set the tone for the rest of the contest by finding the goal just 13 seconds after the restart, in a man-up set. He went on to add a goal in transition as well as one in a man-down set, exhibiting his ability to score in any situation.

“Cheek was the star of the show that day,” Wojcik said. “He showed how much he had improved over the course of the season with a big performance on a big stage. I couldn’t have been prouder of him.”

On the other end of the field, the Harvard defense held the potent Brown offense to its second scoreless quarter all year in the third frame. The first coincidentally came in the previous matchup between the two squads, and in the third quarter as well. In that game, the Bears still managed to win by a comfortable three-goal margin.

This time, however, the Crimson made sure to ride their defense to a lead and see it through. After Cheek’s sixth goal of the game put Harvard ahead, 9-8, midway through the third quarter, it never trailed again.

By snuffing out a late Brown rally, the Crimson emerged with the 13-12 win, in the process earning a spot in the conference tournament final.

Though Harvard would go on to fall to Yale, 14-9, and come up short in its quest to claim a spot in the NCAA tournament, the victory over the Bears gives the program something to build on as it enters the offseason.

After all, not every team in the country can claim that it defeated two Top-5 opponents in 2016.

“When the current seniors and I arrived on campus, our goal was to make Harvard competitive on the national level,“ Jahelka said. “Wins like these are extra special because they mean we’re heading in the right direction.”