Walker Kirby Leads Men's Lacrosse on Defense and Off the Field 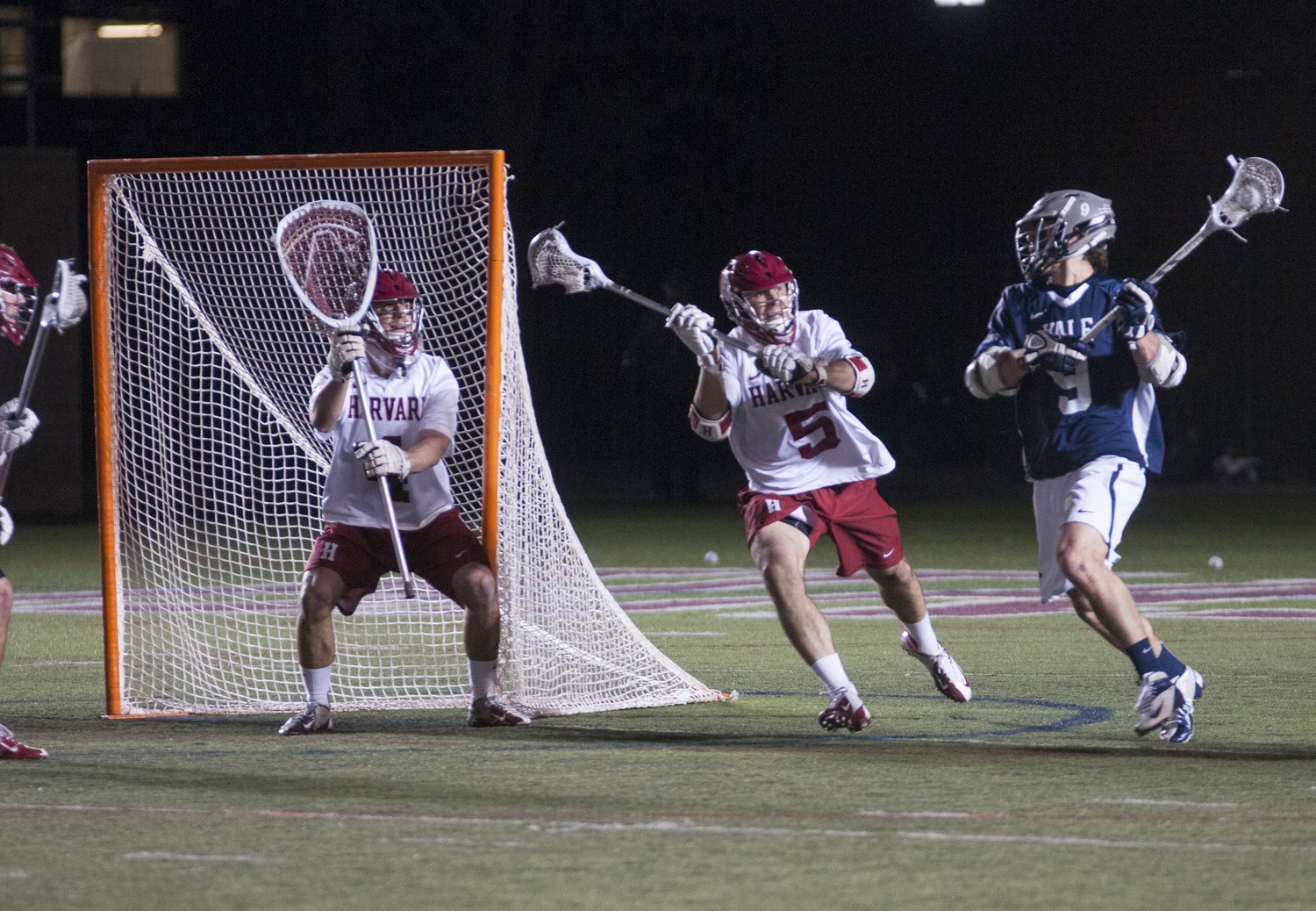 Senior Walter Kirby, pictured here in earlier action, has been an integral part of the Harvard defense the past two seasons. By Robert F Worley
By Patrick J. Anderson, Crimson Staff Writer

Across the board, student-athletes at Harvard must strike a delicate balance between academics and athletics—a task that, in and of itself, requires time management and resolve.

For senior Walker Kirby, a defenseman on the men’s lacrosse team, time management has proven to be one of his strong suits, enabling him to contribute to the intellectual and competitive atmosphere that embodies Harvard.

On March 30, Kirby was announced as one of only 10 lacrosse finalists for the 2016 Senior CLASS Award.

The accolade is a distinct honor awarded to NCAA Division I athletes who have displayed notable achievements in the spheres of character, community, classroom and competition.

Through his commitment to his team and to service, Kirby serves as an example of these cardinal values.

In athletics, Kirby has proven to be an integral part of the men’s lacrosse team throughout his four-year tenure as a defenseman.

“His competitive spirit fuels our team all week before games, because of his consistently high level of effort and dedication,” said freshman midfielder Conor Murphy. “The level of intensity and focus that he brings to practice everyday raises the bar for everyone else on the team…. He is always making the tough play, diving for shot out of bounds, coming up with a hard ground ball, and those plays inspires everyone on the field and on the sideline.”

While obviously goals win games, strong defense that is able to stave off shot attempts and snatch up ground balls to earn your team possession is a pivotal part of the winning recipe as well.

During his sophomore year, Kirby helped the Crimson to an Ivy League Championship split with Cornell, the first time the team had won a share in 24 years. In his subsequent year as a junior, Kirby transitioned from a long-stick midfielder to close defense, upon which he posted career highs with 33 ground balls, 13 caused turnovers and four goals in transition.

This impressive season resulted in his being named All-Ivy League Honorable Mention and to the All-New England Intercollegiate Lacrosse Association (NEILA) second team.

In his most recent season at Harvard, Kirby has distinguished himself yet again, picking up 28 ground balls and causing 7 turnovers, to place the Crimson in fourth in the Ivy League.

“[Kirby’s] just extremely passionate about whatever it is that he’s doing,” defenseman Stephen Jahelka said. “Obviously that’s the case on the field—he’s always trying hard, he never takes a practice off, and gives a hundred and ten percent every day. He’s also really true to himself about being a student-athlete here and he brings that same intensity he has on the lacrosse field to the classroom.”

Demonstrating his ability to translate his passion for competition into the classroom, Walker Kirby has distinguished himself as an exemplar student at Harvard.

The economics concentrator has managed to maintain a 3.7 GPA throughout his seven semesters here, while additionally fulfilling his requirements for a secondary concentration in government.

“[Kirby] challenges himself in all his courses,” said Murphy upon being asked about Kirby’s academic success. “He chooses to take difficult and challenging courses, even outside of his concentration, setting a precedent, and younger guys look to that and follow suit. He doesn’t just take classes to get good grades, or get by, but takes them to truly learn the subject and get the most out of it.”

In addition to cultivating his own talents both on the field and in the classroom, Kirby has thrown his hat into the ring in other non-academic, non-athletic pursuits.

Kirby’s journey through service started in the summer following his freshman year.

Currently, he holds the position of service representative on the lacrosse team’s leadership council. As such, Kirby has been crucial in getting his own team involved with several service initiatives aimed at helping out the local Boston community.

Team Impact and the One Love Foundation are two organizations in particular to which he has encouraged his teammates to contribute.

With Team Impact, the men’s lacrosse team has developed a close relationship with a young man suffering from several ailments. As a result of the formation of his bond, the team has invited him to practices and games and even gave him his own official locker in the team’s locker room.

The One Love Foundation is a charitable organization that aims to raise awareness about the issue of domestic violence. In order to raise donations for the One Love Foundation, Kirby encouraged his teammates to log their yards run during winter seasons as part of the Yards for Yeardley campaign.

“One Love has been something that has really brought our team together and Walker’s been heavily involved in promoting that,” said Jahelka. “Walker not only makes sure everyone’s doing their yards [for the campaign] but he makes sure to run a lot and work extra hard for the cause. He’s also been good about not only taking this cause to our team but also making sure to spread awareness around campus about issues of domestic violence.”