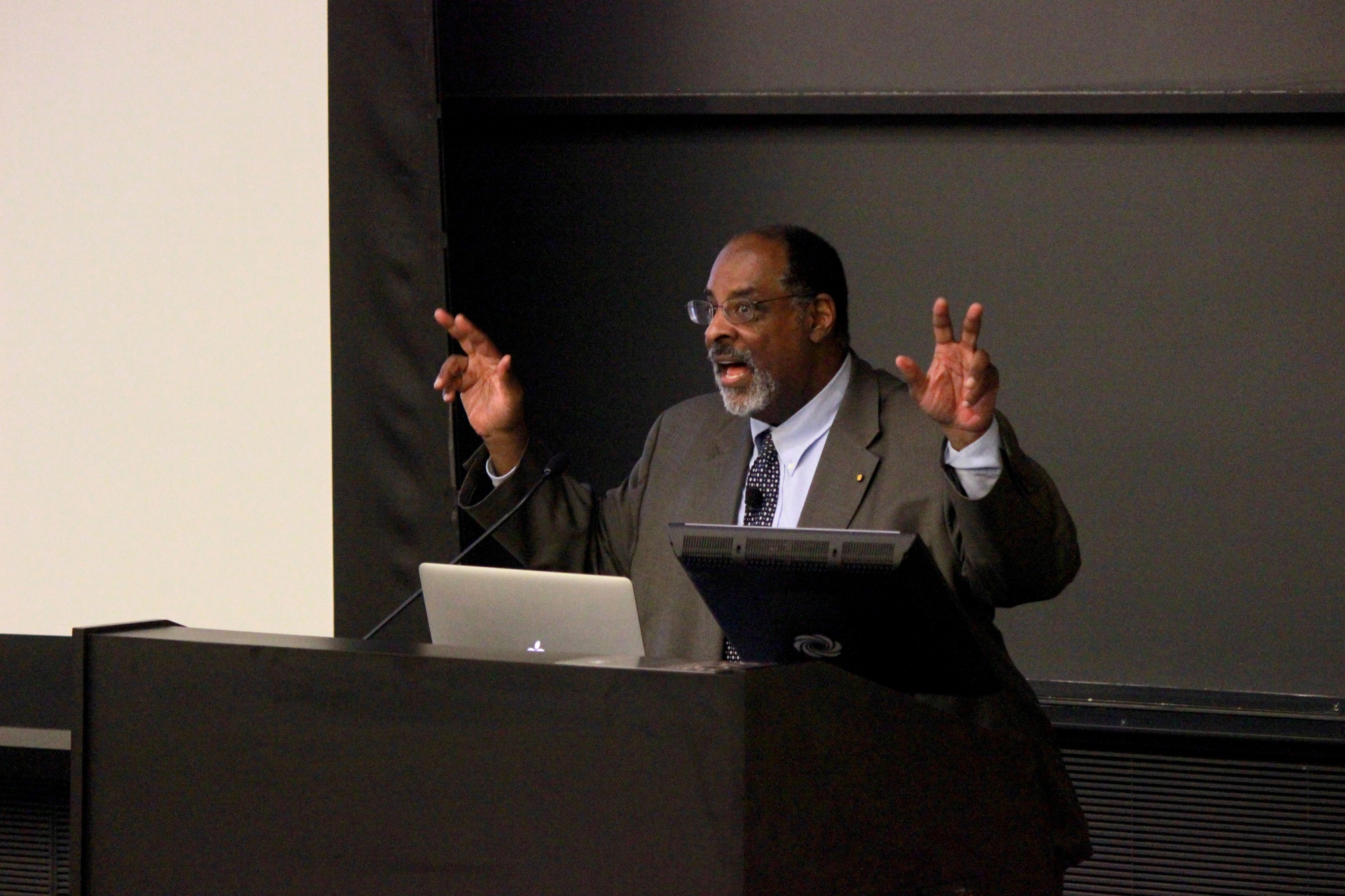 Joseph L. Graves discusses the legacies of former Harvard professor Louis Agassiz and Charles Darwin’s legacies in Northwest Labs Tuesday night. The talk was part of a speaker series put on by the Peabody Museum for their 150th anniversary.
By Michael J. Won and Phelan Yu, Contributing Writers

Evolutionary biologist Joseph L. Graves examined the controversial history of Louis Agassiz’s views on race and human evolution and its implications for the modern perceptions of race in America at a lecture Tuesday night.

The event, titled “Smashing Agassiz’s Boulder,” was part of the “Race, Representations, and Museums” lecture series. It was co-sponsored by the Peabody Museum of Archaeology and Ethnology, and the departments of Anthropology and Human Evolutionary Biology, in addition to the Hutchins Center for African and African American Research.

Agassiz, an eminent biologist and geologist during the 19th century, was a professor of Zoology and Geology at Harvard. He founded the Museum of Comparative Zoology and later became dean of the Lawrence Scientific School, the predecessor to the School of Engineering and Applied Sciences.

Graves noted that Agassiz was a proponent of polygenism, which is the theory that the human race descended from multiple origins, and believed that Europeans were racially superior to people of African descent.

Graves, who has appointments at North Carolina A&T State University and the University of North Carolina at Greensboro, said many of Agassiz’s European and American contemporaries agreed with his views, which caused polygenism to become a prevailing theory.

“In the mid-19th century, the species question was the greatest scientific problem of the age,” Graves said. “Biology was, in the main, an enterprise conducted by persons of European descent... This might have been a different study if different people had engaged in it.”

Graves described Agassiz as a “giant of the European and American science community,” and said that Agassiz’s theories on the inferiority of African peoples were used by American proponents of slavery to justify the practice.

However, according to Graves, Charles Darwin’s competing theory of evolution undermined Agassiz’s views. This led to the modern understanding that all humans have the same evolutionary lineage and that traits, such as intelligence or height, are not connected to race.

Yet, Graves argued, misunderstandings of race still permeate America. He attributed this issue to a lack of education on evolution in both American high schools and universities.

“Of all industrialized nations, America has been the most resistant to evolutionary theory,” he said. “This shows in the absence of [teaching on evolution] in the biology curriculum in a large section of our nation.”

"It's abundantly obvious that our society still has a really serious problem with the issue of race,” he said. “Too many people don't understand that when applied to humans, it's really a scientifically indefensible concept."