Athlete of the Week: Purce Nets Four in Three Games 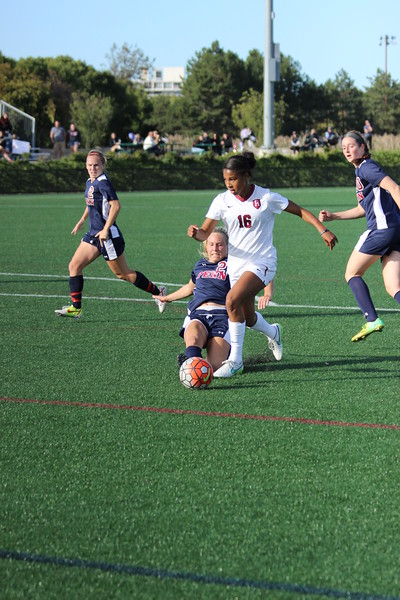 With 34 goals, Purce is only three away from tying Naomi Miller ‘98 and Emily Stauffer ‘99 for third on the all-time Crimson scoring list.
By George Hu, Crimson Staff Writer

When Harvard senior forward Midge Purce lined up against Army last Monday, she knew the opposing defense would be marking her carefully. It is what she has come to expect—and embrace—after leading the Crimson in scoring three years running.

In fact, entering the matchup, Purce was second to only Katherine Sheeleigh ’11 in the team record books for most career goals since the 1990’s. Purce had 30 through her junior season, while Sheeleigh finished her career with 31. On the all-time scoring list, Purce sat 6th, also one spot behind Sheeleigh.

One week later, Purce has not just matched Sheeleigh but blown by her, scoring four times in three games. The haul began with a goal against the Black Knights on Monday, followed by two tallies against Central Connecticut State on Thursday and one more playing away at Louisville on Sunday.

Purce’s strong performances were enough to guide Harvard to two victories in the three games. After starting the season with a loss to No. 10 UConn, the Crimson is now back at .500 with a record of 2-2-0. Individually, Purce was also named the Ivy League Co-Player of the Week, along with Princeton senior forward Tyler Lussi.

“Midge has earned these honors,” Harvard coach Chris Hamblin said. “She has always been a threat offensively, but her commitment to defending this early in the season has really made her stand out.”

Perhaps most frightening for opponents this season may be the fact that Purce has honed her skills on the defensive end as well. Through four games she has shown an improved ability to anticipate passes and take the ball off the feet of opposing players, earning the Crimson key second-chance opportunities.

This skill set has helped Purce create chances on her own, as two of her four goals this past week came unassisted. Her goal against Army this past week was particularly telling, as she stole a pass and ran half the length of the field on her own before slotting the ball home.

“As a team we have committed to our defending collectively,” Hamblin said. “Midge is leading by example by working hard both sides of the ball.”

During the week, Purce exhibited her ability to score in other situations as well, and also displayed a sharp passing touch.

Against the Blue Devils on Thursday, she scored first off of a corner and then off a through ball from fellow senior forward Rachel Garcia. Purce also set up a great chance in the 17th minute that was narrowly missed by Joan Fleischman, another senior forward.

A big part of Purce’s growth is likely due to her involvement with the U.S. Women’s U23 team over the summer. Since joining the program at the U17 level, Purce has represented the U.S. in several tournaments, with the most recent being the Nordic Tournament this past June.

“Every time I play with them [the U.S. teams], I feel like I learn and grow a lot,” Purce said. “Everyone there knows something that the others don’t, and we all help each other improve different areas of our game.”

Purce has taken the lessons she learned with the national team back to Cambridge, but she feels that her role on the team has not changed much.

“Our coaches expect a lot out of all the players, whether it’s in practice or on the field,” Purce said. “Besides going from freshman year to sophomore year and so on, I feel like we all know our role on the team and we have the same expectations.”

With 34 goals now to her name, Purce is only three away from tying Naomi Miller ’98 and Emily Stauffer ’99 for third on the all-time Crimson scoring list.

Despite the historic implications of her scoring, Purce realizes that it is her senior year, and she only has a single goal in mind.

“We won the Ivy title my first two seasons here and we want to get that back this year,” Purce said. “The goals are nice, but the wins are the most important thing.”