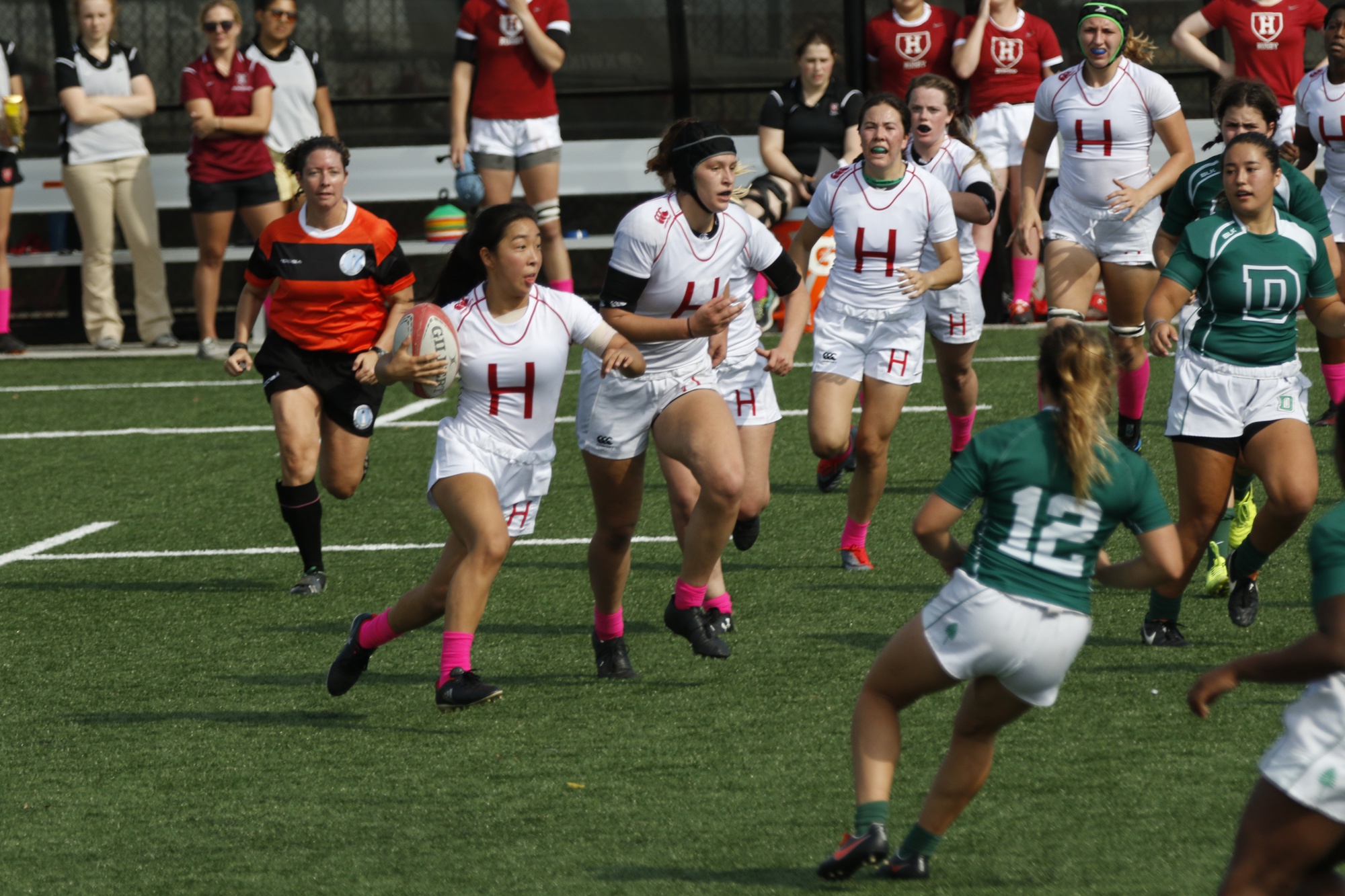 Harvard mounts an offensive attack against Dartmouth on Saturday in an attempt to respond to points the Big Green had made. By Timothy R. O'Meara
By Kim Arango, Crimson Staff Writer

On a warm Saturday afternoon at Mignone Field, the No. 4 Harvard-Radcliffe women’s rugby team (3-1-1, 1-1 Ivy) was unable to mount a comeback against the No. 1 Dartmouth College team in a 39-10 loss. This is the Crimson’s first loss of the season and puts Harvard at a 3-1-1 record for the season, 1-1 Ivy record, and an overall 6-8 record against the Big Green.

The match opened up with aggressive offense from Dartmouth against a staunch Crimson defense. The two teams struggled to push past each other for the first 15 minutes of the game with strong offense and defense from both. However, it was the Big Green that finally broke through the Harvard defense when freshman prop Idia Ihensehkien successfully scored a try to bring Dartmouth to a 5-0 lead.

“We experienced a lot of pressure from Dartmouth today,” sophomore flyhalf Delia Hellander said, “which we haven’t yet faced this season, so we struggled with our shape and executing our pattern play.”

The Big Green continued to pressure the Harvard defense. Five minutes affter the Crimson successfully thwarted and Dartmouth attempt and mounted an offense off of it, the Big Green had a successful try from junior flyhalf Camille Johnson followed by a conversion from junior scrumhalf Kat Ramage to widen the lead to 12-0. Heading into the half, the Harvard defense suffered one more blow when freshman center Lilly Durbin scored a try to give Dartmouth a 17-0 lead at whistle.

“This game was a great challenge,” sophomore Emily Prentice said “and pushed us to execute our system under pressure, moving forward we’ll be working on our execution and connections.”

The Crimson came back onto the field into the second half with renewed energy and a strong offensive display the opening minutes. With 28 minutes left in the second half, Harvard pushed through a mound of Dartmouth players allowing freshman Erin Wright to score the first Crimson try of the game, her personal first try of the season, to cut the lead to 17-5. The Big Green responded with two tries from senior Frankie Sands. Despite the best efforts of the Harvard defense, Dartmouth was able to increase its lead to 32-5 when sophomore Evan Klein scored a try followed by a successful conversion from Ramage.

However, despite its best efforts, Harvard was unable to mount a comeback with sophomore Berit DeGrandpre scoring one more try for the Big Green at the end of the match for a final scoreline of 39-10 Dartmouth.

“We just kept remembering that it was just a game,” Hellander said “and if we trusted in our training good things will happen. We used this game as a milestone to see where we are and we’ll use it to come back stronger for the next match.”