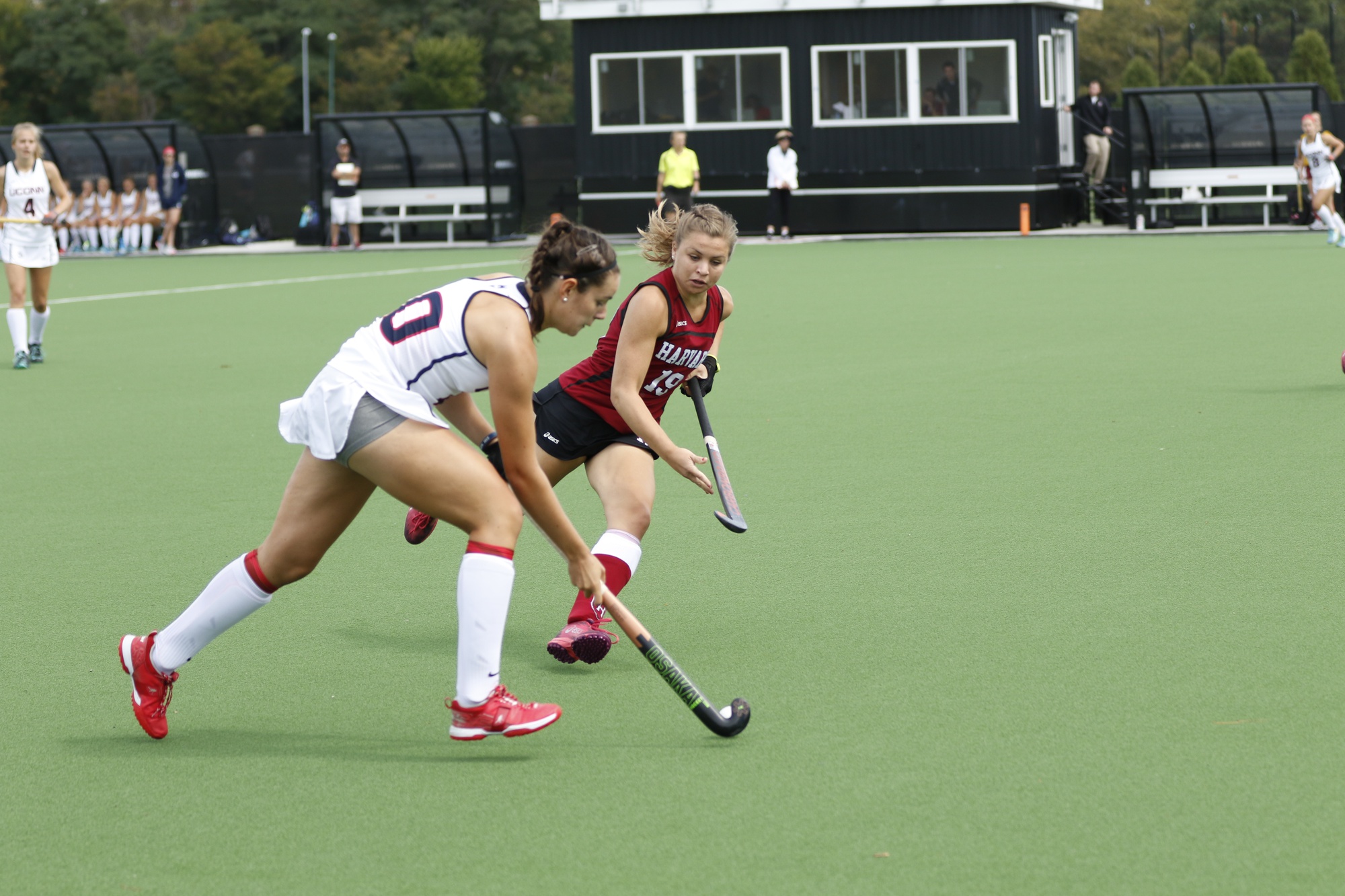 The field hockey team felt the loss of its leading scorer Kathleen Young this weekend, but still managed to overcome Cornell in overtime. By Timothy R. O'Meara
By Sean B. Chanicka, Crimson Staff Writer

After junior forward Kathleen Young suffered an injury in last week’s game against Boston College, Harvard Field Hockey knew that it would be facing a challenge going forward. Traveling to Ithaca this weekend, the Crimson had to quickly adapt to life without its leading scorer. In a highly contested game, Harvard (10-3; 4-0 Ivy) eventually overcame the Big Red (7-4; 1-3) 4-3 thanks to an overtime goal.

In what has become the norm this season, the Crimson began the game with a relentless attack on Cornell’s goal. This plan resulted in an early goal, as freshman midfielder Tessel Huibregsten collected the ball in the 3rd minute and fired her shot into the net.

Harvard didn’t need to wait long to get back on the scoresheet. In the 10th minute, sophomore midfielder Bente van Vlijmen fired a shot which was deflected by a Cornell defender. However, freshman forward Natalie Sicher recovered the deflection and fired off her own shot for the score. The goal was Sicher’s first of her career with the Crimson.

Facing a 2-0 deficit early on, Cornell knew that it needed to respond soon before the game got out of reach. In the 23rd minute, the Big Red scored its first goal of the game, as Grace Royer brought her team within 1. Both teams traded shots to end the half, but neither was able to score before the whistle blew.

Harvard opened the second half just as in the first, with a flurry of shots on net. After firing two shots on net, freshman Mimi Tarrant managed to score her first goal of the game in the 41st minute. After seeing one of her shots blocked by the Cornell goalkeeper, Tarrant quickly reacted to grab her miss and shoot again, this time into the back of the net. Her goal extended the lead to 3-1 and, for the moment, seemed to put the game out of reach for the Big Red.

Cornell, however, had other plans in mind. In the next 16 minutes of game time, Cornell managed to tie the game at 3-3. Just 8 minutes after Tarrant’s goal, Cornell pulled the game back to within one, as the team scored off of a penalty corner. In the 57th minute, Cornell senior Krysten Mayers stole the ball, raced into the circle, and fired her shot past senior goalkeeper Olivia Startup to even the game. With this goal, Mayers tied the Cornell record for career points and goals with 94 and 40, respectively.

In the waning minutes of regulation play, each team found itself with multiple chances to score, yet neither was able to get the decisive goal. In an overtime period that saw more fouls (4) than shots (2), Harvard ultimately triumphed with its goal in the 75th minute. Following a series of fouls by both teams, junior midfielder Emily Duarte shot the ball on net, but saw her attempt saved by the Cornell goalkeeper. However, Tarrant, just as she had earlier in the game, collected the rebound off the save and tucked her shot behind the goalkeeper to seal the game.

Following this week’s action, Harvard keeps its focus on Ivy league play as it returns home for a much anticipated matchup against Princeton. The Tigers, also undefeated in Ivy league play following an 11-1 victory at Brown, will be Harvard’s main competition in its quest for another Ivy League title.