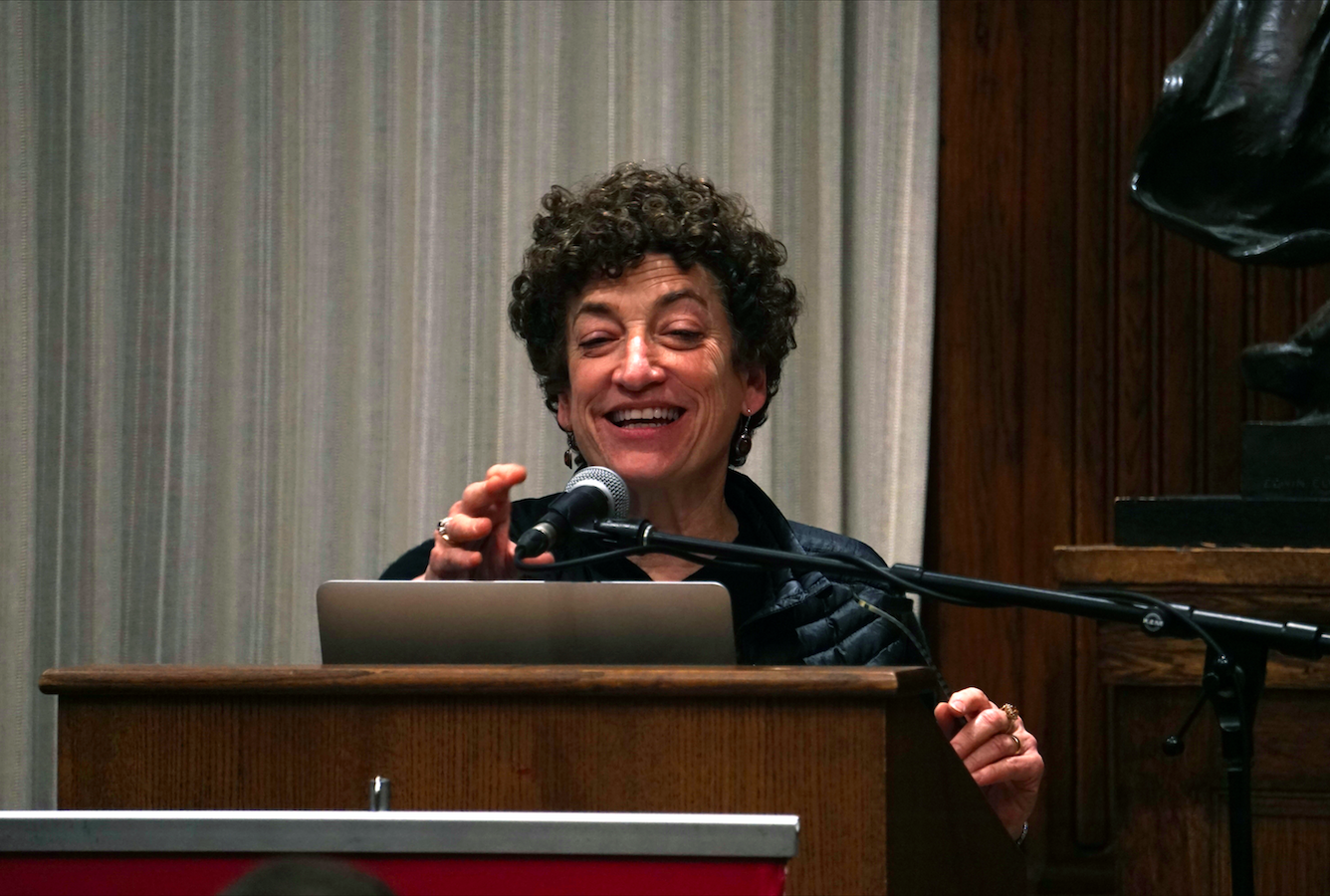 Naomi Oreskes, professor of history of science, discusses the history of scientific naysayers and how history is repeating itself with Trump’s climate change policies on Wednesday evening in the Barker Center. By Justin F. Gonzalez
By Hamid A. Khan, Contributing Writer

Naomi Oreskes, professor of history of science and affiliated professor of earth and planetary sciences, discussed corporate efforts to intentionally spread false information about products throughout the twentieth century during a forum hosted by the Mahindra Center of Humanities on Wednesday evening.

Her lecture, titled “Giant Power: Technology, Energy, and the History of Post-Truth America,” marked the second year of the annual Environmental Forum. In 2010, Oreskes co-authored the book “Merchants of Doubt: How a Handful of Scientists Obscured the Truth on Issues from Tobacco Smoke to Global Warming” on the same subject.

She argued that these corporations appealed to notions of free market capitalism and freedom to preserve deregulated industries.

“Who can possibly be against freedom?” Oreskes asked.

Oreskes focused on the example of the National Electric Light Association, which embarked on a public advertising campaign against the public provision of electricity in the 1930s. She added that NELA used several “front” organizations to fund a campaign to use the education system to promote values of free enterprise.

Oreskes claimed that NELA funded the alteration of syllabi taught in high schools and higher education institutions across the United States and paid textbook authors to update their books to indoctrinate the public against any sort of government regulation. She said “[NELA] pressured institutions to drop textbooks which they considered objectionable” adding that that terms such as “reasonable rates,” “public utility,” and “stock bordering” were terms that NELA sought to exclude.

“I think it is pretty obvious that there are awful lot of similarities to recent events,” Oreskes said, noting the resemblance between the NELA advertising campaign and the public relations company The Advancement of Sound Science Center, founded by cigarette-producer Philip Morris. She explained how both NELA and TASSC use the “merchant of doubt strategy” to sway public opinion.

Oreskes ended her lecture by stressing the importance of academia in drawing attention to such issues. She said that not enough academic research exists presently to counter the intentional spread of inaccurate information by corporations.

Eric D. Grunebaum ’84 said he was struck by Oreskes’s insightfulness: “I think that the fact that [Oreskes] is willing to say that there are objective facts and that there are not equivalences to both sides of every issue sets her apart.”