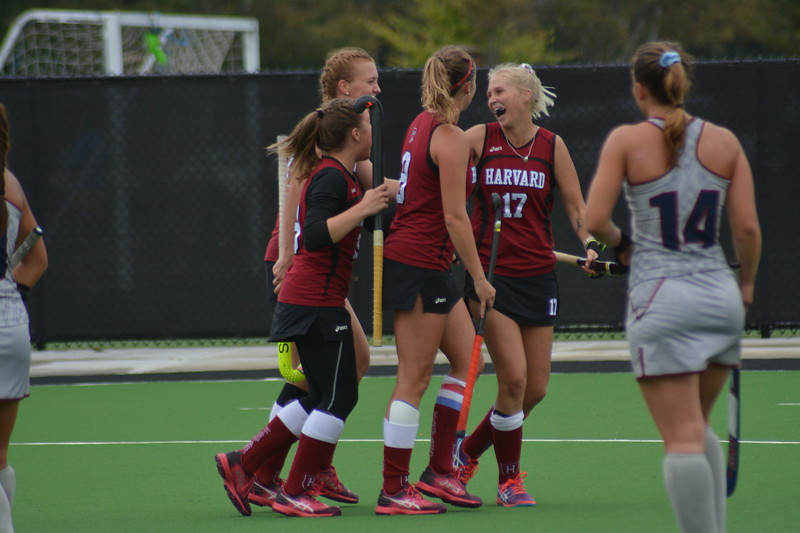 Co-Captain Ellie Cookson was one of Harvard's six goal scorers on Saturday afternoon. After beating Penn, 6-0, the Crimson extended its winning streak to six games. By Timothy R. O'Meara
By Sean B. Chanicka, Crimson Staff Writer

Despite facing off against a Quakers team that had won four out of its last five games, the Crimson relied on its stingy defense and potent attack to emerge with a comprehensive 6-0 victory. With the result, Harvard extends its winning streak to six games. Over this span, the Crimson has outscored its opponents by a 31-5 margin.

On a day where six different players each scored one goal for Harvard, sophomore Maddie Earle got the action started in the 8th minute. After coming on as a substitute in the 6th minute, freshman forward Tessel Huibregsten played a pass that was redirected to Earle, who shot from the nearside for the opening goal.

In the 18th minute, junior forward Kathleen Young collected the ball from 30 yards out. After making a run towards goal, she fired her shot from a tight angle past the Penn goalkeeper for the score. The goal, Young’s 8th of the year, extended her scoring streak to seven games. During her personal streak, Young has scored 17 points on the strength of 7 goals and 2 assists.

“Kathleen can change the entire game with the unique energy that she brings,” sophomore midfielder Bente van Vlijmen said. “She could just take the ball, beat the defender to the circle for the score, and get the team into the flow that we need. The energy she brings and the way she speeds up our play is so incredibly important and so beautiful to see. This weekend, she showed how amazing she is.”

In the 27th minute, co-captain and midfielder Ellie Cookson scored her first goal of the season on a turnaround shot near goal. Then, freshman forward Mimi Tarrant closed out the Crimson’s high scoring first half with her goal off a reverse stick shot in the 35th minute. Tarrant, who now has tallied 17 points on the season, leads all Ivy League freshmen in the category.

By going into the half up by four goals, Harvard continued its recent trend of starting games with an unrelenting attack. Over the course of its six game win streak, the Crimson has scored an average of 2.6 goals with an average of 7.3 shots in the first half.

The second half saw the home team continue to put on a strong offensive display. In the 48th minute, van Vlijmen scored off of a penalty corner to extend Harvard’s lead to 5-0. In the 62nd minute, senior midfielder Emily Ott scored her first goal of the season to cap off the Crimson’s offensive outburst.

In addition to a strong offensive effort, Harvard relied once again on its back line to get a decisive result. The team outshot Penn 17-5, with the Quakers failing to register a single shot on target. As for penalty corners, the Crimson only conceded one while taking 8 of its own. Junior goalkeeper Libby Manela earned her third win of the season and her second shutout with the result.

Harvard hopes to continue its strong run of play when it returns to action on Friday against Brown. While the Bears do enter with a losing record, they remain a dangerous opponent, one the Crimson will have to overcome on its quest for an Ivy League title.

“Our method is to take it game by game, and approach each game as we prepare for whoever it is,” Harvard coach Tjerk van Herwaarden said. “If we keep doing the right things and keep developing ourselves, then we will put ourselves in a great position to be successful.