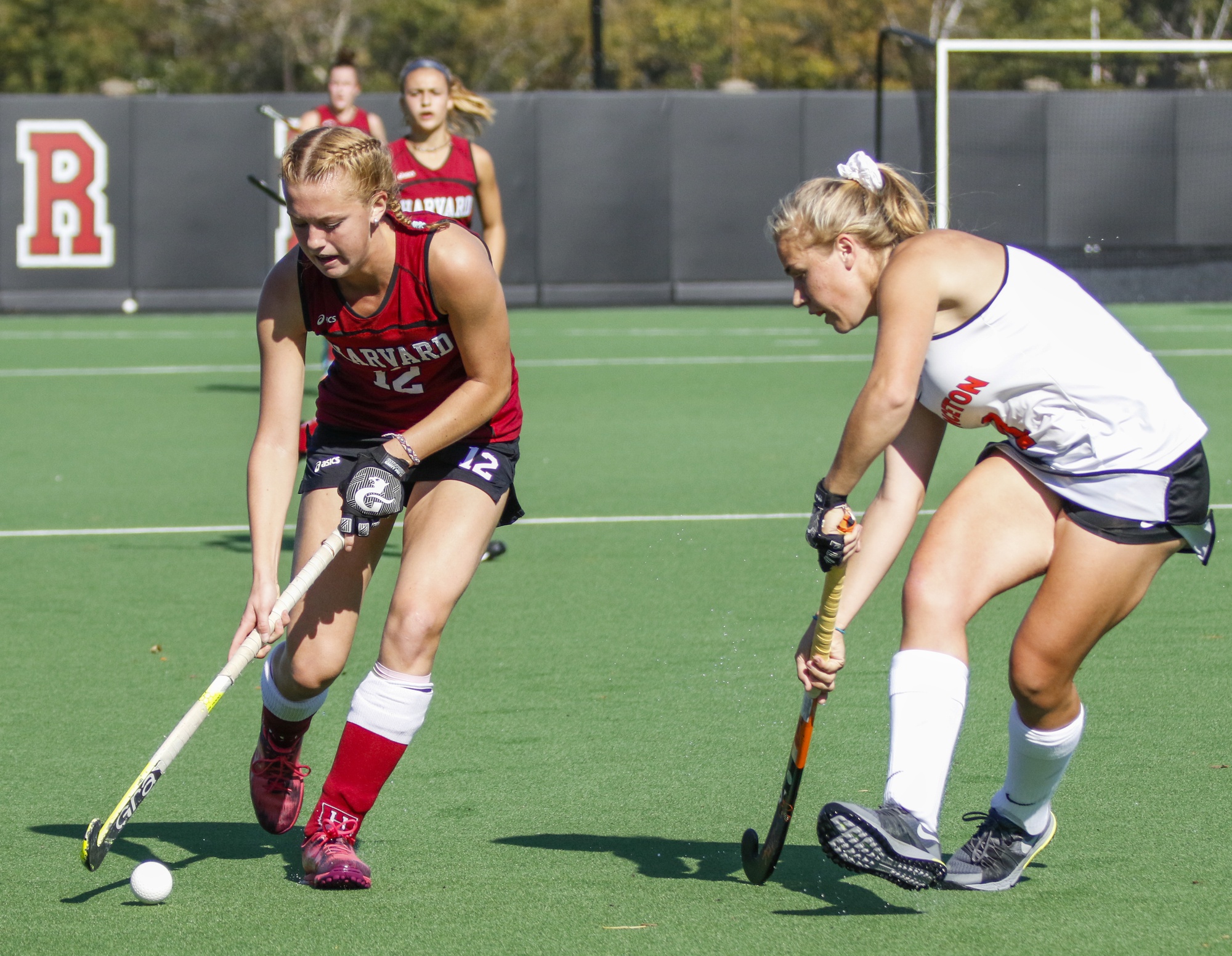 Freshman Mimi Tarrant looks for a way around a Princeton defender. The Tigers shutout the Harvard offense in the 3-0 rout.
By Sean B. Chanicka, Crimson Staff Writer

For all intents and purposes, Saturday’s matchup between No. 15 Harvard and No. 14 Princeton was likely the Ivy League championship. Last year’s overtime bout ended with the Crimson on top and earned them the respective Ancient Eight crown. This year, they were not so fortunate.

In the defensive battle at Berylson Field—where neither team recorded more than 10 shots—the Tigers got their revenge on Harvard taking the match, 3-0.

As has become the norm, the Crimson (10-4, 4-1 Ivy) began the game with a furious attack on the Tiger’s (9-6, 5-0) net. However, Harvard’s chances were rebuffed by Princeton goalkeeper Grace Baylis. In the 10th minute, freshman midfielder Tessel Huibregsten saw her shot from the left kicked away by Baylis. And so would be the theme for the afternoon. Consistently, great scoring opportunities were stopped by an even better defensive showing from the Tigers.

“We knew it was going to be very competitive and, unfortunately, it did not fall our way,” said Crimson coach Tjerk van Herwaarden. “We had difficulty closing in the circle. Towards the end of the second half, we kept pushing forward to try and get that equalizer. However, they made some plays in the backfield which prevented us from getting those goals.”

In the 22nd minute, Princeton scored the game’s opening goal. Off of a penalty corner, sophomore midfielder Maddie Bacskai collected a rebound and fired her shot into the back of the net.

Just before the stroke of halftime, Harvard found itself with a great chance to tie the game. After a Tiger shot on net, junior defender Olivia Allin managed to clear the ball off the line to prevent the goal. After recovering the ball, the Crimson was able to attack in transition. A foul granted the team a penalty corner, however, sophomore midfielder Bente van Vlijmen was unable to convert the opportunity. Harvard went into the half trailing 1-0.

The Crimson began the second half similarly to the first, with a focused attack on the Princeton net. But, just as before, while the Tigers’ defense bent, it did not break. In the 49th minute, freshman forward Mimi Tarrant saw her close shot blocked. Just five minutes later, the Princeton lead was doubled as freshman midfielder Emma Street scored on a rebound following a penalty corner.

The Tigers would put the game away with its third goal in the 64th minute. Princeton’s freshman midfielder Julianna Tornetta’s beat Harvard junior goalkeeper, Libby Manela, to a rebound and tapped the ball in for the score.

With the result, the Crimson saw its 13-game Ivy league win streak snapped. Saturday’s result was also the team’s first time being shutout since facing Cornell in 2015. For the Tigers, the team has now gone 206 minutes without conceding a goal, over which time it has recorded two shutouts—the other coming against Northeastern.

“Everyone has things they can work on,” senior goalkeeper Olivia Startup said. “It wasn’t as though the game came down to any one issue or individual. But, we can’t allow ourselves to get defeated when we are down, because this was a new situation for us this season. It was a big lesson for us moving forward for this season, and future ones as well.”

Following Saturday’s action, Harvard returns to play midweek as it faces off against Boston University on Tuesday before hosting Dartmouth on Saturday. The team knows that—while the chances of a repeat Ancient Eight title have decreased—the season is far from over.

“The big thing for us is to make sure we don’t have any regrets,” Herwaarden said. “Every single game starts for 0-0. The Ivy League games do bring a competitive edge to every team. We know that and prepare for it. Regardless, we have the chance to compete for a 13 win season, which would be a fantastic accomplishment for us. There is still a lot for us to gain from the season.”