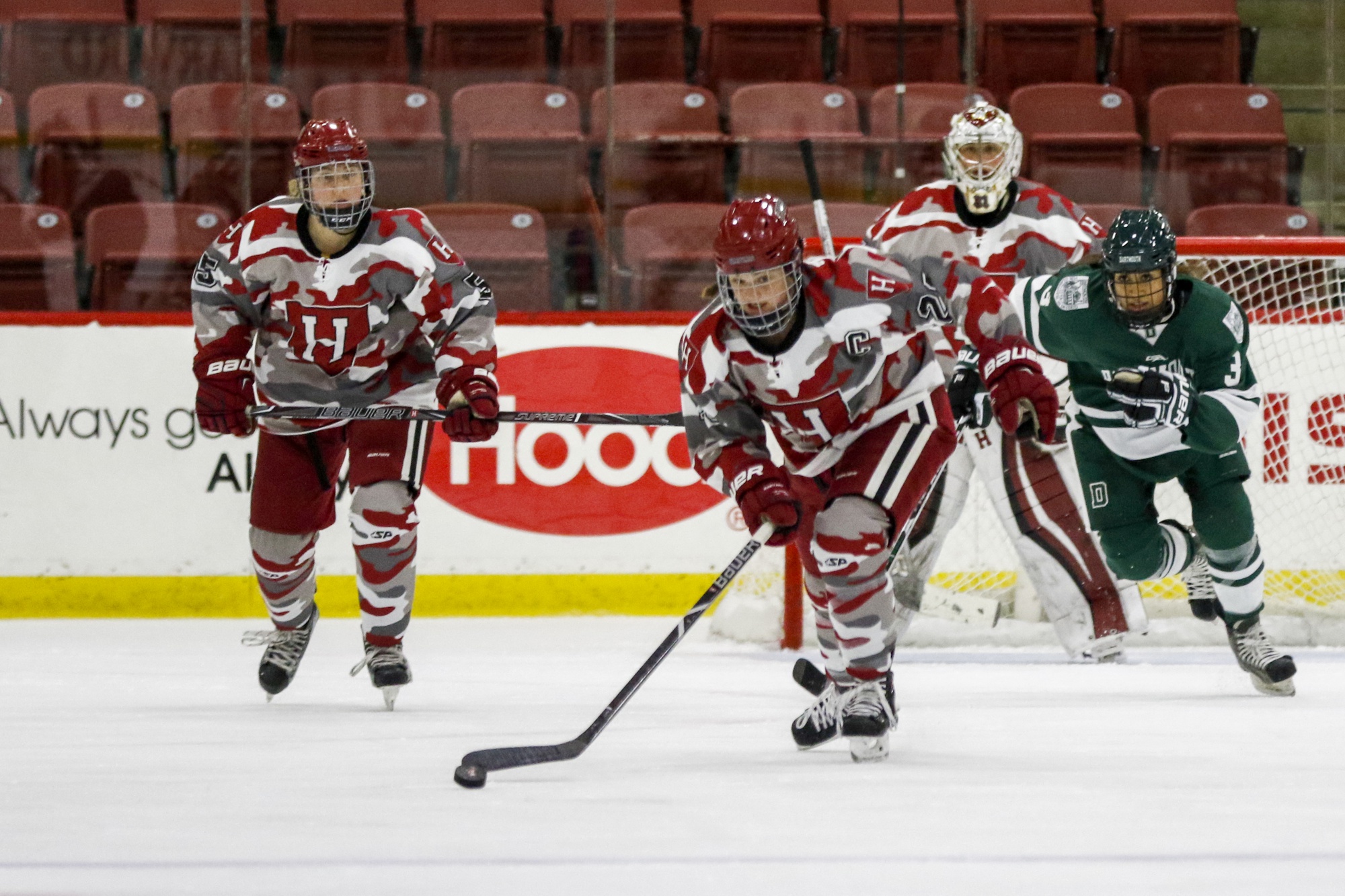 Captain Haley Mullins helps to clear the puck from Harvard’s half of the ice in the season opener against Dartmouth.
By Sean B. Chanicka, Crimson Staff Writer

Led by its underclassmen, who contributed eight total points, women’s ice hockey defeated Dartmouth 4-1 on Saturday in its season opener at the Bright Landry Center. The night was a total team effort for Harvard with four different players guiding successful shots into the back of the Big Green net.

“One of the biggest things Harvard hockey harps on is the team first mentality,” sophomore goalkeeper Beth Larcom said. “Any game we play, any practice, we’re going to have that mentality. The Dartmouth game was the epitome of that mantra with so many people getting on the score sheet. As coach likes to say, we’re an army of one.”

The first goal of the night for the Crimson (1-0, 1-0 ECAC) came at the conclusion of its second power play. As the timer on the power play expired, freshman forward Keely Moy played a pass to senior forward Lexie Laing, whose shot found its way to the back of the net.

Harvard’s second goal also came off of a power play opportunity. At 14:14 in the second period, the team held a two player advantage, with two Big Green players penalized for interference and cross checking, respectively. Taking advantage of the situation, sophomore forward Val Turgeon played a pass to sophomore forward Kat Hughes at the point. Hughes then fired her shot which rattled off of the net and in for the second point.

Dartmouth (0-1, 0-1) also managed to use the power play to its advantage. At 11:24 in the third period, the Big Green won an offensive zone faceoff. Collecting the puck, junior defender Caroline Shaunessy fired her shot top shelf to put Dartmouth on the board, 2-1.

Undeterred by Shaunessy’s goal, the Crimson didn’t need to wait long to reply. Just two minutes after, Harvard initiated a power play. At 13:44 in the third period, senior defender Chelsea Ziadie flicked a wrist shot from the top of the right circle for the score.

“Our power play looked good,” junior defender Kaitlin Tse said. “Overall, we want to build off of every aspect of our game as we go throughout the season. That way we can improve and be ready to face any opponent.”

With a firm lead in place, freshman forward Brooke Jovanovich went on to provide the Crimson with an additional insurance goal. At 15:44, Jovanovich broke off on a run where she split two Dartmouth defenders before slotting her shot past the goalkeeper for the score.

This game was one in which the Crimson offense dominated from beginning to end. In total, Harvard outshot the Big Green 43 to 24. On defense, Larcom saved 23 of Dartmouth’s 24 shots. In addition, the team’s defense held strong on power plays, stopping the Big Green on six of its seven opportunities.

“It was a great game,” Tse said. “Collectively we played well to earn a great team win. We had scorers across the board, from upperclassmen to underclassmen. We’re not going to settle; we have big upcoming games against Princeton and Columbia that we want to be prepared for.”