Lightweight Crew Teams Medal in Head of the Charles Regatta 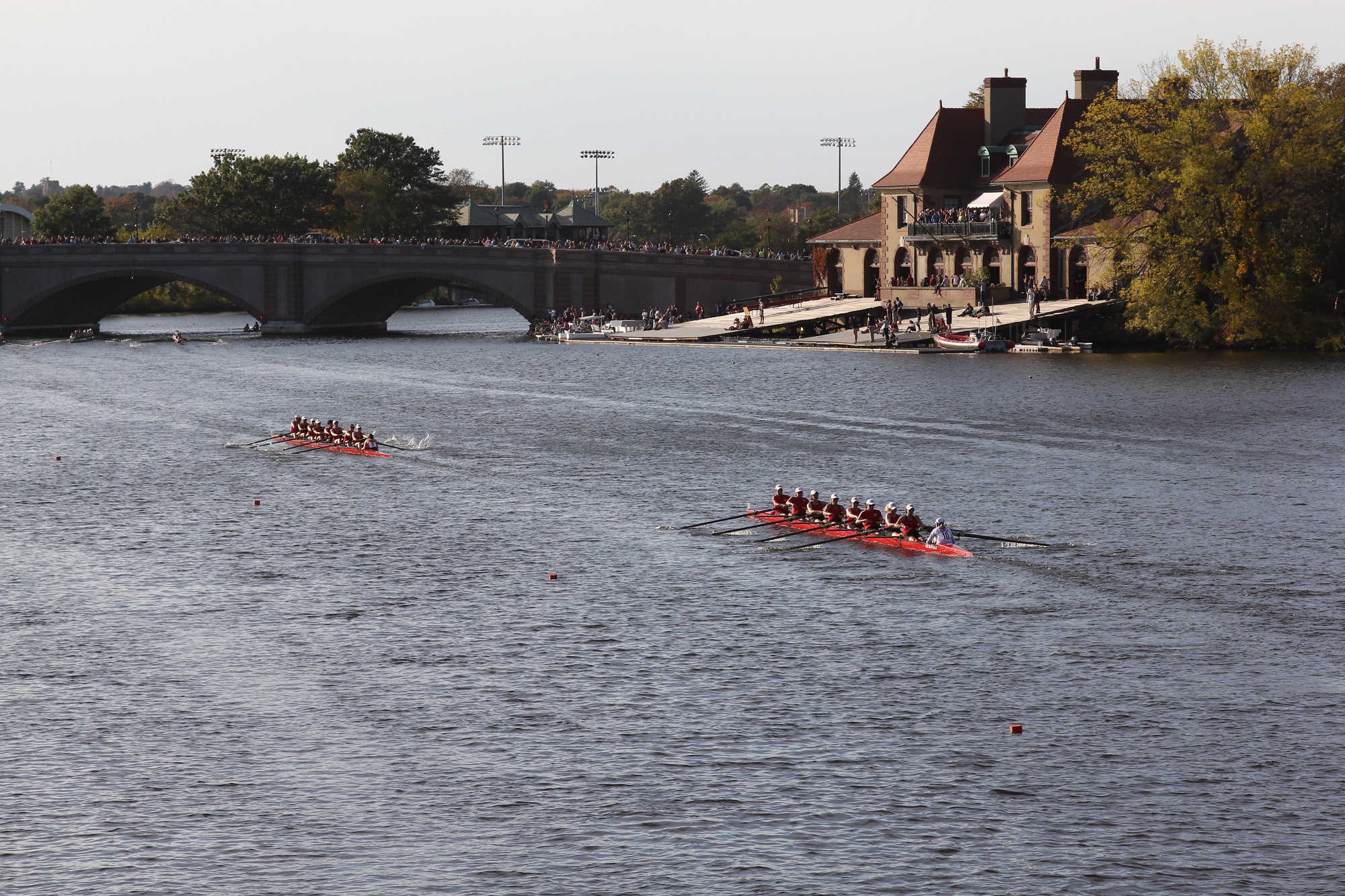 Both of Harvard’s lightweight teams earned bronze medals in one of their races, the teams’ best results of the weekend.
By Eamon J. McLoughlin, Contributing Writer

Spirits and temperatures were high along the Charles River Saturday and Sunday, as over 11,000 athletes—along with tens of thousands of spectators—gathered for the 53rd Head of the Charles Regatta. Countless rowers from across the country and around the globe competed for their shot at the coveted title in 66 different races.

“It’s a really exciting weekend to get to race in one of the biggest stages when it comes to rowing,” said senior heavyweight rower Hailey Novis. “I think a lot of us have, at this point, competed on big stages, but just like always, anything can happen, so it’s hard to prepare for things like this. You just have to trust that you put in the work and the time, and [that] it will pay off.”

Given the course’s known difficulty—a result of its five triple-arch bridges—home field advantage proved to be particularly important for the Crimson.

Harvard was well represented at the race, as the men’s and women’s lightweight and heavyweight teams—along with a variety of alumni and club teams—participated in various events over the course of the weekend.

The Crimson teams represented posted impressive all-around performances in both the men’s and women’s categories, collectively taking home a couple of bronze medals, along with a fourth place finish.

The weekend’s top performances for Harvard came courtesy of the lightweight teams, with both the men’s and women’s teams medalling in the latter races of the weekend.

The Crimson women’s lightweights finished third out of eight boats in the lightweight eights, clocking in with a final time of 15:54.28, less than one second behind Boston University, who claimed silver. Stanford finished first in that event, coming in roughly eight seconds ahead of the Harvard boat. They competed also in the fours event, where they ended up as the sixth boat out of eleven with a time of 18:32.12. Georgetown took the top spot in the hotly-contested battle.

The men’s lightweights took home a bronze medal out of 16 boats in the eights division, with a final time of 14:05.27. The race was close up until the very end, as Harvard eventually was edged out by two Ivy League rivals. Princeton took home gold and while Cornell snagged silver a mere four and a half seconds ahead of the Crimson.

“It was a bit disappointing because we always want to win on our home course,” heavyweight captain Conor Harrity said. “In the men’s championship eights, our varsity executed well. Unfortunately, it wasn’t enough to win.”

The Harvard women’s heavyweights had a middle of the pack finish, taking 16 out of 36 boats in the women’s championship eights, in an event which Washington ended up winning. The Black and White fared similarly in the championship fours, finishing eighth in a competitive field of 16, of which Brown took home gold.

“We had three boats race in the Champ-4 and two in the Champ-8, and they did really well compared to last year,” Novis said. “We’re really excited that we’re getting to see some definite improvements.”

The Harvard men’s and women’s teams will look to capitalize on the experience of this weekend moving forward. With only one race remaining in the fall season, the Foot of the Charles, the Crimson will turn its attention toward finishing strong heading into spring training.

“The Head of the Charles is an important race and we always want to win.” Harrity said. “However, our racing season is in the spring, and we’re looking forward to race side-by-side against other teams in our dual season, at Eastern Sprints, and the [Intercollegiate Rowing Association Championships].”